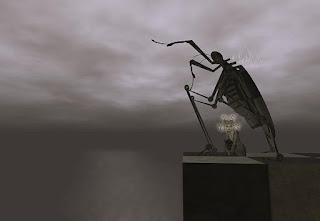 I mentioned a while ago that I received a grant from the Canadian government to work on some second life projects.  One part of the grant is to make a 30 minute machinima of the Daughter of Gears, Rabbicorn and its final part Standby.    Right now Immersiva has both the Daughter of Gears and Rabbicorn on it and I have nearly finished filming.  Once I am done I will be deleting both narratives in order to put down Standby for filming.  Then I will be tearing that down to start building a new and really exciting (to me) build for the grant called Virginia Alone.
So I am just letting those of you who are interested know that once I take down those two builds it is unlikely they will go up again in Second Life.  Go see them now if you wish to see them.  The tower in the middle is the first part of the story.  It is called the Daughter of Gears and tells a story in poems as you climb it.  The second part is called the Rabbicorn story and starts here at this slurl...

If you prefer you can watch the Daughter of Gears machinima at the start of the Rabbicorn build rather than climb it (which is quite hard to do).  You will find a ball to click by the start that contains the machinima.  The Rabbicorn story has 13 scenes each with a poem to find and a teleport to the next scene in the narrative.  If you plan on coming to Immersiva to see the final part "Standby" then please experience the first two parts or watch the movies.  I always seem to take down a build only to have someone ask the next day where to find it.  It is the fleeting nature of SL art and machinima doesn't properly express the unique nature of an open ended immersive environment so do come see it if that interests you.


I will also be moving back from Second Life over the next little while.  I won't be leaving completely just perhaps stepping back a bit.  I miss the simplicity of just creating.  That is really what I am passionate about and lately it seems all around me is gossip, politics  and distrust.  And that is because I have placed myself within that environment.  Working with the artists from the Path was such a pleasure as the atmosphere was so positive and encouraging.  The result of what we achieved was inspiring to me.  I want to refocus.

Anonymous said…
Bless you Bryn Oh. Your creative artistic approach is very much inspiring in both creativity and speech.

I am sorry you have meet the political goop-soup on SL which turned a once creative tool into a tabloid for ridicule and judgement.

SL however is one small, tiny section of the world and cannot deem what is or what is freedom of expression.
October 26, 2011 at 3:43 PM

SoCk Moments said…
Good for you, Bryn! I think it is important to take a step back and regain perspective when one starts to realize the passions that drove one to finding joy in the process have diminished, changed, been compromised and/or disappeared. Just as the projects change, so do we by sheer nature of the human experience. We are as much an artistic form of expression as the works we create, and therefore we, too, must continually be mindful and try to keep the proper focus. If other people are interfering with your process of creating joy, then you must re-evaluate to find the best solution.

I love your work, Bryn, and I absolutely love that you have found a way to do it with such wide and deep support. I hope you are able to find what you are searching for in this new prospect of adventure! Thank you for your brave example.
October 27, 2011 at 12:32 PM

Runescape Money said…
Your cats turns into a hellcat right after killing so many hell rats Cheap Runescape Gold, just feed it typical milk to turn it regular once more.Feed the right stew to Dave in the banquet hall, sub quest 5 complete.When you Inspect Skrach Uglogwee, then go and speak to Rantz in the Feldip Hills about saving him. Head over to he southeast at water's edge Buy RS Gold. Tell him you will need a boat to Karamja, which can be exactly where he points to.
January 24, 2012 at 2:59 AM