Imogen and the pigeons - machinima


Last year I received a grant from the Ontario Arts Council to create a machinima, among other things, for Imogen and the pigeons from which the Singularity of Kumiko is the prequel.  I would like to thank Jenna Stillman and Loreen Legion for lending their talents in voice and for Loreen, the ambient music score.  Many experienced the Singularity of Kumiko and were surprised at the ending which showed Kumiko to be the daughter of Imogen.  The story of what happened to Kumiko describes the events which broke Imogen, placing her within the institution.  Many others no doubt had no idea who Imogen was, if that was you and you would like to know how she connected to the Singularity of Kumiko then I have listed a series of blog posts I had done explaining the story for Imogen and the pigeons and all its little parts.  Some posts explain rooms and compositional elements
while others just post poems and such. 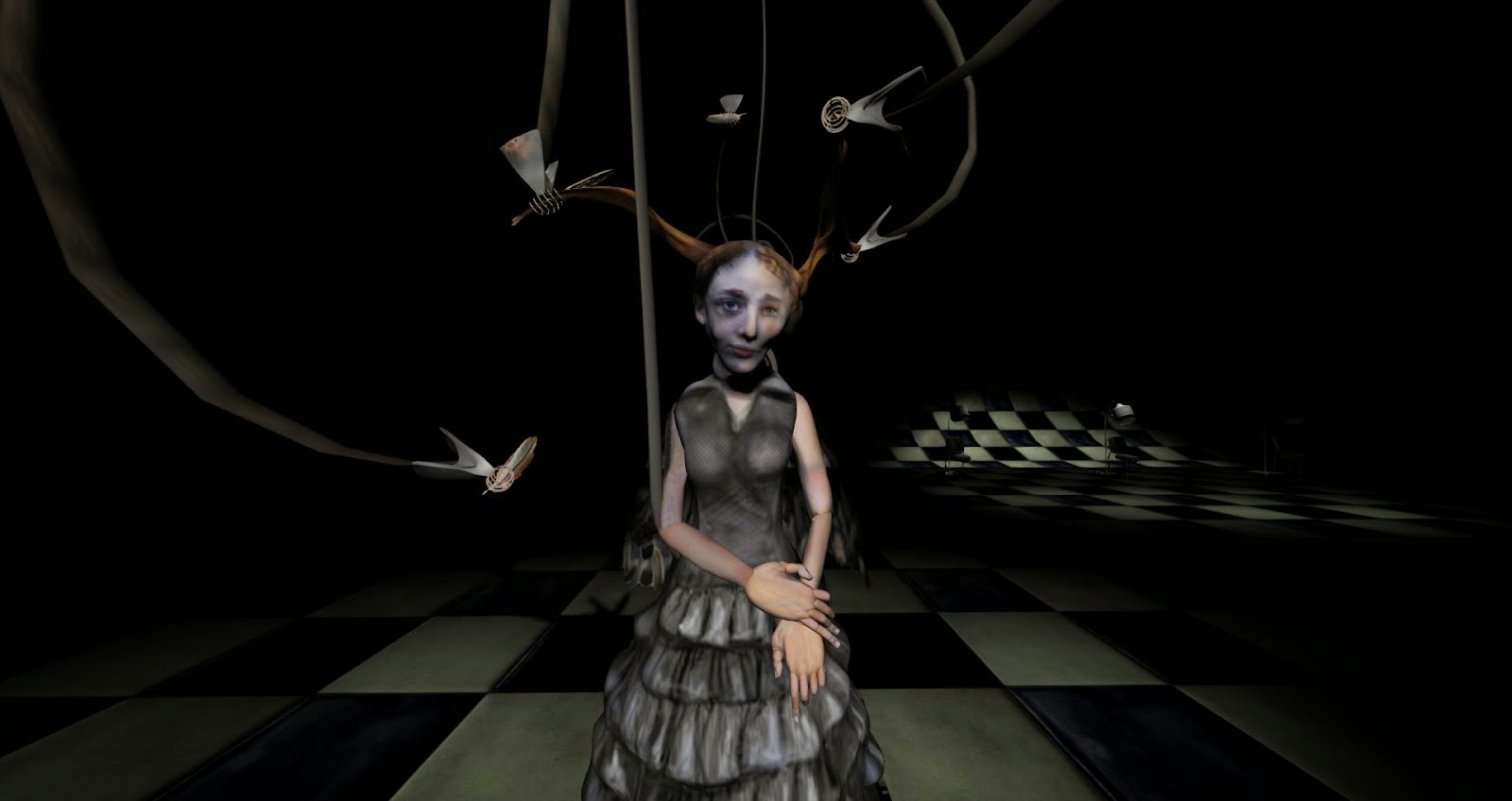 http://brynoh.blogspot.ca/2013/05/imogen-and-pigeons-zeroes-and-ones.html
Posted by Bryn Oh at 5:32 PM No comments: Links to this post

A while ago I was contacted by Art Blue in order to create a bunch of Bryn Oh Calendars featuring
my art work.  Jami Mills, Ziki Questi and Art created a really beautiful calendar and I have just received 10 in the mail.  Art produced the calendar for a specific purpose, hundreds were sent out to various museums and galleries across the United States and Europe with a simple message for the curators.  I will post it below.

Digital art might not fit into any particular category of your institution just now, nor might it be a key target of your collection, but in a few years it might be different.  40 years ago when I was in high school, I made my first steps into this field, so I know the history.  I had only  a computer driven pencil, a plotter as it is now called.  Now we live in the Metaverse - "just in a few years' time we will all meet there", says George Bloom, director at CBS Digital.

Enjoy this first calendar of Bryn Oh, a virtual artist and pioneer in this field.  Please store it; keep it in your archives for the future.  That's all we are asking.  Many works that artists created with computers 40, 50, 60 years ago are now lost, and few have been preserved well enough to present to the public.

We offer you the opportunity to download the prints as raw screenshots [png files] in a 6,016 x 6,016 pixel format for exhibition purposes.  Send us an email with a full imprint and I would be happy to send you the links to download.  You may print and reproduce them after receiving a confirmation from our foundation.  There are no costs involved; we simply wish to ensure they are presented with the highest quality.

Jami Mills, editor of rez magazine, will be happy to send you some text for publication that is suited to the prints.

Art has proved to be quite the patron as he has also purchased both my Daughter of Gears oil painting and "Mask" an oil painting I did of my avatar.

I have now 9 calendars which I was not sure what do with.  I have decided to sell them as a way to create income to help pay tier for my virtual region Immersiva.  To be upfront, it costs me $300 USD a month to keep Immersiva and the money raised would go exclusively towards paying tier and whatever costs are associated with mailing out the calendar.  So if you have enjoyed my work over the years and would like something physical to remember it by, would
like to be a patron or simply to donate then feel free to contact me for a calendar.  You are welcome to donate as much as you like naturally, but a minimum of $100 USD is fine for the calendar in lindens, paypal or whatever.  I can also sign it, just let me know if you would like that.

I would like to thank Art Blue, Jami Mills and Ziki questi among others for their selfless and generous desire to preserve my artwork.  It is a great deal of time and effort not to mention expense to create these calendars and they do so because they feel the art created in virtual environments are important and worth preserving.
Posted by Bryn Oh at 3:46 PM 4 comments: Links to this post 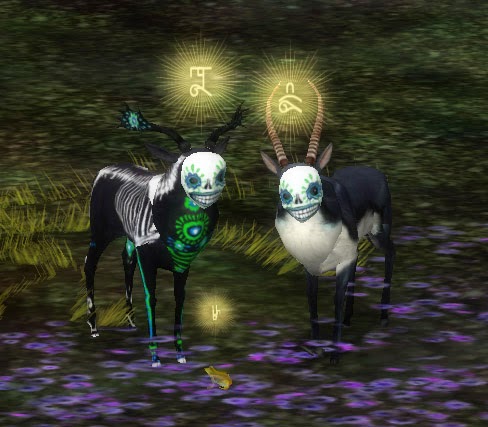 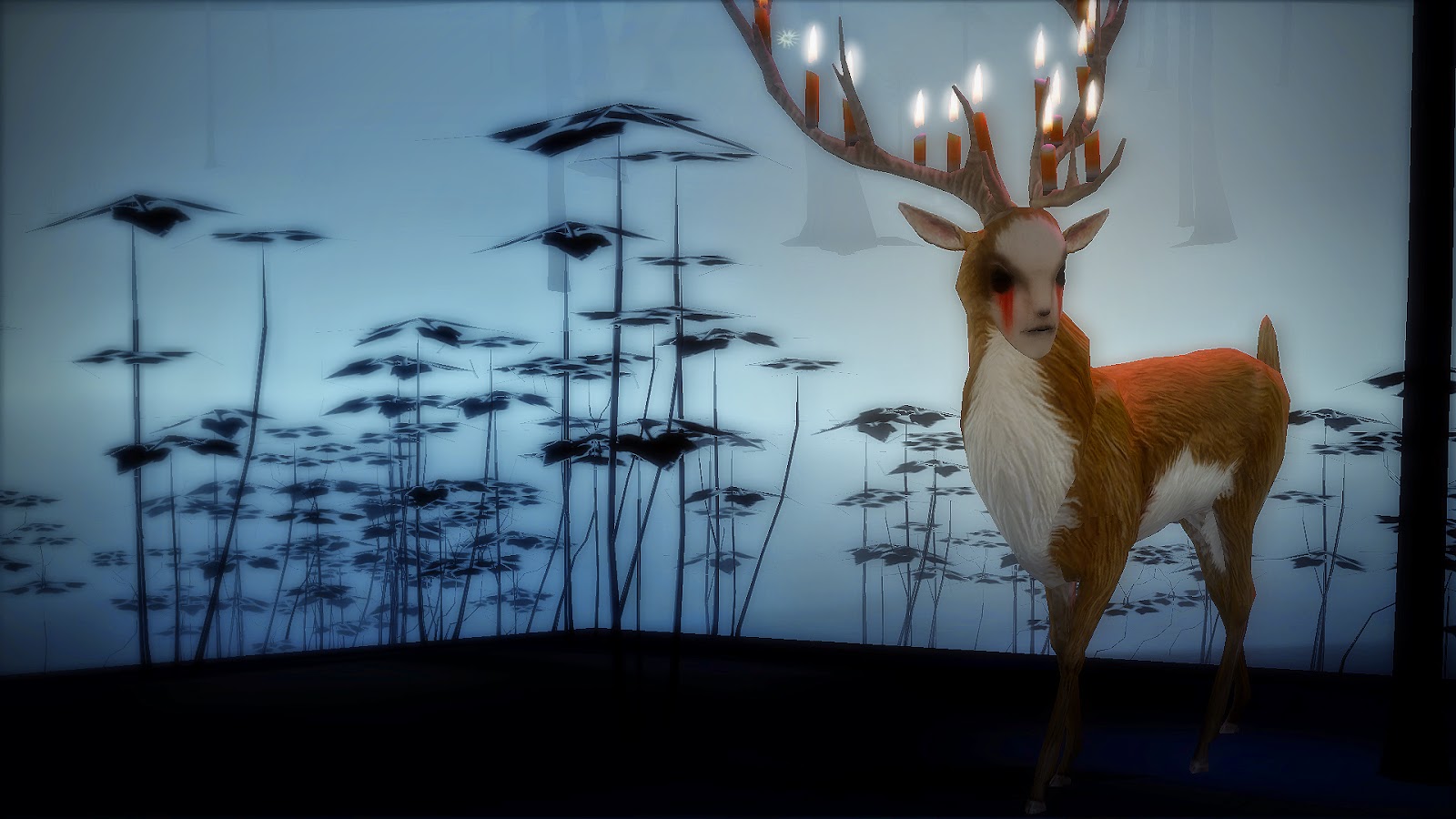 A while ago I discovered Tale of Tales a small company or studio run by Auriea Harvey and Michaël Samyn out of Belgium.  Together they create unique ways to think about experiences that we would classify as video games.  The first one I discovered, quite by accident, and explored with my friend ColeMarie Soleil was called Endless Forest.   In a previous post I talked about how I have been trying out video games that get ratings of around 90% or so to see why they are so popular, Endless Forest didn't get rated by anyone and is the bane of teenage boys from what I can see online.  Despite this I quite like the idea of it.  Some video games I have come to see as contemporary works of art whose focus is on interaction, immersion and usually narrative.  Many of the best ones I have come across have been open ended too.. meaning that you can pretty much go wherever you wish without following a linear path as we are accustomed to do in cinema and other forms of art.  In the good experiences we are active participants rather than passive observers, and that, as you already know if you follow my blog, is the type of art experiences I attempt to create in the virtual world of Second Life. 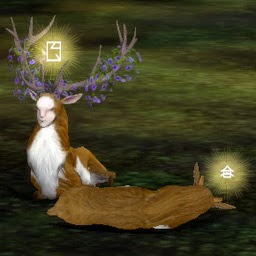 The vast majority of video games I come across involve some type of violence and most try to include at least one exploding head.  The developers tend to follow a well trodden successful path for the majority of players, so when I see a new way of thinking it always intrigues me.  It is a brave thing to take a chance on something which completely goes against the current trends of success.  That is what Tale of Tales tends to do with most of their work.  In endless forest there is no goal.  You arrive to a forest as a baby deer or foal.  Above your head is a unique glowing symbol which is you, and what others recognize you by.  You will come across other deer and will realize quite quickly that there is no way to communicate with them.  There is no typing out text to one another but instead you have a variety of ways to communicate with 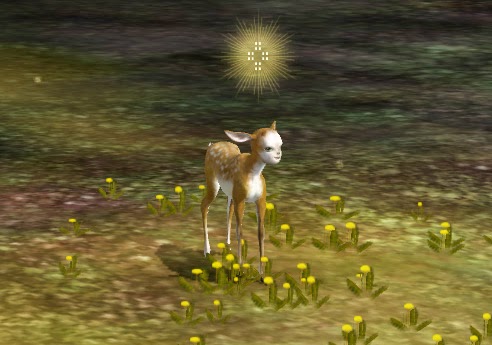 body language.  Shake your head, rear up onto your back legs and so on.  It is a community embracing the absence of normal communication, and then what happens in that environment.  It was interesting to me how simplified the language became and how simplistic the pleasures became.  From wandering around to comfortably laying close to another deer.  I remember over time a little doe began to follow me around and get genuinely excited when we would bump into each other in the forest.  It was both bizarre and adorable at once. 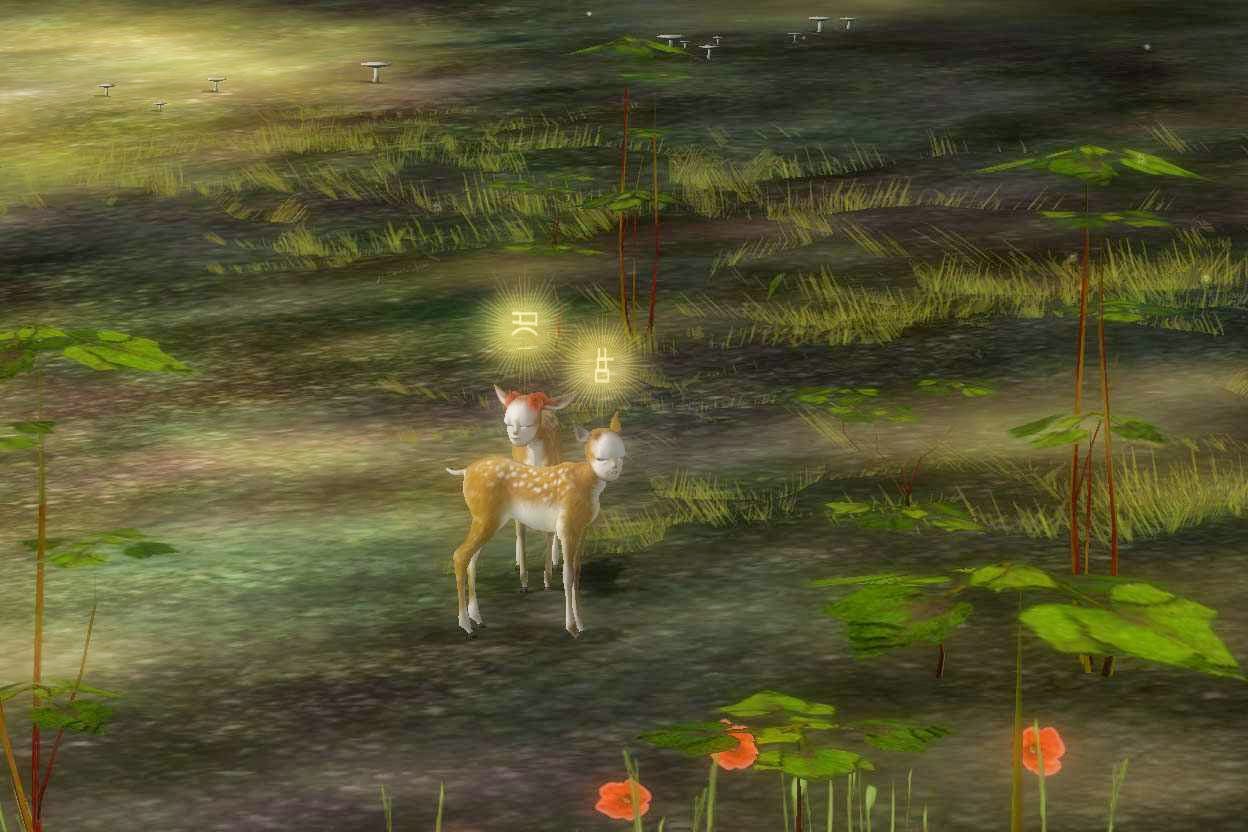 Now I am not suggesting this is a game you would play for months on end, but rather an experience to have, to think about, then move on from.  Many would no doubt find it stupid, boring and odd yet I do quite enjoy odd so that is why I am including it.  It is a uniquely strange and beautiful experience at a vastly slower pace than a large game developer would dare attempt and I respect them for thinking of then creating it.  It is original as well as a different way to use the medium, so if you would also like to try it then you can download it here.  The Endless Forest
Posted by Bryn Oh at 6:27 PM 1 comment: Links to this post