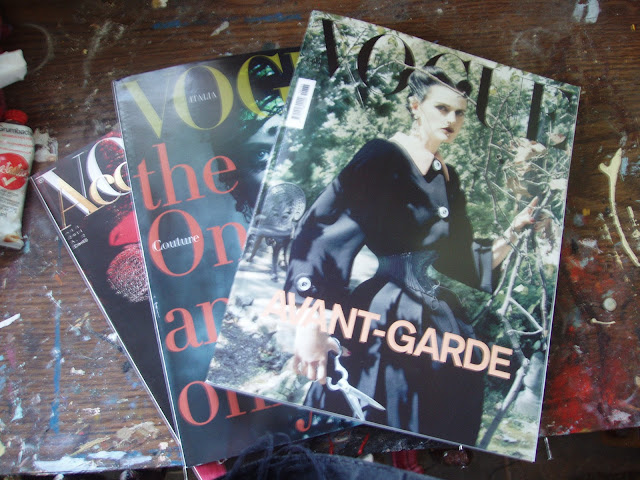 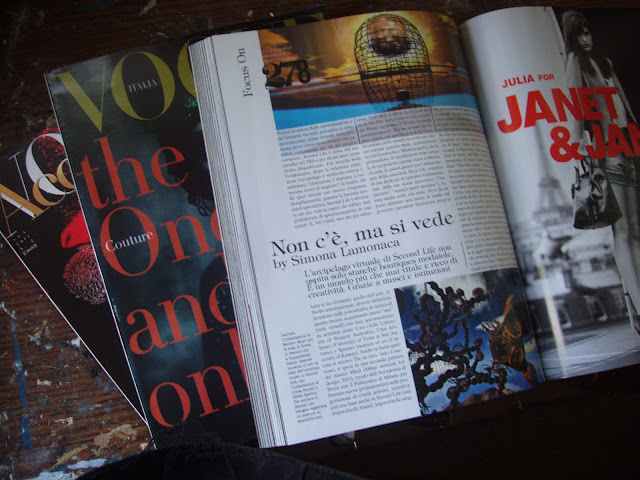 The other day Viale Linden gave me a landmark to a portal sitting in the middle of an empty region.  It would seem that Linden Labs are beta testing game tools for builders.  I asked when these tools might become available but alas no response.  This is kind of off topic, but one thing I have learned recently, is that business people never seem to respond, or sometimes answer different questions if they don't know the answer to something you have asked.  It is like somewhere along the line it has become taboo to say "I don't know the answer to your question".  I am not sure but I think people must go through dialogue training somewhere.  As an artist I just make things and as such I am not accustomed to this if it actually does exist.  I am not just talking about Linden Labs either just in general it seems to be everywhere.  It is hard to explain but here is a typical example of what I might experience.

Bryn- "Are there any apples in your bag?"
L-"Fruit may be made available"
Bryn-"hmm yes but do you have an apple in that bag?"
L-"Apples are nutritious"
Bryn-"ok well if there is an apple in that bag could you pass me one because I am hungry"
L-"We would prefer if you took the apple yourself"
Bryn-"yes but you are right beside.. and why did you say we?  It is just me and you here... ok nevermind I will come get one"
Bryn"This bag is full of Meeroos"
L"Yes"
Bryn-"Why didn't you just tell me there were no apples in it?"
L-"It's not my bag, I have not seen inside it"

Ok that last part might be inaccurate since they likely wouldn't tell you they didn't know what was inside it.

So back to the real blog post.  I went through some of the game they were testing and it was pretty fun.  I ran around with PatriaAnne Daviau and Ziki Questi for a while and it was kind of funny seeing people rush past with an angry rock creature chasing them.  So essentially when you arrive a hud appears on your screen without you having to wear it.  That would be handy for hosting events or even forcing windlights.  I guess these are some restrained life viewer traits being used.  How naughty.  The idea was to collect different coloured crystals in order to make things out of them.  I don't know if you could actually trade them in for things but it seemed that could be an eventual goal.  I collected a stink load of crystals and then had to find a big cannon to shoot.  After I shot the cannon I received 1L and a link to marketplace.  I realize it was just a beta test but I sure felt ripped off for all that work.  The only thing I can compare it to was cutting my grandmothers grass with this old rusty dull motorless lawn mower when I was 12.  I loved my Gran and would have done it for free, in fact I think I thought I was doing it for free, but when she gave me a Loonie for all that struggle it somehow put an unfavorable price on my hard work.  And a Loonie is what we call a dollar here in Canada.  She gave me one dollar.
In the end though  I think it is a great idea to put in game tools.  Not because I am itching to make a game but rather because I can imagine the tools being incorporated into experiences far beyond what they were originally intended.

Here is one portal to the game.  http://maps.secondlife.com/secondlife/Immersiva/128/128/23
It is only open to premium users right now so if you have a basic account you can't get there.  It should be opened up to all users once the testing is done. 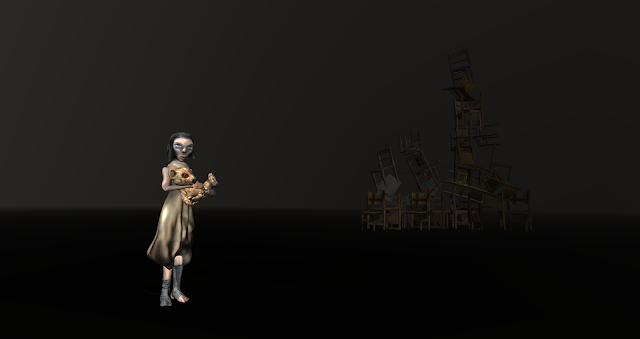 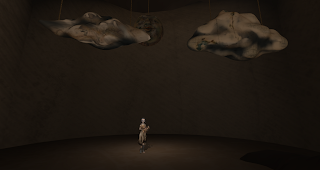 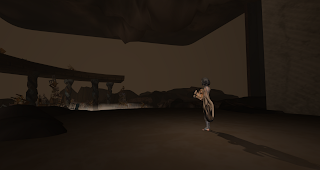 Below is the start to an oil painting for Gretchen and Teddy.  I will post the finished work when it is done but just thought i would include this now since it is all tied in.  These colours are a bit off since my tungsten lightbulb died today.  So it has been affected by my yellow lightbulbs.  By the way if you are a painter and have the problem of yellow light bulbs affecting how you see the colours on your painting.  Meaning you do a painting and bring it to the gallery only to find the colours are way different than you thought because everything was tinted a bit yellow by your lightbulbs.  Well what you do is use one normal bulb and then buy a cool bulb with a blueish tint.  The combination will create light which resembles normal daylight.  Less surprises this way.  Anyway, it will be fun to have a first life art exhibit that is influenced by my second life art.  It used to be the other way around.
I finally had the opportunity to play with mesh and this build uses a few tests.  I have actually made Gretchen and Teddy out of a combination of mesh, sculpts and prims.  The draw of using a sculpt which costs 1 prim for a simple shape seemed more economical then a mesh.  But it is also quite possible I could reduce the cost of the mesh  in prim equivalents so that it is on par with a sculpt.  Have to experiment more.  Anyway this is my first try.
Posted by Bryn Oh at 12:50 PM 5 comments: