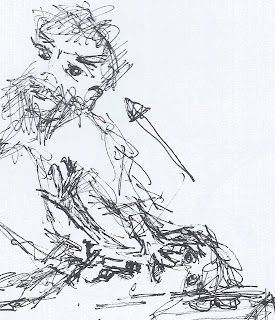 In the final scene the viewer enters into God's throne room and from there looks down upon the sacrificial scene of Abraham and Isaac as it unfolds.  Phew this part might not be too popular.  When I was doing research into various elements of the story I kept seeking out descriptions of who God was and wondered if he could somehow be translated into a human personality.  I read about the 24 elders (done by Jo Ellsmere) who sit upon thrones wearing crowns and for all eternity give praise to God by chanting "Thou are worthy, Oh Lord, to receive glory and honour and power; for thou hast created all things, and for thy pleasure they are and were created" .  They are called elders suggesting that they are humans rather than Angels seeing as Angels do not age.  God desires their presence and seemingly their eternal compliments.
Standing behind God are the four living creatures.
"and before the throne there was something like a sea of glass, like crystal; and in the center and around the throne, four living creatures full of eyes in front and behind.  The first creature was like a lion, and the second creature like a calf, and the third creature had a face like that of a man, and the fourth creature was like a flying eagle.  And the four living creatures, each one of them having six wings, are full of eyes around and within; and day and night they do not cease to say, "HOLY, HOLY, HOLY is THE LORD GOD, THE ALMIGHTY, WHO WAS AND WHO IS AND WHO IS TO COME."
In my depiction the four creatures jostle for position behind God with the Lion and Eagles struggle flaring up into a short fight between them.  God's pinky finger is hooked as though he is able to control the Angel below who stops the gun from firing.
Perhaps you are seeing a pattern here.  When we look at this story, this testing of Abraham in such a brutal fashion, we have to wonder who would this God be if we knew him as a person.  The first thought that came to me was .. well... insecure.  The desire to have two groups praising him for eternity, then to still feel the need to test Abraham.
The description in the Bible of the four creatures depicts them as having eyes all over their bodies, inside and out.   For this I imagined camera lenses forever taking pictures and watching us.  God almost seems like a celebrity with all his "yes" men surrounding him and the constant drone of snapshots clicking away.   I thought of our society where most of what we do online or out on the street is monitored.  In Toronto I am at Gladstone and Bloor and I expect that there is some form of camera capturing me once I leave the house, and for certain there is a security camera 20 seconds away at the Tim Hortons coffee shop.  Inside the house on my computer and the internet I know there are various things trying to create a profile of me for advertising purposes, such as Facebook or others.   When I log into Second Life all my local chat and instant messages are likely being recorded by Linden Lab somewhere.  So if we imagined God as the Government then the four living creatures are how it monitors us.  And let me repeat that I am not against religion, this is simply how my mind works. I observe, then ideas pop into my head.  I may find parallels in what I see or twist things about.  I think of it as a different perspective on a familiar story.  I had a whack-a-doodle cutting and pasting scripture at me for ages the other day, informing me that I was off to Hell and so on and its like... buddy.. if God exists he is not threatened by anything I say.. trust me.  He made the fucking universe! it's like imagining that a scientist cares what a bacteria in a petri dish is thinking of them.

The viewer explores the scenes and watches the interplay between stillness and movement.   The environment is designed to be minimal, with not too many busy elements, so as to allow the cast shadows of the avatar to almost become a character in itself.  In the scene below we see Abraham forcing a gun into the mouth of his son Isaac, who struggles in terror.  This scene mirrors the first one of the build where Abraham comforts his newborn son using his pinky finger as a makeshift soother as they bond father and son.  In the dramatic scene Isaac sees that his father has pressed the trigger of the gun, yet an Angel has arrived to place her finger between the hammer and the bullet.  Isaac knows his father would have killed him though, and below is the dialogue. 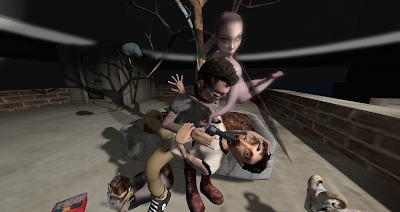 Isaac: "Father... no"
Angel of the Lord: “Abraham! Abraham!”
Abraham: “Here I am”
Angel:  “Do not lay a hand on the boy, do not do anything to him. Now I know that you fear God, because you have not withheld from me your son, your only son.”
weeping Isaac: "Father..." 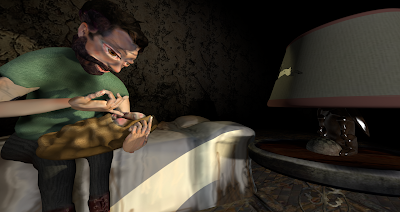 This dialogue is the same as in the Bible changed only in that I have allowed Isaac speak too.  In a way, the story to me is really about Isaac.  He is the future as all children are, and would naturally be shaped by such a traumatic event.  He is somewhat of a pawn or tool in a higher game with little thought given to the repercussions of the "test" on his psyche. 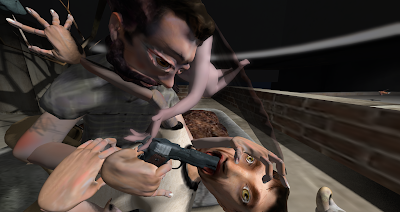 The 24 elders sit and watch in various states of boredom and the Angel herself has a carefully controlled expression of indifference.  Abraham resembles a determined yet detached machine with only Isaac showing the extreme emotion that would exist in this situation.  It feels like there is a chaotic struggle yet the environment is motionless with only the plastic shopping bag fluttering in the tree behind them.  These plastic bags caught in tree branches appear in various works of mine, and I refer to them as "City birds" as you generally only ever see them like this in cities.  Sometimes in spring you can witness trees with dozens of different coloured plastic bags fluttering away in their branches like a flock.  The feeling in this composition should reflect the horror and violence that would occur in such a struggle, it should feel like a betrayal not the romanticized and dreamy ways the story is often shown in traditional paintings and sculpture.

For those of you at the school I think the composition of the scene is fairly straight forward.  As with the previous posts you can see how the eyepath works and you can apply it to the top picture of these lower three ones above.  You can see triangulation starting from the angels head down her wing across Isaac's face then along the gun to the elbow which brings us to Abraham's face.. from there we may follow his eyes to Isaac, or continue up to the angels head to begin the cycle again.  Eventually the eye follows the angels arm down to the finger which separates the hammer from the bullet.  There are lots of directional lines really, the fingers of Isaac's grasping hand pointing up to Abraham's eyes, the walls, the tree, the lunchbox and so on.