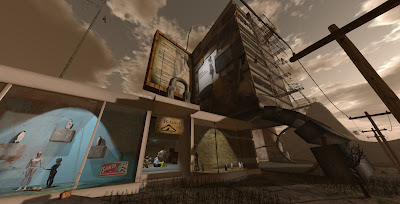 Across the street from the Subway, Rebirth store  and PodWorld is the first scene to the story for Hand.  The street has become overgrown with weeds as the city declines yet many of the things which rely on solar power still persist.  The lights in the shop windows perpetually wake and sleep each morning and night.  The advertising billboards ceaselessly rotate searching for an interested eye.  The tethered 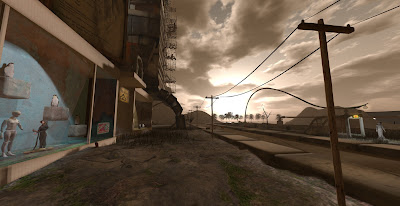 telephone poles march in ranks to the horizon, their purpose forgotten.

At Robins clothiers, against the blue background of a broken display window we see the girl from the subway.  She has placed her suitcase on the ground and has stepped past the  shards of glass to stand before a mannequin.  Here begins the story.


The young girl was known as Flit to some and Flutter to others.  Today she had discovered, on her explorations, a long sought after treasure which she now had safely packed within her suitcase to bring home.  On her way back she stopped by the mother mannequin, as she so often did.  The mannequin still stood within the broken shop window, her clothes long rotted away to the wind and 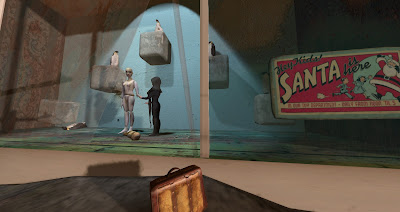 the rain.  On the ground beside the mother lay her display mannequin child, broken and forlorn.  She stood endlessly looking upon her fallen child, hand stretched out never to hold again.
Flutter watched the mother wistfully for a while, as she always did, but this time she slowly, hesitantly, approached and then gently detached the mannequins hand to hold within her own.
In Flutters imagination the hand was not severed at the wrist but rather continued up an arm to a warm smile and soft crinkled eyes.

"A mother has freckles in her eyes that match her children's" Flutter murmured.  "She would put mittens on your hands when it's cold.  And if you cry out in the night, she is always there.  Always.  That is a mother."

Flutter held the mothers hand and her precious suitcase in the other.  "Come mother it is time to go home.  Everyone will be so excited."
Email Post