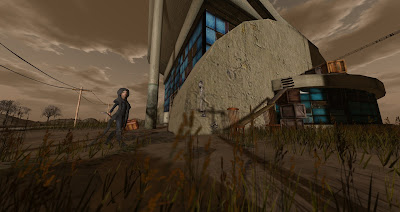 Flutter picked her way through the quiet empty city.  Past the Rebirth store and VR Podworld.  Curious Drones occasionally flew down to take her picture, thinking, with their simple AI, that they were camouflaged by their kites and dead birds.  They tried to disguise themselves by tying objects they knew were sometimes seen in the sky, to their aging metal bodies.  Behind her lay a broken cell phone, and nailed to a telephone pole was a digital Jesus.  An artist's 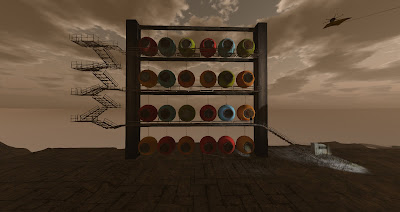 social commentary now lost and forgotten.
"Mother you must always look both ways when crossing the street," Said Flutter wisely.  "because..." and here she faltered at a loss as to why, seeing as she had never witnessed a moving car.  "Because.. well so that you know where you have come from and to see where you are going."  Flutter climbed the boxes and walked balanced across the downed TV antennae towards her home in the apartment building.  Beside her stood row upon row of pods for the dreaming class, as the working class often derogatorily referred to them in the early stages.  Everyone though, eventually, became a sleeper. 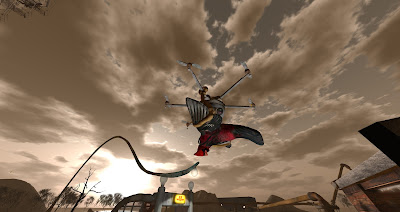 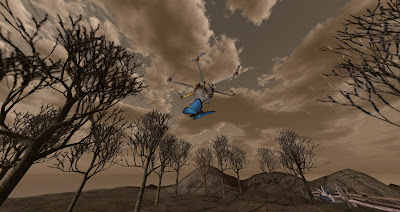 The visitor, when reaching the surface, will find themselves regularly bombarded by drones who will circle trying to get the best vantage point for a not so discreet picture.  The drones were used for surveillance in the city and were given a limited AI to take these pictures.  Their programming was to catalogue and monitor the population but to do it in such a way that people wouldn't really notice and become alarmed.  Their AI left alone to fill these directives considered camouflage as the best option.  In the story there are four different drones with camouflage.
There is a kite drone which you can see in the image above with the pod apartment building.   There was the Cardinal Drone who has attached a dead bird to itself to try to pretend it 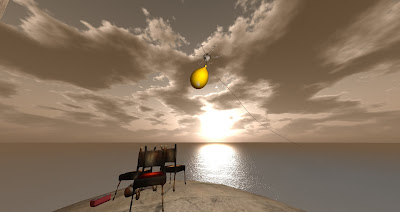 is simply a bird flying by.  The butterfly drone has found a Blue Morpho butterfly and sneaks about with it as its cover.  And finally there is the balloon drone who is attempting to appear as a balloon lost to the hand of a small child and now innocently floating about the sky.

Flutter uses the mannequin hand as a surrogate mother.  She talks to it as though talking to an adult, she works out her thoughts and ideas and imagines the hand attached to an attentive listening mother.  Flutter has come across a great deal of information about what the world 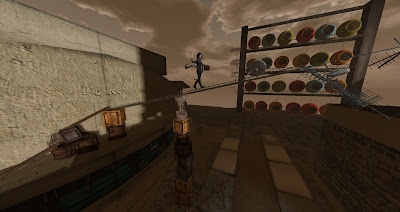 used to be like, she knows old sayings and references to many cultural things such as television, Internet and so forth.. but she has never seen many and has an abstract view what they are.  An example is her telling the mother that they must look both ways before crossing the street.  She knows the saying but doesn't really know why you would bother to do that.  There has not been a working car in her memory 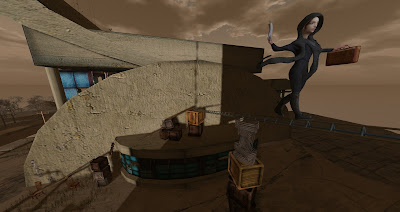 so she doesn't realize that it something a mother would tell a child for their safety.  Flutter interprets
the saying as it relates to the precious thing she has searched for and now holds in her luggage case.  She looked everywhere for this prize and when combing the city she didn't want to search the same areas twice.

The visitor, when exploring my work in general, needs to stop and observe their environment.  Those who do will discover a series of boards and boxes leading up to a broken antennae spanning two buildings.  This leads to the next stage in the story which takes place in the main apartment building.  When crossing the antennae the viewer will see in the background "Ocean view" a Pod park or pod living space.  It doesn't actually have a view of the ocean as all the pods face inward but 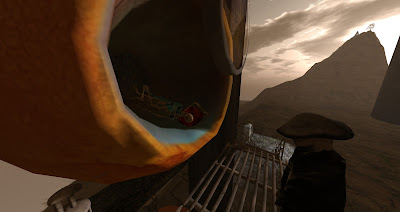 that is not important as all the tenants are comfortably within their VR world unaware of the false advertising.  As I mentioned before the residents of the world now live, love and work within a virtual space.  They no longer need the expense of renting or owning a spacious house or apartment, they have food canisters that last years so they need not buy fridges, freezers, stoves nor entertainment 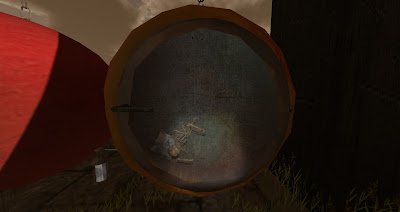 such as TVs.  They have simplified their lives as all good self help books would suggest you do.

If the visitor walks up the steps to peer inside the pods they may find a few living sleepers but the majority and now filled with those who starved when their food canisters became depleted.  Their skeletal remains still in poses of relaxed comfort often with blankets and pillows.  Much how we disparage the "desk job" or "grunt" in our work environments the early adopters who worked in the virtual space were looked down upon by the working class and dubbed the "Dreaming class", but as time went by all eventually became sleepers.
Email Post