A few days ago Alex Colville, a great Canadian artist, passed away.  You likely will not have heard of him if you live outside of Canada, and you most certainly wont have if you are from Canada.  Ok that is not true but we are pretty terrible about promoting our own talents even to ourselves.
So polite and unassuming to the extent that on Mr Colvilles website it simply states "Alex Colville died peacefully at home on July 16th, 2013."  I think that is why I wanted to do a blog post, to simply not just let him fade away so quickly. 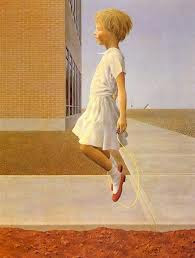 I don't normally speak about my real life here too much but I would like to, briefly, to help illustrate why Mr Colville was important to me.   My father was orphaned at 5 years old and one way it shaped him growing up was to instill a strong desire for stability in his life, and ours.  You see he had no stability, nor a loving family so, while he was vaguely aware I was artistic, there really was no option for me to be an artist after I graduated from high school.   Being an artist is not a reliable profession.  There is no salary nor security.   So, having no idea what I wanted to do with my life, I went to university for Psychology.  I found it to be very interesting but my friends always commented on how I was constantly holed up in my unfinished basement apartment, with all the spiders and cobwebs, painting away.  I think I produced 15 paintings while studying at university and one day I determined that I was going to apply to be a student at Canada's top art school, The Ontario College of Art and Design.  I decided that, should I be accepted, I would drop out of university and go there.  I wont drag this out, but I was accepted after a portfolio interview and did precisely that.   My father literally had a heart attack shortly thereafter, though I really don't think there was any connection.
The interesting thing about OCAD was that it is made up of all the talented kids from schools across Canada.  So you probably had one of the types I am sure, that kid in the school who won all the art competitions and did artwork for various plays and what not.  Well OCAD is full of all those kids who were used to being the best artist in their school, region or province.  But suddenly they arrive at a school where their best is now just mediocre.    You stay up all night working on a project that you are sure will be declared a modern masterpiece.  You carry the painting on the subway fully prepared to give autographs should anyone ask, which they surprisingly don't.  You arrive to your class for critique only to realize that all the artworks around you are far superior, and that your painting appears to be on par with something done by an angry monkey throwing feces at his prison wall. 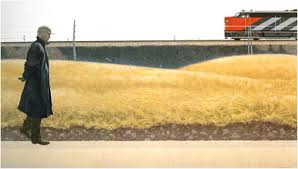 At the time I was there the professors were practicing artists, which is not the case anymore.  Now they often just have a masters degree and have never actually had to survive as an artist for any period of time.  The previous professors, in some cases, were very blunt to the students.  Asking publicly how on earth a student was accepted to the school for example.   I recall my friend Rory being told he should drop out and become a labourer as he really had no talent.  This being said while we drew cadavers in pencil and conte at the morgue from the University of Toronto, all amidst the smell of formaldehyde, with a audience of pickled and diced body parts looking on.

A stressful time no doubt, and so we were given a project whereby we were to study and write about an artist of our choosing.  I picked Alex Colville.  I wanted to step forward and prove that I belonged there.

I delved into the life of Alex Colville and came up with some ideas in regards to what, I thought, shaped his work.  I wrote a great big essay which I have spent the last hour looking for in my basement, it is elusive so I will summarize it from memory. 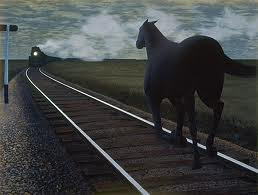 Mr Colville was born in 1920 and moved from Toronto to Nova Scotia on the east coast.  Shortly after arriving at around 9 years old he caught pneumonia and nearly died.  His recovery was very slow, a year I seem to recall, and during that time he became introverted due to his relatively solitary life of sitting in bed drawing or reading.  I wrote that this was the first instance of him becoming aware of life and death, and how instantaneously things can change.  I think he really dwelled on mortality at this time.  Later he went to art school and after graduating in 1942 enlisted in the army to become a war artist.  Things went poorly and he was sent back from training.   Thinking his ambition to be a war artist was over he began living his life and got married.  Suddenly his settled life was uprooted as he was sent to Europe for D-day in 1944.   He painted the war through Holland and Germany with his most affecting experience being sent to Belsen death camp a few days after it had been liberated.  I think 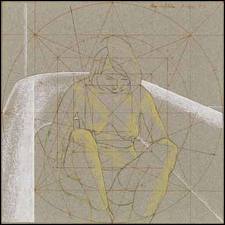 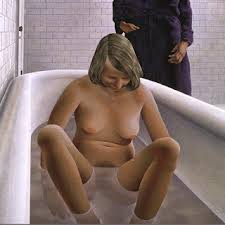 that all these experiences can be seen in many of Colvilles work in that some portray scenes of a moment in time where an outcome is unkown but a collision course is set.  A split second between life and death, stability and upheaval.  I really wish I could find the essay so I could have reprinted it here.  Anyway, I had always wanted to send my paper to Mr Colville to find out if he thought it was all garbage.  I never did though and sadly its too late now.

colleen3k said…
Thank you for enlightening me about this brilliant artist! Your posts are always eye-opening in that I learn so much from you. Thank you again...HUGS...Colleen Crary (Anya Ibor in SL) ;-)
July 23, 2013 at 3:54 PM