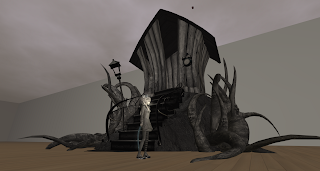 If you are a small prim builder and wish to showcase your work, then you might like to exhibit with the UWA.  Your work must be no larger than 100 prims which  can be tricky, but it's a great place to show smaller builds and a fantastic place to find emerging artists.  When I was there last I found the work of Rebeca Bashly shown in the picture to the right.  Its the kind of work where you can really imagine what a full sim build might look like if she were given space.  And that is the strength of the UWA.  Rebeca isn't actually an emerging artist as she has been in SL for four years or so, but I mean that the UWA brings together artists who may reside outside of the creators you are familiar with.
Jayjay Zinfanwe has been running this event for a few years now originally with Quadrapop Lane, who did a great job, and then more recently with Freewee Ling who is also an integral part of the events success.  What is also nice about the UWA is they give away over $1, 000, 000 linden in prizes to prim artists and $500, 000 to machinima artists over the course of a year.  Below is a list of groups who bestow awards, and as you can see you would likely find an audience there who might like your particular work of art.  What is kind of nice is that in many cases there is no consensus winner.  In the last month almost every group that gave out an award picked a different winner.  That suggests that with each month it is very competitive in the skill level of the exhibiting artists.

My favorite build from this month was (Three little turns and it goes away) by  Josiane Sorciere.  I was smiling as the ballerina turned inside her jar, but I was sold when she tipped it over and jumped to her death.  The short video above shows how it worked from a few different angles.  It is a painstaking process to animate in this way and she did an admirable job doing so in a convincing manner.  Something animated poorly really jumps out to the viewer, so the fact that you accept the animation as it is plays illustrates that it was done with enough skill to not break our immersion within the little narrative.  SL is not very good for animating in this manner. It can be jerky etc.   So knowing its limitations is important when choosing a subject.  When we see the ballerina dance we know it is mechanical so we allow it to have a certain degree of unrealistic movements.  If on the other hand the graceful smooth running of a horse were to be attempted, then the end result would likely fail as it would not have the measure of grace that we would be accustomed to seeing.  So Josiane created a narrative, animated it skillfully and chose a subject to animate that worked well within the limitations of zfire or puppeteer.  Or whichever animation tool was used.  Also in its own way it is a creation which capitalizes on the unique abilities of SL over RL.  I don't know if I would say it is not possible to make in real life, but it would certainly be very difficult to do and exceedingly expensive.  I always enjoy a build that allows the viewer to see something that they wouldn't come across in RL.

Anonymous said…
Thanks for the mention Bryn! I am really happy my build caught your attention:)

jayjayzifanwe said…
beautiful machinima of josiane's work too
April 9, 2011 at 9:37 AM

jayjayzifanwe said…
linked it on the blog
http://uwainsl.blogspot.com/2011/04/bryn-oh-university-of-western-australia.html
April 9, 2011 at 9:38 AM

Glyph Graves said…
thats a nice piece of work both as a lovely work of art and very well technically executed .. I like it too, thanks for pointing it out Bryn.
April 12, 2011 at 12:32 PM

Runescape Gold said…
Weapons alter from daggers to barrows guns. Daggers are generally quickly, but are not which powerful Runescape Gold. They could be one-handed, and may hold the effect regarding harming. Quick swords are 1 step-above daggers. They're speedily, but go low destruction. Small swords tend to be 1 passed, but usually usually are not incredibly productive inside battle. Scimitars are generally one-handed, and so are speedily. Scimitars offer a good level of injury in comparison to the quick swords as well as extended swords Runescape Gold for Sale. Maces are certainly one given tools, however are slower.
January 11, 2012 at 2:58 AM