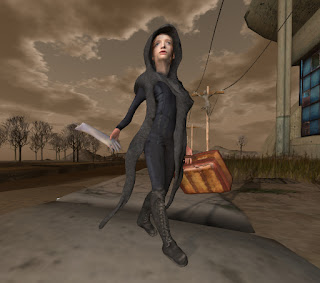 So about the grant.  It is substantial and will allow me to further embrace working with the Oculus and other technologies to create immersive spaces.  One element of the grant is to film the work "Hand" and build it in Sansar (will also go in Second life).  The first obstacle?  Sansar doesn't support the space navigator mouse which is used for filming.  From what I understand it is not going to be supported anytime soon either.  There is a feature request that I submitted a while ago if anyone wishes to encourage them to work on it https://help.sansar.com/hc/en-us/community/posts/115018282103-Space-navigator-3D-mouse-support
I understand that Sansar has lots of things to work on and they are often coming up with new features.. just a few weeks ago they announced the ability to sit in chairs.  They are doing great but my humble suggestion would be to focus on things which will help promote Sansar.  Machinima is a great promoter and Sansar might be  an ideal place to make machinima.  A news article or blog post is great too.. but they are static and show the space in 2d snapshots.  Machinima is the best was to show people the virtual space other than them actually going there to try it.  The thing is, if I can't film in Sansar for my grant,  then I will have to try High Fidelity (a competitor) or Second Life.  See I told you artists gripe about things.  Ok I will confess why I am griping today.  I am fostering a black Labrador 8 month old puppy from the Shelter.  It is exhausting!  She has leg issues so I have been keeping her at home for the last month rather than her staying in the rather cold and lonely animal shelter.  She needs people.  Once she is healthy someone will adopt her, though sadly I can't though I would dearly love to.  But it is exhausting.  I spend most of my time trying to get my gloves back after she has snuck them out of my pocket or rooting things out of her mouth.  That's a gooey job.  The other day on a walk she ate a cigarette butt.  Its like .. why? that must have tasted like stink!  Also the other day she suddenly launched herself at me while I was reading and shoved her entire tongue into my mouth.  Possibly a bit of her nose too.  She is lovely and  sweet really, but I also have had to put on one of those lamp shade things around her heads so she can't bother her feet, and then she turns into a wrecking ball.  She hasn't figured out her turning radius yet so she is constantly knocking over everything... and worst thing is she wants to go for a walk at 5am every day!.. and will  bark.  So yes I am griping but its justified! justified I say!  I am sleep deprived.  Anyway, to sum up yay! grant and thank you OAC, spacenavigator please and dog gah!.
Email Post