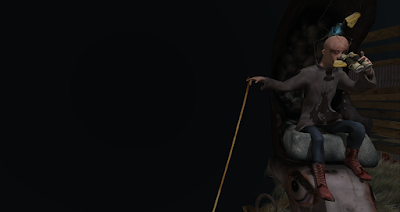 A few months ago Anejka Cerise commissioned me to build something for the Sparta region.
A build with a poem and machinima for their sim.  I looked through my catalogue of characters and timelines to decide which to write about and add more depth to.  The last few were Lady Carmagnolle from the abandoned amusement park in the Rabbicorn story,  26 tines which was a laboratory for machines and then Tilt-a-Whirl which showed Juniper and Flutter together.  The character I chose to create a work around is one who I wrote a history for, but had not really spent a lot of time on in the past.  In my mind I know his connections to everything over the last ten years or so, but I know that it is not obvious to those who follow the story.  The main character for Catching feathers is the Scientist who built the Rabbicorn and various other machines in my stories.  He is just known as "the scientist" in my mind and I never do give him a proper name.  In fact he is in the much larger story I am writing and even there i skirt around his name.   He works for the government creating functional robots for everything from industry to the military.
In the Rabbicorn story he built, secretly on the side, a machine that could love... and that machine was the Rabbicorn.  His "love" upgrade was later purchased by Kumiko's parents for Mr Zippers in the Singularity of Kumiko.  After creating the Rabbicorn he determined that he would have to hide it or give it away as he knew that once it was discovered, and due to its AI advancement the Rabbicorn would be confiscated and taken apart to study, so he gave the Rabbicorn to a stranger who then gifted it to his son on his birthday.  He is also the lead scientist who has gone home for the night and left the two characters alone to meet in 26 tines.  All the machines in the displays in 26 tines are created by this same man whose life revolves around building for the government which leaves him feeling empty and unfulfilled.  In each of these connections his background was not really displayed so in this poem machinima I have talked about about his life.  Essentially he is an accomplished man with few social graces.  He is not exciting or witty nor adventurous and well traveled.  He is a simple man who goes through life watching others seem to fit in perfectly while he is hardly even seen on the sidelines.  He wants someone to share his life with and in the end his abilities allow him to build rather than meet someone to love.  He wants to create his own "angel" from the dance floor and goes so far as to build her wings.  To finish these wings he must lure and catch little birds who he must then pluck resulting in their death.
It is the dichotomy of taking life to create one for himself.. or rather a half life.  He is not meant to be a perfect character who we sympathize with completely, but one who does some good things and some bad.. as do we all.  Is he just lonely or instead creepy?  many of my characters are built this way to encourage discussion.  It asks the questions such as can we build our perfect partner or does a perfect partner require the intangibles and annoying bits too.  It is wrong to create a girl such as he has decided to do.. to give up essentially or is it merely human progression.  A type of evolution of the mind where we leave the body behind in a similar way the hermit crab discards its shell.

Catching feathers will open on Sparta empire region Monday 4th June 2018, 12.30 pm slt /21hrs central Europe  With special thanks to Chris Komashko for the sound design and music in the machinima.