Last days of Singularity of Kumiko

Now that I have completed the machinima for The Singularity of Kumiko it is time to take it down and begin work on something new.  For those of you interested in stats and juxtaposing a real life gallery exhibit vs a virtual world one then here are a few things related to this one.  In my first life a gallery exhibit of my paintings would have an opening night reception of approximately 300 people and then would run a month with visitors each day dropping to around 30-40 at the start of the month to probably 20 by the end.  I am going to be generous and say perhaps 1500 people will visit a first life gallery exhibit of my paintings over the course of a month.  I would get one or possible two such exhibits a year and the majority of people who are exposed to my work this way are local to Toronto. 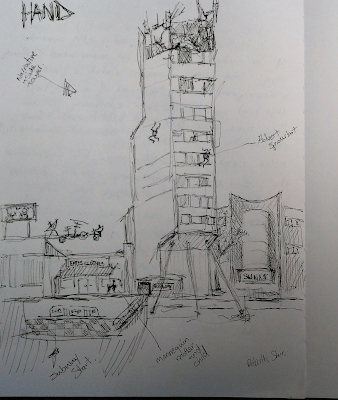 In contrast the Singularity of Kumiko has exhibited twice and combined has hosted just under 80,000 visitors.  These visitors are from around the world as opposed to local.  Second Life has often
been described as a "walled garden" with limited exposure for those within... I would disagree.

I am thinking I will remove the build on Saturday the 6th and begin the process of building something new which should take at least a few months.  I will keep Immersiva open during this time for those who like to watch things evolve and grow.

The new work is tentatively called "Hand" right now though that might change.  To the right is a bit of brainstorming from my sketchbook.
Email Post