I had said that there was some good news coming up and there is!  Cannes winning director Peter Greenaway has very generously offered to pay six months of tier for Immersiva.  I have tried to think of a way to express just how much this means to me but I lack the words.  It was just very unexpected and rewarding to know that he appreciates my work and would take steps to help.
Numerous people have asked how they could help bring Immersiva back and up until now I have really just hoped Linden Labs would come up with something.  They didn't and I can't honestly blame them as it would have set a precident that could well have come back to haunt them.  I don't deserve a free sim more than any other artist using this virtual world as a medium, but having said that I would have also loved to see them break their own rules and set that new pecident... then deal with it.  Change the whole way they do business.  It was worth a try even if the chances of success were low.
I have spoken to a variety of people and after some thought have decided to try a crowd funder to see what happens.  If you click the banner below it will take you there or you can click here. 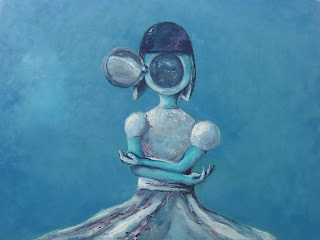 It will run for 60 days and one unique part of this website is that it allows for people who donate to recieve "perks".  You can see all the perks on the right side of the page if you go there.  But for example with some donations I will do original pen and ink drawings or oil paintings as perks.  But let me stress that you should only donate if you can afford to do so.  I don't want anyone to put themselves in a bad position over this. 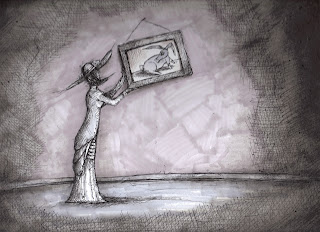 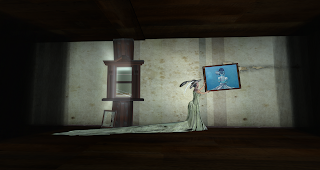 The money raised will be used to bring back Immersiva for a year and a half which would let me fulfill obligations for my Government grant.  I will also be able to work on a new project called "Virginia Alone" which you can read about in an interview I did for a newish SL magazine called Rez.   They have a website here but their main focus is in creating prim in world magazines.  The interview questions were great and in the first question I explain Virginia Alone.  I will send it out again in my in world group Immersiva or you can just ask Jami Mills for a copy.  It is actually a two part interview that continues next month.

The first thing that would happen would be rebuilding Standby which is the third and final part to the Rabbicorn story then I would film it.  Essentially I will just keep doing what I have been for the last four years or so.  I guess it is closer to five years now but yes I would continue creating Immersive environments and narratives and try to see if Bryn can continue to make her mark both inside our virtual world and outside amongst the flesh and blood ones.
I would like to say that the crowd funder has only been up one day so far and it is just wonderful to see the support already.  I really do appreciate all the kind words and encouragement.
Email Post

Deoridhe said…
I wish I could give more, and I might be able to next paycheck! I hope it ends up working out for you; I adore Immersiva so much and miss being able to go there.
January 18, 2012 at 4:25 PM

Clair LaVaye said…
Bryn, I'm glad you set up this fundraiser. It gave me a way to give something back for the pleasure I receive from your art. I am very pleased to see that, with Peter's support, soon we'll see the return of Immersiva. I hope that the Lindens will someday see the wisdom of holding on to the artists they have attracted with what was once so unique. As new worlds develop, their lack of support for the artist community of Second Life could lead to a talent drain that could reduce SL to a world of poseballs and clothing stores. Every world requires support for the public good and land for art is a completely worthy cause. Thank you for giving so much of your time and talent to the fragile digital world. Regards, Clair LaVaye (Clairwil Oh in OS Grid and Second Life)
January 18, 2012 at 7:37 PM

Bryn Oh said…
Thank you Deoridhe it is very kind of you to have donated but please no more you don't need to. Thank you clairwil Immersiva will be back but I won't get the donations until the 60 days runs out. But yes Immersiva is back and then some!
January 19, 2012 at 10:51 AM

Corcosman said…
This is good news indeed. I hope it all works out for you, Bryn. Who knows, there may even be some Lab board members willing to kick in a dollar or two. Heh.
January 19, 2012 at 11:45 AM