"Juniper! Juniper!"  Flutter whispered excitedly to the figure on the bed who was draped under some blankets.  "I have the final piece to the house with me!"  Flutter watched the head and shoulders under the blanket turn to her voice like some unresolved clay.
"It is not safe out there Flutter, come under with me."  Flutter climbed under the blanket with Juniper and held her close as the opened the suitcase to show her.  "So beautiful" said Juniper. "What do you think will happen?"
Flutter thought for a moment then replied excitedly while bouncing "I am not sure but I go first tonight!"  The blanket rose a bit above the bed as she bounced and Flutter felt a burst of cold air invade the warm blanket world.   "Oh lucky" said Juniper with just a hint of envy.  "What do Dick and Jane say will happen?"
"They don't so we will have to make it up."  Flutter put the prize back into her suitcase and gave Juniper a hug, before sliding out from the half light of Junipers blanket world. 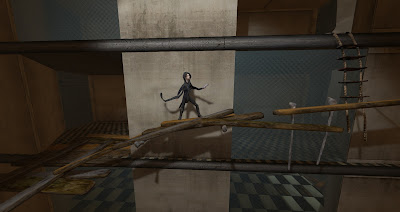 The visitor has a few precarious places to navigate before getting to this part of the story.  The first
part involves some old wooden planks assembled to the outside of the apartment building with a ladder to the next floor.   We can see Flutter walking this portion pretending the hand mother gives her help in navigating the rickety planks.  Flutter has naturally done this part hundreds of times and needs no help
being the agile girl she is, but what we need and what we want are two different things sometimes. A bit later we cross some long planks spanning a chasm to an old Slinks building, and then we return to another broken window in the apartment building.
So I am an evil person.  It is true.  These parts are unforgiving and should the visitor fall they must start again unless they have come with a friend who can teleport them back up.  One of my philosophies when creating an immersive environment is that the visitor must feel a sense of engagement to the extent that they fear for the themselves to some degree.  In other stories people could actually "die" in my artwork and would be sent out of the story.  While this one isn't that ruthless, it can be stressful to walk the wooden planks knowing that a fall would still be
somewhat horrible in its own way.  A few people told me they were sweating as they slowly walked these areas and to me that is exactly the kind of engagement and investment I would like in the story.  I really feel that working hard to get something, in this case the story itself, leaves a much stronger impression than being handed something.
Along the way we find a few more sleepers.  One has long since run out of food in his canister and now sleeps in bones.  On a comfy rug on the floor beside them lays
a dependent Powerpet whose food ended along with their owners and they too lay waiting as bones and computer parts.   In another room is the Obese man.  For an artist it is fairly easy to take a beautiful subject and make a lovely artwork that pleases people.  What some artists crave is to test themselves with an ugly image and attempt to make it beautiful in its own way.  I think perhaps one of the most famous of these attempts was a reaction by Mary Cassatt to a comment by Degas where he said "What do women know about style?"  they were great friends and he was a rather caustic personality.  Mary took an unconventional
subject and through her skill as a painter made it beautiful.  Degas later bought it.  I was thinking of this because yesterday someone sent me a comment on a flickr picture taken of the Obese man which said "Les trucs de Bryn me mettent toujours dans un sacré malaise. je trouve ça limite malsain.... my opinion!".  The translation from French to English being something like "Bryn's stuff always puts me in a state of discomfort. I find it unhealthy limit .... my opinion"  I realize this comment was meant to be a negative attack, but I couldn't help but be pleased.  I don't think an artists job is to try to make people comfortable.  The story behind Hand is not meant to be comfortable but to have social commentary on a range of topics.

We move along and see a candle with an ant trapped in amber.  Clicking this brings us to the story of Elliot Amber.  I am going to talk about Junipers comment
"What do Dick and Jane say will happen?" and Flutters reply "They don't so we will have to make it up." at a later post.  It is an exchange that
makes more sense at the end of the story and, as with most of my work, requires the reader to revisit earlier pages to see connections.

Juniper is a character seen in previous works such as Imogen and the Pigeons and the Singularity of Kumiko.  Each character that I create is a representation of a part of me.  They are not all of me, but a sliver, or a piece.  Juniper has a poem which defines her which you can see in the machinima below.  She hides from the world as people do in many forms around the world, but also, as is my focus, in the virtual space.  This is not meant to be critical of those who hide, the beautifully broken.   I have never been one to blindly swallow the comments of those who suggest the virtual space creates this.  The simplistic mind uses a broad brush to define others.  Juniper may be seen as being broken, but to me she possesses heightened empathy and an a sensitivity lacking in others.  She doesn't want to Twerk nor does she need to be seen by everyone.  She sees and craves the root or heart of a maelstrom which spins and obstructs, she sees past the world and its distractions to the one simple thing she desires most.  To hold hands under the blanket with someone she loves.