Flutter opened the door to a room finding an Advert Spider clinging to the outside of the apartment building.  When it saw her it began projecting an advertisement upon the designated wall inside the room.  "Oh hello spider" said Flutter in a familiar sort of way.  "Greetings Ms Flutter, may I say, with all due respect, that you are looking a bit tired today?"
"I think, perhaps, you need a bit more "You" time Ms Flutter.  Are your children brimming with curiosity and asking endless questions?  You could always enroll them in Retelevise, a 16 week program which will imprint your child onto a device or media such television, social media or general media.  This will return the "You" time to your day so you may relax in a VR and drink a coffee.  And are those wrinkles around...."  Here Flutter interrupted the advert spider.  It was important not to let them get on too much of a roll.  You could make friends with them, in a limited sort of way, but today she was too excited and wanted to get home.  "Thank you spider, but you know very well that I have no children.  I don't really even know what you are talking about"  The Advert Spider, long bereft of adults to advertise to, still attempted to fulfill its programming.  "My apologies Flutter, have a wonderful day and I will speak to you soon when I have even more exciting opportunities for you!"
"By the way Ms Flutter," Spiderbot continued "do you have spider points?! you can redeem them for...."  But Flutter had already left the room.

A theme that regularly runs through my work over the last ten years or so has been the aware
machine.  A man made machine that recognizes and interacts with the humans around it.  Some are more advanced than others such as the Rabbicorn and Mr Zippers who could love or the Daughter of Gears who was the human mind of a young girl inside a machine.  Others like the Veralynnbot fulfill their programming yet still possess 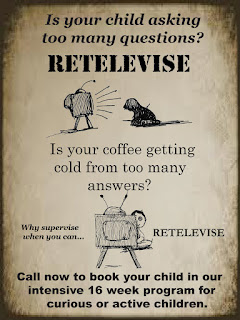 an attachment to humanity.  The Spiderbots in this part of the story are Government sanctioned advertising robots that are permitted to walk apartment buildings and project advertising onto designated walls.  As it says on a plaque attached to their back "It is a serious offense to obstruct or disable the HomeAdvertiser".  At this stage in their society advertising bombarded the population in most forms similar to how we are, yet they found that too many were not reading the passive advertising so it was permitted to allow a more "engaging" variety... the Spiderbot.
Flutter knows and spends time with all the Spiderbots as well Veralynnbot and others.  Had she not been in a hurry to get home she might have chatted with the bot for a while in a limited way.  The Spiderbot can have a conversation but it must try to advertise within a certain amount of time.  It may even try to interact with the Veralynnbot or the sleepers in their pods.    The Spiderbots have been roaming the city since its collapse trying to promote the paid advertising of its obsolete society.
In this work, as with others of the past, advertising can be found in various spots of the story.  I

use advertising as a means to help define and elaborate on the society within my stories rather than spend time in the actual narrative describing it.  It helps fill in parts to the greater whole without having to unnaturally fit too much of that type of description into the text of the narrative.  The visitor to my story can shape a view of the society on their own.  An important thing for me when creating an artwork is to not simply force the viewer into a passive state where I tell them a story and they simply listen such as in most other mediums.  The viewer uses their own creativity and explores in any way they like as an active participant.  They interact with the work rather than are told what to think and the culture and society they come from often helps shape their interpretation.  Hand has had about 15,000 visitors so far, and all from different parts of the world.  What I have discovered with this story and many others is that someone from Japan, for example, sees different things in the narrative than someone from Germany, the middle east, Africa or a tiny hamlet in Sweden.  It is a shared experience which, in some cases, has the person beside you interpreting it in a very different way than you are.