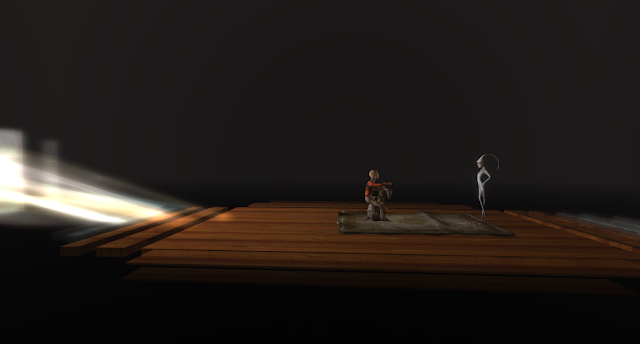 "What are you?"
the boy said to her
the Rabbicorn thought
then replied "I'm not sure"

So he grabbed her horn
and climbed on her back
pointed at his sister
and yelled "ATTACK!" 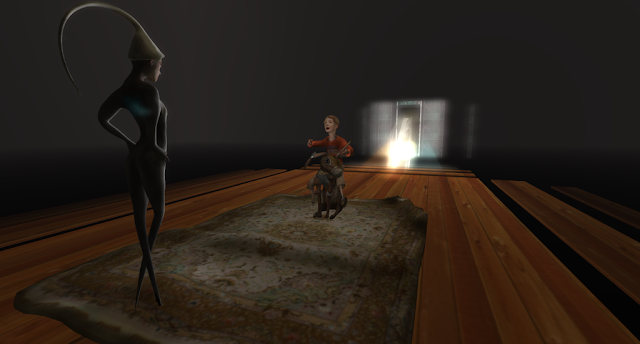 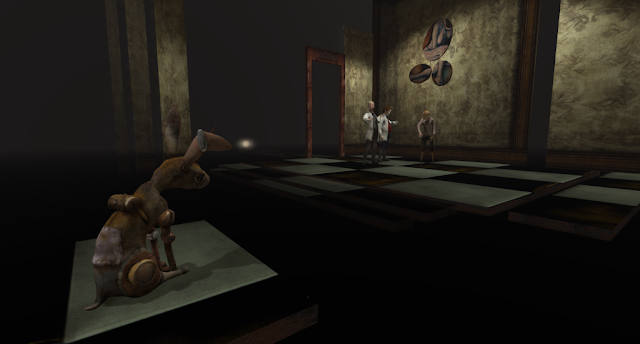 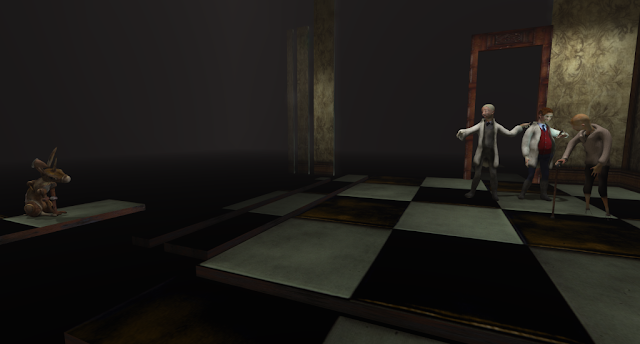 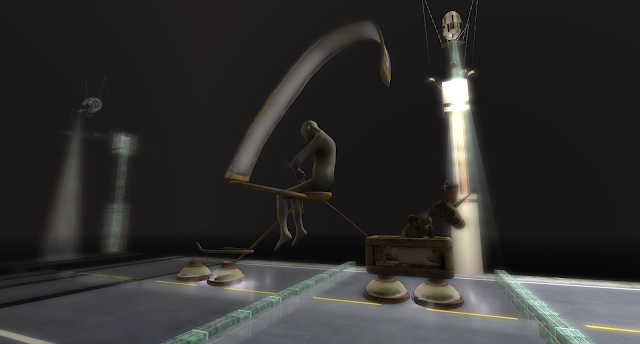 The next scene is of the Rabbicorn in a cart being driven home from the laboratory.  After creating the Rabbicorn and seeing its capacity to love actually succeeding as a program she felt that perhaps she had created a type of life.  Where we feel emotions from thoughts that trigger chemicals that then trigger say a smile for pleasure, or a fast heartbeat for fear, the Rabbicorn has her body triggered by similar emotions.  It is all zeroes and ones but the scientist questions what constitutes life.   So this is a bit strange but, when I created the Rabbicorn I imagined the whimsical things from which she was built and in my mind I imagined her heart to be connected to a music box on her back.  The music box reacting to the various emotions that were now a part of her.  When a strong emotion is triggered in the Rabbicorn then the music box will begin to turn and the spokes were retractable to change the tune.  In the scene two it is activated by separation from the scientist who created her. 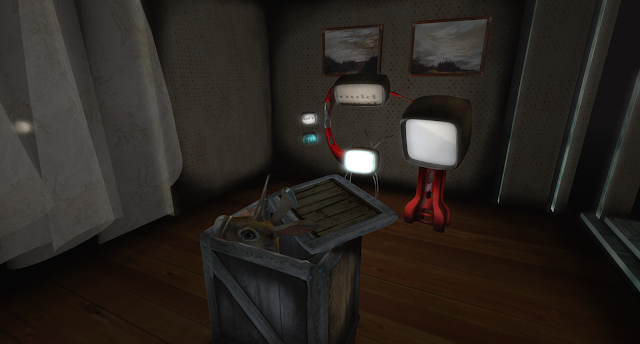 Scene three shows the Rabbicorn from a wooden box in the living room peeking out and waiting under a grid of computer screens.   This world, much like our own, is obsessed with multiple triggers for ones attention and the screens almost seem to look upon the Rabbicorn with concern as she may interfere with their dominance over the families attention.  The morning brings down a young boy who excitedly opens his birthday present to find the Rabbicorn.  The Rabbicorn's music box heart is triggered again by his arrival and she imprints upon him.

Eyes of cerulean
looked down on her
and again the Rabbicorn's
heart did whir
Posted by Bryn Oh at 3:47 PM No comments:

The third and final part of the Standby trilogy is now open on Immersiva.  All three parts are there which is a minor miracle.  Originally when the stories were created in prims they each were close to 20,000 prims for a grand total of around 60k.  Far more than a sim can hold.  But yay for mesh which has allowed me to reduce the footprint down to 19683.. which lets all three be on at once.  So this post might be long and will explain the second part of the story called the Rabbicorn.  You can read about the first part of the story called the Daughter of Gears here http://brynoh.blogspot.com/2019/03/part-one-daughter-of-gears.html 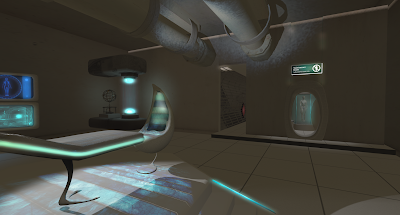 My philosophy when creating virtual spaces is to design the narrative so that the viewer will have environments with changes in scale or lighting etc.  The first part to the Rabbicorn story begins with the viewer opening a door to a corridor of glowing crystal rocks.  Projector lighting casts their reflections over the body of the viewer until they come up to the surface of the grey sky and for some a familiar building.  It is the shed where the science lab is hidden below.  This is a structure from 26 tines http://brynoh.blogspot.com/2017/12/26-tines.html     which tells the story of a maintenance robot and a little robot boy in a jar who come together at night when everyone is gone home, to connect and feel comfort through a cable.  The cable has 26 tines or spokes with which to plug into the other.   I have mentioned before that all my stories are in the same world and over the last 13 years or so I will crossover characters to show how they relate to each other.  One of the scientists from the 26 tines story is also the creator of the Rabbicorn.   She created the Rabbicorn  as a side project with the intention of trying to instill "Love" within a machine, a deviation from the war robots she builds for the government.  She succeeds with the Rabbicorn and eventually it appears in other things such as the powerpet Mr Zippers from the Singularity of Kumiko, who got the love upgrade.  Anyway I better not fall down these rabbit holes of explanations.  The science lab is again quiet with the maintenance robot still at her station and upon the work bench sits a peculiar machine.  It is called the Rabbicorn.  A mix of a rabbit and unicorn.  Spinning slowly beside it rests her heart which has not yet been installed.  Looking inside the heart will show things like a wee poem and a bird wrapped up in fishing wire which represents my father who passed away from ALS a few years ago.

On the wall is the first poem


Ok a bit more of the rabbit hole.  This isn't important to know but the scientist from Catching Feathers machinima also works at the same place.  I will include that machinima too.


Ok I can't sum up the entire story in one post or it will be massive so I will do a series.