This machinima records part of a talk I had with Virginia in her nursing home.  In it she describes a few of her recent visions while at the end she mentions her "left".  I have talked to her many times about her right side / left side battle with herself, but I realize that it probably makes no sense whatsoever just by listening to Virginia in these tapes.   So I will attempt to explain it a bit here.
Virginia has always had a struggle between two sides of her body.  Both vying for dominance.  She is naturally right handed and performs many of her daily tasks as any right handed person would do.  At one point her left side began to take control away from her right side.  So rather than using her right hand to pick up her coffee cup as she is accustomed to doing, her left hand will take it.  It likely doesn't sounds strange unless you decide to pay attention to how your own body instinctively reacts to routine events.  And then try to reverse it.  I am sure it is a very odd experience. 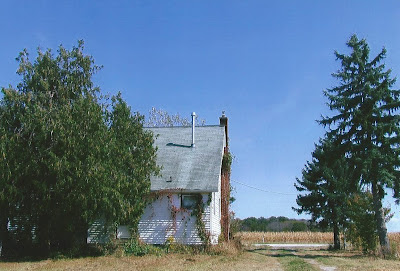 Often Virginia would connect the actions of the left side of her body with causing real world consequences.  So for example.  If her left shoe was too tight or maybe her hair clip, then, as she notices the tightness, her phone rings.  She finds the phone only to discover nobody responds.  The phone rings again and it is the same situation.  She loosens her shoe and the phone stops ringing.        Now for you or I who live in a very calm rational world we will scoff and say "well that is just coincidence".  My goal in this project was not to rationalize or champion Virginias world, as I am not living in nor a party to it.  I am cataloging her perspective and helping Virginia to explain what she goes through.  In her world not only are her interpretations reasonable, but they also help to make sense of her situation thus allowing her to get through her days.  Remember that she is completely alone with these experiences.  Virginia hears voices, sees visions and has found herself, mouth open, speaking words she has no intention of saying.  To Virginia there is a battle going on for control of her mind and body.  One side feels foreign and disengaged while the other side is her.  If she can function on a daily basis using elements of her real self as opposed to what she considers the left side, then her world follows a more calm and rational course.
Once the left side comes forward to interfere then there are often small but noticeable side effects that Virginia has recorded for many many years.  Here are a few other possible side effects of using her left.  She opens the front door to feed the feral cats and when using her right hand they are all well behaved and there are no problems.  If she discovers her left hand takes the scoop of cat food then perhaps the cats bite and scratch her or run into her house meowing for days.  If her left hand touches the radio then she suddenly can't get any stations for a while.. just static, or suppose she turns on the tap with her left hand for a drink of water and at that precise moment a car pulls into her driveway and a man comes out and begins to bang on her front door terrifying her.  Our reality is well behaved children lined up quietly to go into class where hers is recess time and chaos.
Posted by Bryn Oh at 10:13 AM 6 comments:

I began working on Virginia Alone perhaps a year ago, and within this period Virginia was taken out of her home which you can find on Immersiva, and put into a nursing home for the aged by her estranged daughter who had reconnected with her.   Virginia was not terribly happy about going to live in a nursing home and felt betrayed, yet in the end it was for the best and she now understands that.  She  has people cook for her as well as doctors and nurses etc. 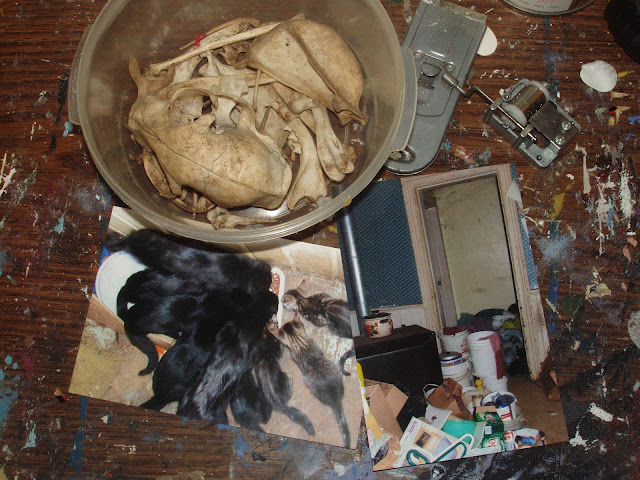 One difference between my build and the reality of the house was that Virginia was a hoarder.  She had filled the entire house with boxes of things and her living space was reduced to just a small area where she sat by the front door.  She would receive her delivered groceries to this door and from there she would fill her cupboards and feed the cats.  Outside this radius of chair and stove it began to fill with debris.  She was able to, at one point, go to her bedroom but in one tape she describes a collapse of of a tower of her hoarded items which then made the trek upstairs impossible.. so she began to sleep in her chair by the door.  The photos on my desk show some of the feral cats who lived outside her door as well as some of the debris in the front room.   Virginia encouraged me to tell her story and to do so all the cassette tapes she had made over the years had to be found.  Not an easy task.  I spent many hours listening to the tapes and one thing I wished to portray with my machinima was that her tapes were not just of her speaking about her mental illness but rather a variety of things including her recording her favorite music and in the case of the one above.. singing along with them.  Hearing her sing to the final song in the machinima or on other tapes really affected me.   As an artist I guess I am a pretty visual person, so for me I would imagine her with her cassette player recording a favorite song from the radio, sitting alone contemplating her life.  Each tape I listened to was about an hour long and there were hundreds.   Some full of music,taped telephone calls or radio programs.  Others would be about her struggle to understand what assailed her though not understanding it was Schizophrenia.
Then there were the tapes where she recounted an event that transpired.  They would be explained from the perspective of someone who could not see but interpreted events occuring around them.  So for example hearing banging in the basement and wondering at its cause but never fully being able to explain it,  or noticing snuffling noises by her piano and questioning whether it were a raccoon or cat or her mind playing tricks.  One tape described the other cats killing and eating one of their own.  After hearing this tape I knew there should be some kind  of evidence of this happening and was able to locate the bones the next time that I returned.   Much of my interpretation is based around discovering clues or references then actively searching for and then speaking to her about them.

I will go through each machinima I have made for this project and give some insight, then upon completion I will close the exhibit.  So go have a look now if you would like to see it in person.
SLURL http://maps.secondlife.com/secondlife/Immersiva/18/129/21
So far the build has been up for over two months and has had just under 15,000 visitors worldwide.  Quite rewarding when I compare it against my traditional art openings in first life.  The access that a virtual world offers is remarkable.
Posted by Bryn Oh at 12:10 PM 2 comments:

One of the unsung art patrons of Second Life is Amase Levasseur. She owns Originalia and is part owner of Art Screamers, but often she flies under the radar of many who follow the arts scene in our virtual world, she is just a very unassuming person. Six months ago Amase offered her region Originalia to host my build Anna's Many Murders and I greatly appreciate her generosity.
Sadly the time has come for Anna's to be removed, but new artists will take over the space, so that in itself is something to cheer about. Anna's Many Murders will remain up until the 28th of September so there is still time to see it again or perhaps for the first time.   This is the slurl..
http://maps.secondlife.com/secondlife/Originalia/58/221/108
There is also a real life book should you wish to warp some small child's mind or keep it for yourself and gently warp your own.  You can find it here... http://www.blurb.ca/books/2360325

And lastly if you would like to know where the idea came from then this post explains it..
http://brynoh.blogspot.ca/2012/03/annas-many-murders-on-originalia.html