First of all please, if you wish to watch the machinima, then do so in HD as the text will be hard to read otherwise.  To choose HD click on the video, then pause it, there is a symbol at the bottom right that looks like a gear or sun and then from there pick the to one at the top that says 1080.  Can go to my youtube site if it is easier http://www.youtube.com/watch?v=urmhu0jAZD8

I  have created a machinima for the poem Juniper which is one of the rooms within Imogen and the pigeons narrative on Immersiva.  It is my entry into the University of Western Australia's machinima competition. Also in a fit of productivity I have begun creating a marketplace shop which now contains one item... the sculpture for Juniper.  By clicking the poem on the front of the sculpture it will link your guests to this machinima above.  You can find it on marketplace here... https://marketplace.secondlife.com/p/Juniper/5045110 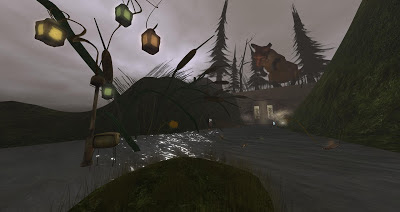 I should also mention that I have a shop in world  thanks to the generosity of residents Richard Dexterity and Taishatai  the slurl is here .. http://maps.secondlife.com/secondlife/RiTai%20East/68/137/21  It has pieces of most of my recent builds.  All proceeds will go into paying tier for Immersiva.

I have also made curiosity cabinets and little curiosities to put on those shelves if you like a home with interesting little oddities for guests to click on.
Posted by Bryn Oh at 6:42 PM No comments: Links to this post

It is again time to apply for an Artist in residence land grant.  The LEA Land Grant program seeks to promote and nurture the arts in Second Life, through a five-month land grant to recipients. Recipients can be individuals or groups interested in creating or curating art, or proposing cultural projects which would require/utilize a full-region build and can be completed within the allotted time frame. The LEA is able to offer land grants through the generosity of Linden Lab.


Thank you Ziki Questi for letting me use these images!

Posted by Bryn Oh at 9:15 AM No comments: Links to this post 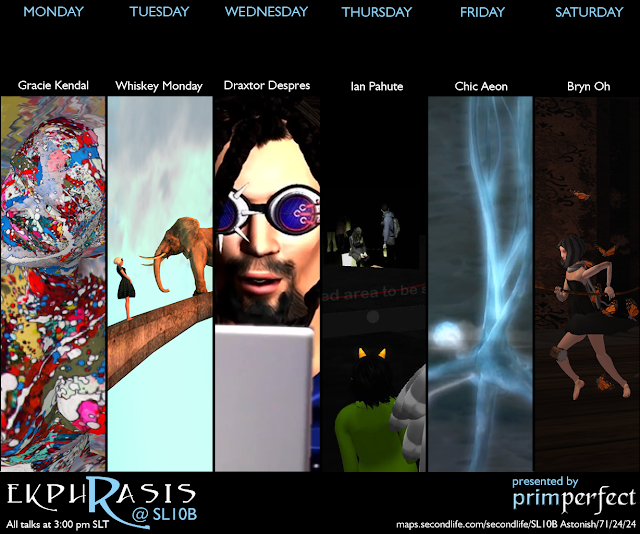 Rowan Derryth does some interviews for Prim Perfect at SL10B this week, each at 3pm SLT. 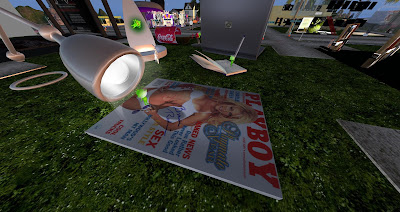 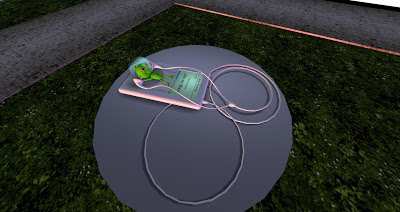 I was asked by an organizer of Second Life birthday 10 last week to fill up five parcels (or hopefully more) that were not claimed by exhibitors.  In my mind I was telling myself.. "no don't accept you don't have time!" but my typing fingers said "ok".  I must admit that I was a bit cross with my fingers at first but then I had an idea.  The theme for the birthday event this year is to do with remembering the history of SL.  As it happens I have a bunch of works done by Light Waves / Starax from Greenies and Black Swan sim.            The greenies sim was a massive place where your avatar was about the size of the green aliens in the pictures.  You were in a giant house .. hard to explain but you can click the Greenies link if you want to see a very tiny machinima I made a long time ago.  But what better way to tie into that theme then by exhibiting one of Second Life's early and influential artists?  I set up two parcels of his various works and within a few hours of completing the set up I received a message by a ranger named Pygar Bu who informed me that the "massage tool" and images on a book cover were inappropriate for a general-rated region.  The "massage tool" is called a vibrator btw.  It is not a bad word.  And really? the image on the playboy magazine?  It's not even nudity.  I responded by saying that I have had discussions with Lindens directly from being in the LEA, and we have discussed what is permitted on general rated regions.  Both are fine according to our discussions in the past.  The response was again that they were not appropriate for general rated regions.  Case closed.  And you know how you always think of things to say after you have walked a block down the street or after hanging up the phone... well what I thought up after was that Greenies was in fact on a pg rated region, and the vibrator and magazine were on it.  Anyway, I decided to withdraw naturally.
Now North American society is pretty conservative.  Nudity is, for some reason, more regulated than images of graphic violence.  Coincidentally, I watched a European movie last night called "The Pillow Book" by Peter Greenaway.  An alternate title for this movie could have been Ewan McGregor penis.  It is a great movie.  An artistic movie with a unique story.  And by the end of it I felt like I knew Ewan McGregor's penis, like he was one of the characters in the movie.. flopping around so happy and carefree.  So how can one society be completely fine with nudity while another is.... oh hold on sorry.  My mistake.. there was no nudity.  There was a woman in a bikini.  And a massage tool.


A Rusted Development from Ziki Questi on Vimeo.

Over the weekend a long standing collaborative build came down.  It was called A Rusted Devellopment and was curated by Rowan Derryth.  Each artist was pretty much asked to create something wherever they wished to.  I made a little nest up in the crows "nest".  Was quite tiny and cant imagine anyone found it.. though Ziki did as it is in the machinima.  It was fun to be a part of and I am happy to see Ziki Questi trying out machinima.  I think she did a great job and little does she know that she is probably now hooked to machinicrack.
Posted by Bryn Oh at 8:12 PM No comments: Links to this post