As we come up to the final scene in the story of Hand we pass through a few rooms and obstacles.   The first is past the Dancer who I have a very exciting post about next week.  I have taken the plunge to do something RL with her and will share it soon.

So first we come to a room with a variety of boxes, planks and other debris that the kids have placed in order to make a ramp or stair past a hole in the floor.   They did this because the emergency 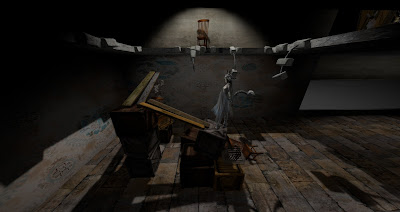 escape running along the outside of the building has collapsed in one part.  The visitor gets to climb this in the light of day but as they get to the next floor of the apartment we discover it is one that has had all its windows boarded up making it quite dark inside (if you used Firestorm then you will see just this level go very dark as I have set the windlight by altitude)  while in the dark you come across a dancer in a room with another Spiderbot peeking in projecting an advert for the Shelterball. Another set of boxes and ramps to climb in the dark and you have reached the top floor where Flutter and the others live. 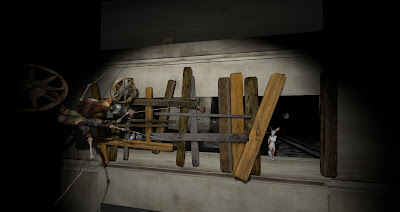 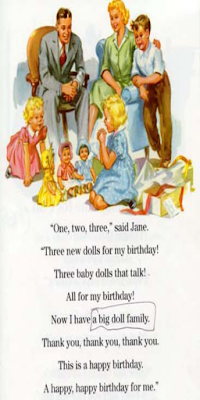 sitting around which seem out of place.   For example a TV set and vacuum cleaner which don't work without power, nor do the kids really even understand what their function is.  But why would they collect them?  The children, along with the occasional steering help from Milkdrop, try to piece together what the old world was like.  The comb the cites and libraries and have focused on old children's books called Fun with Dick and Jane.  The would cut out and staple different pages that seemed to elaborate on what life was like or more specifically what a family was.  The Dick and Jane's that they have cut out all have a connection to how they are feeling or what they 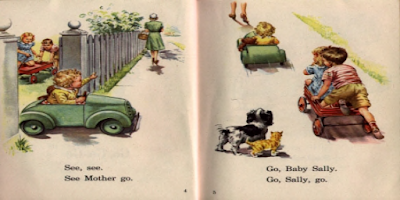 are trying to understand or missing.  Flutter uses the mannequin hand as a surrogate mother.  And the children also collect various things from the pages they see.  But their biggest treasure is a dollhouse.  They have, over time, collected all the parts to fill the doll house from the ravaged city.  Tiny beds and chairs, children dolls and on the couch lay a father doll.  They had everything except one missing piece.  The mother doll.  And that is what Flutter carried home in her suitcase throughout 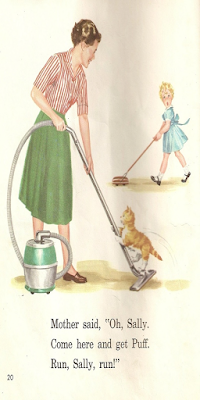 the story.  During her days search she came across a 1959 Barbie doll and excitedly she brings her home to the other kids.  How the children learn about families and the past is by playing it as a sort of game.  They play at being a family and on different days they each get to pick one character from the family to be.  They role play the stereotypes they have learned and, Milkdrop hopes, they will eventually create a new society whose goals and morals the Singularity AI can shape.  Milkdrop is starting the world again with these children and others.

The children also collect references to the sleepers.  Mainly stories about sleeping beauty or things going away.  Flutter craves a family as do the others, but they also are building a family with the subtle guidance of Milkdrop.  In the final portion below Flutter unveils the Barbie doll to the other children.  The 1959 doll, the first Barbie I believe, inexplicably has her in a bathing suit.  Teddy, from the previous story Gretchen and Teddy, can be seen being held in Gretchen's arms and is a PowerPet that existed during the period 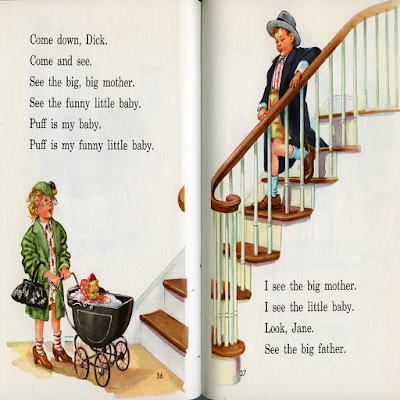 before the long sleep of society.  He is old and broken but remembers how it used to be.   He mentions that the Barbie looks cold and instantly draws the ire of Birdy, a boy who.. well... always pretends to fly like a bird hence his name.  The Barbie has already become a idol of sorts, mere moments after emerging from Flutters suitcase.

Below is the final part to the story "Hand".

Ironically it was my tenth rez day yesterday in the virtual space, and Hand is the latest chapter in the overall narrative that began almost ten years ago with the Rabbicorn.  I hope you enjoyed the story.

Flutter gently, almost reverently, took the Barbie doll out of its packaging.  She held it out for the other kids to see as though presenting a religious relic found amongst the bones of a lost civilization.
Gretchen whispered to Teddy  "It's a mother."  The PowerPet was old and damaged, there was a distinctive whir as it looked down upon the doll.  "She looks cold" he said in its warm teddy bear voice.
"You are just jealous Teddy!"  exclaimed Birdy  "All mothers dressed like this!".  "No they didn't" replied Teddy who had existed before the big sleep.  "Did too!"  Countered Birdy using the ageless children's retort.  "Well Jane doesn't"  stated Billy Boots looking across at the Fun with Dick and Jane pages mounted on the wall.

"Not Sleeping Beauty either."  They all turned to look at Willow, their unofficial leader.  She had been looking quietly and steadily at the dollhouse.  The Father on the couch, the children upstairs.
"It doesn't matter," she said finally.  "The Dick and Janes don't tell us everything."  After a moment she continued "Whose turn is it?"
Flutter stood up excitedly "It's my turn today.. and I pick the Mother"
"Of course you do," said Birdy.  "I am next and I pick the Daddy."  Everyone groaned.  Birdy was not a very good player and all preferred him to be one of the children instead.
"Gretchen why don't you be the daughter and Billy Boots you be the son.  I will be the fact checker."  Said Willow.  Birdy stepped towards the doll house  "As the Daddy I tell the TV to make dinner."
"TV's can't make dinners!" shouted Billy Boots "Mothers do that!".  "And sometimes Fathers" added Gretchen.  "Well then what about TV dinners!?"  Said Birdy victoriously.  They all turned to look at Willow the checker for a ruling.  "TVs told stories to the family, sometimes during dinner, but they didn't cook."  she said decisively.  Willow turned to Flutter.

"Your turn" and everyone watched expectantly.

Flutter looked down upon the mannequin hand, then gently placed it within the suitcase.  She took the Mother doll to the front door of the dollhouse and then said in a whisper.