The visitor follows Flutter across the broken antennae and jumps to the roof of Robins clothiers.  From there we walk across some wood beams into a broken window of the apartment building.  The rest of the story takes part in this building as you climb.  Some rooms are fairly empty.  An old bed or cupboards with cans of food.  Some furniture but in general most are quite deserted.  Flutter goes to one room where rests a pod person.

Flutter continued her routine by stopping to visit one of the pod people.  She looked upon the girl and squeezed the plastic hand within her own comfortingly.  She could almost feel the hand continue up into a warm embrace as she looked upon the still form.  "She looks a bit like me, and I like to think that she could be my mother.. but I don't remember.  Birdy says that she is his mother but they don't look anything alike."  She said dismissively.  "She is sleeping and dreaming in her other world.  They are all like sleeping beauty,  I have kissed her before but she doesn't wake".
"You see the jar on the side mother?  That keeps the sleepers alive,  and we eat those too." said 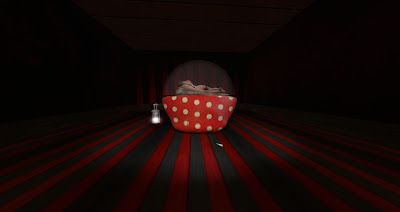 Flutter taking on the role of a teacher patiently explaining something to a child.  "They don't really taste like much, but just a little on your finger and you won't be hungry for a month."  The woman was naked for comfort, yet decided to sleep still wearing the latest fashionable hat.  Flutter watched her for a few minutes then continued " If the food canister runs out for a sleeper then they die not long after.  My mother still has lots in the bottom and she will come back to me before then... I know she will." 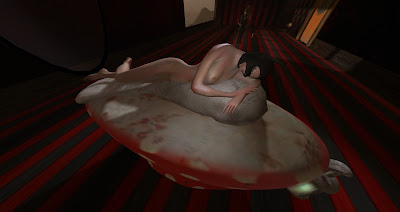 Most of the kids have long since grown accustomed to the pod people in the various apartments.   The kids live and play around them, relegating them into a type of living furniture, but many, out of the corner of their eye or in quiet times such as now with Flutter, many will watch the sleepers with longing.