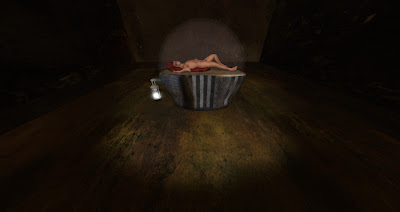 Leaving through a creaking fire escape door the visitor climbs the metal stairwell up to the next floor.  In one room lay another sleeper.  A naked man with a faint smile on his face, due to something pleasant no doubt occurring in his virtual life.   Often the rooms the sleepers are found in are completely barren of all expected furnishings.  There are few with book shelves, stoves, fridges, entertainment screens or even

furniture for hosting a guest.  The rooms are now functional spaces to hold the pods.  Apartment buildings already are an inefficient use of space when compared to the pod apartments.   Across the hallway into another room we find part four of the story.

Flutter walked into a room to discover a pale boy sitting upon a giant white moth.  A little rabbit hopped about pestering them both.  "Oh mother this is Milkdrop, he is the Singularity AI"  She paused a moment as though arranging her thoughts.  "He is more like a person than the Advert Spiders and Drones, but he is not like the other kids.  He is very nice though, he makes games for us like Turing Weekend or Turing pups and kittens.  We have to pick which things are real or pretend."  Flutter smiled to Milkdrop "Milkdrop this is my mother."
The Singularity AI looked upon Flutter and replied earnestly.  "That is a plastic mannequins hand taken from the Christmas display window at Robins clothiers,"  He paused for a moment.   "However, it is a pleasure to meet you Hand."
"Mother come pet the moth, it is so soft and powdery."   Flutter caressed the moth gently with the hand.  The moth barely reacted having been petted countless times before.  Flutter stood up.

"Well goodbye Milkdrop we must get back, I have finally found the lost piece to the home, and I get first pick tonight!"

You may have recognized Milkdrop from the Singularity of Kumiko or The Gathering artworks.  In the Singularity of Kumiko he appeared later in the story when the doctors feared the introduction of Mr Zippers, her childhood PowerPet, to her induced coma didn't go as planned.  He was a mysterious character who we now discover is the physical representation of the Singularity AI
which controls everything.  Essentially Humanity entrusted its future to a mind that grows exponentially.  The advancements and inventions arrived rapidly but while Milkdrop began is life programmed to be close to human in its goals and morals, exponentially it changed its perceptions on what was best for the world.   Milkdrop determined that it might be prudent to start over again where humans were not destructive parasites on a planet, but something more benign with less materialistic and violent goals.       Humans created a concept called an economy which dictated decisions that were detrimental to their habitat, yet they ignored the planet and its natural sustainability to house life.  Strangely backwards.  The planet, being indifferent to that which grew upon it, had developed a fine balance, over time, that had allowed for life to exist on its surface.  Milkdrop truly appreciated this remarkable and unlikely balance that allowed for humanity to exist, and determined that humanity should follow first the biological laws of the planet before the man made laws whose importance was vastly over rated by humanity.  This, Milkdrop felt, required a reboot.  A reboot that required a gentle euthanasia of the affected population.  Flutter and the other children were the Adam and Eves or perhaps the Dick and Janes of the new world.
Email Post