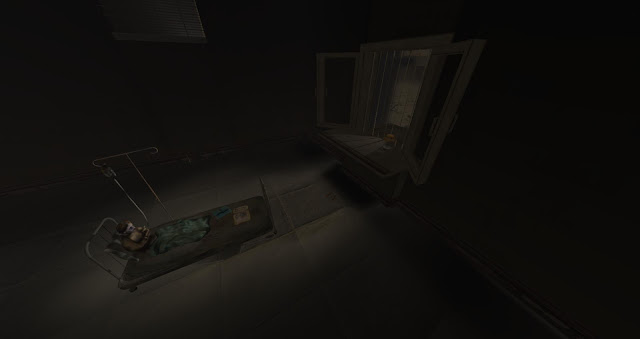 Coming into the final room, all the characters along the hallway just facets of her own personality, a prelude and now we meet Imogen.


Imogen sat
quiet on her bed
the books on her mattress
one hundred times read.

to join with them
out past her bars
where no one could test her
with Monarchs in jars.

She rose from her bed
tube fallen aside
and determined to join
her pigeons outside.

But will they fly
off to the skies
unless I wear
a clever disguise? 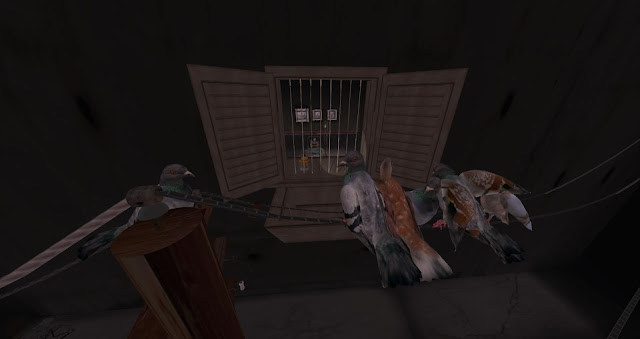 Imogen appears to have experienced a great loss in her life, but we don't yet know from what.  The view from her bed in the asylum is her TV from where she watches the pigeons outside her barred window.  They are all she knows and over the years she becomes enraptured by them.  She watches them huddled as a family through winter and summer, a society's nuisance which she has seen past to something deeper that she craves.  Her dream is to join with them in their little family, the feeling of being pressed on both sides by a tight warmth and soft cooing.  Perhaps this would let her forget. 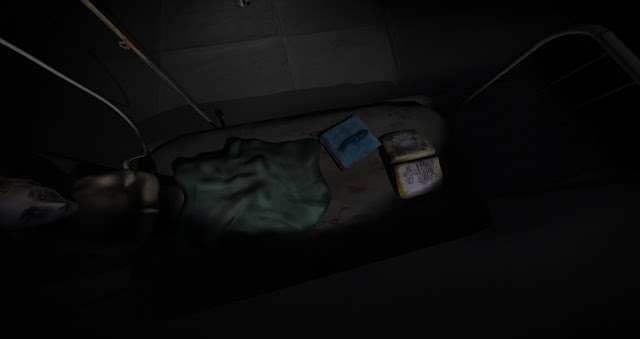 On her bed lies two books which she reads over and over again.  So many times that they have become ingrained in her reality.  A book on whales and pen and ink drawings.  She sets these aside and begins her quest to craft a disguise, a pigeon dress, that will let her fit in with her friends out on the wire.

On the floor by her bed is a symbolic feather which the viewer touches to begin Imogens story.  They bypass gravity and rules allowing them to walk up walls and proceed within the story.  Up to this point we are in Imogens recorded life in programming code.  If our memories could ever be transcribed into code, would humanity's next goal not be to then edit that code?  Removing the parts that cause pain and rewriting warmer outcomes.  You see immortality is nice, but then perhaps it can be improved.  Imogens life is written on a computer whose wheels still turn centuries after society has collapsed, yet she possesses or developed a new awareness within this construct and sets out to change how her life unfolded.  Her love a virus in the machine.