Imogen and the pigeons - the rapist


The second stage to Imogen and the pigeons begins with the guest arriving into Imogens recorded memories.  The original idea was to have a password type protection for her memory software and this took the form of a digital secretary.  A sign said

"The secretary looked up
her eyes rezzed so blue
"Do you have an appointment?"
To which you replied "yes _ __"
And the guest would have to reply in local chat "I do".  Unfortunately when I did a few rounds of testing only around 10% would actually type "I do" in local chat.  So that part was a wee bit too hard, and considering it was the very first room...not good .  It was not actually hard but more unintuitive I suppose.  Once you pass the secretary you come to the first poem. 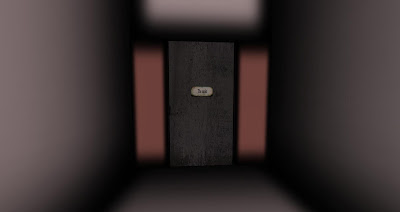 "An unfortunate space
that the printers missed,
changed the psychologists plague
to read the rapist" 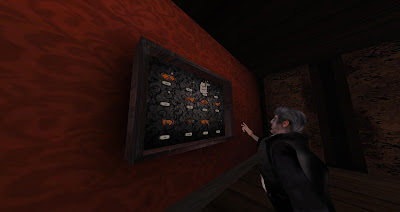 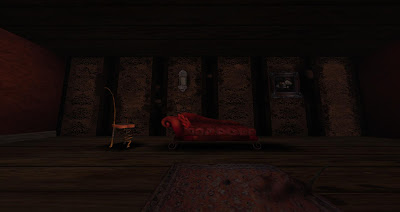 His patients were pieces
within a game
which when molded correctly
would bring him acclaim." 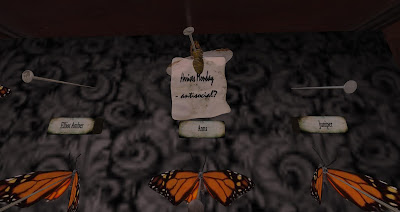 The first room introduces the therapist.  He looks after a variety of quirky patients, and to each one he entrusts a monarch butterfly to care for.  Part of his curing process is to let the patients raise a butterfly from caterpillar, puppa to butterfly.  He keeps a cork board on the wall with a butterfly pinned above his many successes.  Each has a nameplate and the empty ones are for those not yet "cured".  At the top is a note that states that on the Monday a new patient named Anna will arrive.. and he puts in a notation that she may be antisocial.  I am sure he can handle any patient though.  The closet and chest are full of pose balls on hangers, no surprise as we all are aware that any good psychologist needs a variety of them for their patients.  On the shelves are various interactive pieces which contain poems or machinima.   One is the machinima for Cerulean.

Mayray said…
I am astonished! These are beautiful works here. They all remind of me of the Arts Appreciation course which I did at the University of Nigeria http://unn.edu.ng More grease to your elbow.
April 10, 2013 at 10:33 AM