Imogen and the pigeons part one 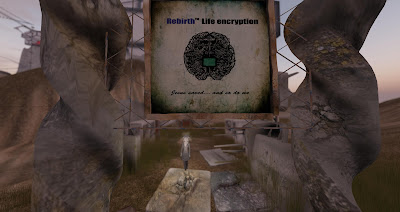 You arrive to Imogen and the pigeons amongst sandy dunes and rubble.  After passing the skeleton of a structure you come across the remains of what appears to be a store.  The sign above it gives a clue, it says "Rebirth Life encryption - Jesus saved... and so do we" 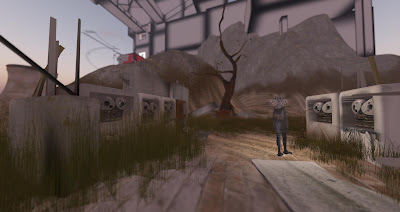 In this society they had discovered how to record ones life experiences and memories onto computers in a digital format.  People would pay to have their life preserved for a future when technology would allow these stored memories to be installed into a new biological vessel.  The human races quest for immortality almost achieved.  But looking around one can see that this society has met with a catastrophe.  It is unnamed, perhaps plague or war, but whatever the cause it happened a long time ago.  Just inside the shop are rows upon rows of stored lives on computers that have all ceased to function.  Sand, rust and time have conspired to corrode the machines causing them to fail.  There is, however, one working machine whose wheels still have continued to turn.  Looking behind its dusty glass will reveal the name of the person whose life is recorded digitally onto this still functioning computer.  That name is Imogen. 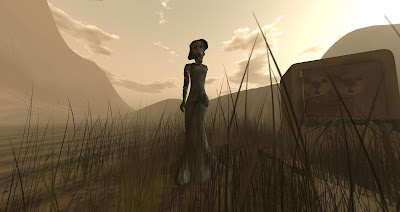 This story takes place inside the digital recording of a woman's life.  Beside this centuries old relic stands an antique entertainment bot from this society.  It is a replica of Vera Lynn, the WWII singer, and this machines role was to walk the streets and sing for the commuters and tourists.          After the societies collapse she continues to seek out an audience, as that was her function, yet everyone is gone so she sings to the last remaining fragment of humanity which takes the form two spinning spools that have translated love, happiness and loss into zeroes and ones. 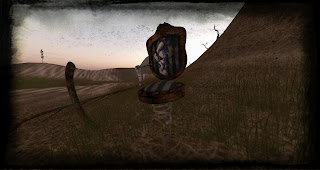 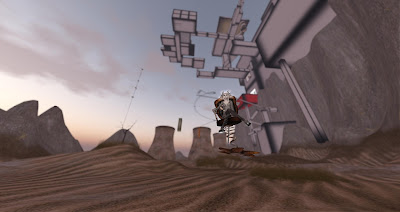 Not far from here lies a partially submerged chair that, with a little prodding, can be coaxed  back to life and allow you to fly around the desolate landscape seeking the entrance to Imogen's memories, which begin at the red cube in the sky.  There are other ways to reach the start such as a self building walkway as well as a spiral staircase rising above the nuclear silos.  It is a difficult path and symbolizes an anthropologists quest to uncover and piece together a long dead civilization.  An architectural dig not into soil and stone but rather hacking into code found inside some still functioning technological salvage.  This is the prelude to Imogen's story and the next post will be the first steps into her recorded memories.
Email Post