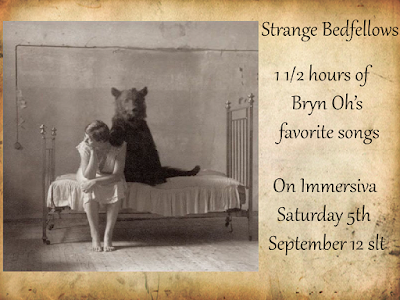 I was speaking to Johannes1977 from Windlight magazine the other day and he asked me why I never had events where I played music on my region Immersiva.  I said "I dunno".  So today at 12 noon SLT Johannes will be playing a selection of 23 songs which are ones which inspires me in some way.  As you can imagine its a fairly melancholy set of songs.  I am a big music fan.  I have always felt that I could have been a music star had it not been for my lack of musical talent, rhythm, grace and charisma.  If my voice didn't sound like two dogs fighting over a broken fire detector and other factors, then I really believe I would have been a superstar.  Alas it was not meant to be.  So instead I will list off the songs I picked and say a few words about why I like them.  The first song to be played is called Keep the streets empty for me by Fever Ray.  I never get tired of this album and I have been listening to it regularly for years.  You know how you get obsessed with a band and listen to them to the point that you finally overdose and don't want to hear them anymore?  This album by Fever Ray is one I really never get sick of.  Actually I am not going to talk about every song as there are 23 so just will pick some randomly.  The third song is called Courtship Dating by Chrystal Castles.  This band is really interesting to me because much of their music is created using an old Atari 8-bit chip.  I also liked the idea that they used a screetch/scream by the lead singer as a catchy repeating sound during the song.  How is a scream catchy?  I don't know but it works for me.  The next song is a beautiful piece by Lykke Li called I know places.  For me there is a very satisfying type of melancholy that makes me wistful, sad and content all at once.  Many of the songs on this list are ones that draw out in me that feeling.  If you are hoping for a lively set then stay away!  It's more of a sit in the wheat and relax set. 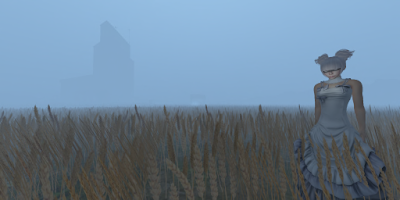 The next song is werewolf by CocoRosie.  A unique voice for me is also a huge draw.  Combine that with lyrics that actually say something and I am hooked.  Many of the songs on my list are lyric driven in that they tell a story.   The story must be unique and not focused on radio play.  What I mean by that is the song must not actively be written in a formula to be successful.  The radio is filled with relationship songs ad nauseum.  There are a few relationship songs on my list but they all have more going for them beyond the lyrics.   Nouvelle Vague's Guns of Brixton are interesting lyrics, The Decemberists Grace Cathedral hill and actually all their lyrics for as long as I can remember are exceptional.  Pink Bullets by the Shins is,  I am fairly positive, about two people being launched by catapult in medieval times over the walls of a city to their death.  But the most remarkable lyrics for me is in the final song by Nick Cave and the Badseeds called O'Malleys Bar.  It is an epic song at around 15 minutes long (first sign they had no intention of it ever being on the radio) and the topic is murder.  In fact the whole album is called Murder Ballads and I remember the first time I heard it I couldn't believe they would dare write a whole album like this.  It is the bravest album I know of.  O'Malley's Bar is disturbing and ruthless but brilliant.  It is not the glorification of violence as it might at first seem, but rather a depiction of the delusional grandeur and cowardice in which light the lead character sees himself.  Sadly I had to keep the list at a manageable size so I left out my vintage favorites like Vera Lynne, Billie Holiday and picks from the 1920's.  Here is the full list of songs but please come listen to them with me and perhaps you will find some new favorites.