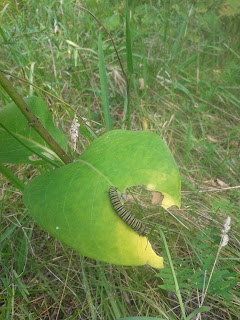 Each year at this time I wander around fairly aimlessly searching for a monarch caterpillar on some milkweed in the woods.  I found this one munching away happily and brought him home in a mason jar.  The picture below this one shows one of the milkweed pods that also grow on the plant.  They will dry out and burst releasing hundreds of pretty seeds that will float around here and there.  If you have been to my region Immersiva you will have seen these seeds periodically appear and drift around.  The milkweed plant gets its name from the milky white liquid that you can find inside if the stem or a leaf is torn.  As a child I remember tasting the milk with the tip of my tongue, hopefully due to a dare but quite possibly because I was just curious.  It tasted horrid which probably makes the caterpillar itself taste terrible as well though I did resist that test.  But it explains why birds generally leave them alone.  My monarch caterpillar has been eating solidly for a few days and has just now turned into a pupa (chrysalis) which you can see in the bottom picture.  All along a ring at the top of the pupa you can see tiny gold spots that are just remarkable.  Their colour is actually more vibrant than real gold.  Can't see it in the picture but gah so cool. 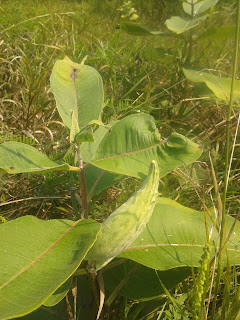 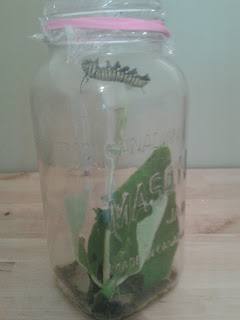 I decided to name this one Mr bitey and, if all goes well, he/she will emerge in a week or so as a monarch butterfly and after drying off for an hour or two will begin its trek all the way down from where I am in Toronto, Canada to some mountains in Mexico.  I won't know if this one is male or female until it is born.. if it has black spots along the wings then it is male. 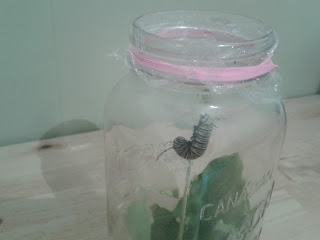 Our particular monarch butterflies will fly south to point Pelee where they will coat the trees there like leaves waiting for a moment to, en masse, fly across the lake into the United States.  They fly between 2,000 and 5,000 kilometers which is the second longest migration of all known insects.   Since each butterfly lives for but a month, then it is only their offspring who eventually reach the mountains in Mexico.
Mr Bitey here is destined to make it half way before dying and being replaced by little ms nibbles his unborn daughter. 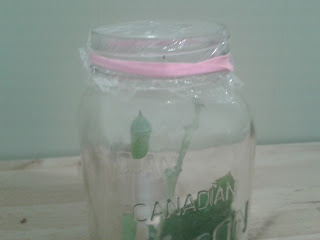 Sadly there habitat is being damaged so there is a current plea for people to leave the milkweed
plants to grow as food (they are considered a nuisance) or if you are like me.. plant some.

Below I am including a short movie I made of "Lego" being hatched and I was so excited to capture him in film just as he flew off to start his journey. 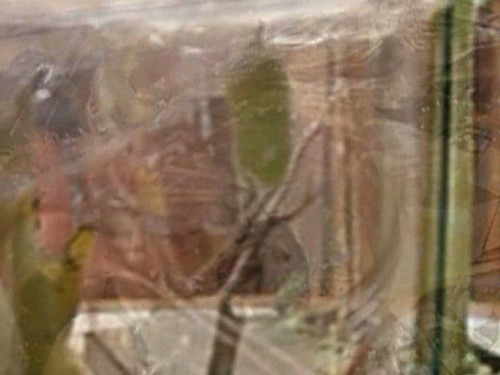