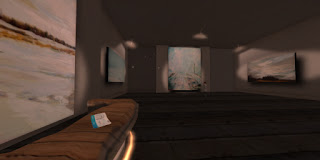 Before I begin with Lobby Cam I just want to say that yesterday Madpea did their annual auction of Second Life people and their skills to a cause which helps to build Schools in Kenya.  I would like to thank Cassie Parker who donated 15,000 on top of the winning bid for me of 45,000 for a total of 60,000.  The overall event was able to raise enough money for the school so congratulations to all involved.  If you are looking for a good book to read then there is one I have read with parallels related to the need for schools in the refugee camps in kenya called What Is the What: The Autobiography of Valentino Achak Deng by Dave Eggers.  It is a true story about the lost boys of Sudan who walked endlessly to find shelter from the civil war. 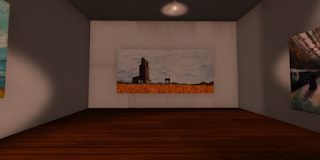 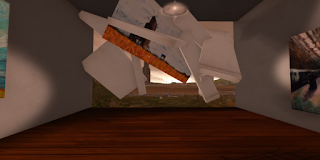 When you arrive to Lobby Cam you will find yourself inside an art gallery.   On the walls are a variety of oil paintings which I have done over the years and if you look around you will also find a train ticket departing from Saskatoon to Toronto.   There is a person in the gallery looking at the paintings and her name is Fern.  This scene at the start is actually the optimal ending for this story.  It is where the main 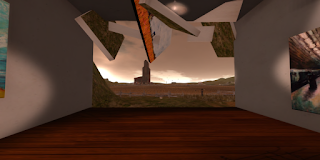 character travels to Toronto to have an art exhibit hosted by the mysterious woman who he names Fern.  This room means nothing unless the visitor goes through the story and writes an appropriate letter to Fern which convinces her to offer him an exhibit at her gallery.  And it also requires that person to come again another day to the exhibit and realize that the scene is related to that, as it is natural to forget this first room after leaving it to experience the rest of the story.  To everyone else this gallery setting is the starting point where they obtain a hud to experience the narrative for Lobby Cam.  It illustrates the notion of the evolution of immersion from the painting to the virtual space.
Walking down a hallway the visitor will come to an oil painting of a Saskatchewan grain silo with its accompanying railway.  In front of this is a rich field of wheat painted in cadmium yellows, oranges and reds as only an oil painting can truly achieve.  Sorry acrylic painters but your acrylic emulsion binders sadly don't allow for the full range of pigments and their spectrum to show compared to what linseed or safflower oils permit.  I wont rant about that, but I bet you didn't know that artists get snarky with each other over the paints they use.  I am not saying acrylic painters are necessarily bad people, I think that goes without saying, but I do think in general they are morally questionable types, and perhaps if you cross referenced crimes 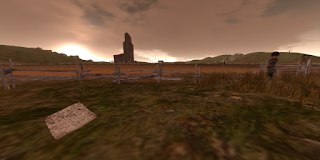 committed by artists worldwide then I suspect the vast majority would be done by acrylic painters.  Just saying.
Anyway, if you walk closer to this painting on the wall you will see if break apart and float away revealing the paintings location as a 3D virtual space.  Almost immediately you will discover a torn page on the ground which, when touched, adds a page to the hud which is a recreation of a man's diary.   The
diary itself lays outside the converted grain silo in a torn mess as though someone, in frustration, wanted to be rid of it.  The first page in the diary reads... 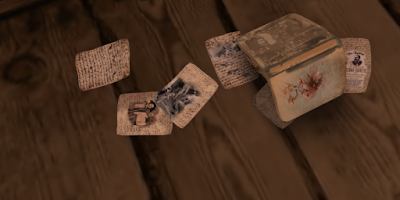 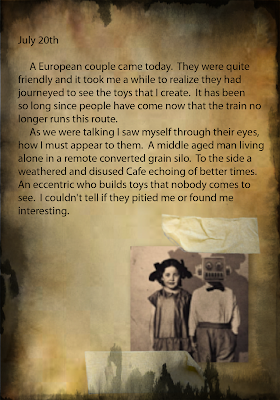 
A European couple came today.  They were quite friendly and it took me a while to realize they had journeyed to see the toys.  It has been so long since people have come now that the train no longer runs this route.


As we were talking I saw myself through their eyes, how I must appear to them.  A middle aged man living alone in a remote converted grain silo.  To the side a weathered and disused Cafe echoing of better times.  An eccentric who builds toys that nobody comes to see.  I couldn't tell if they pitied me or found me interesting.

Turning over the page (by clicking on the July 20th entry) reveals another entry on the back written a few days later. 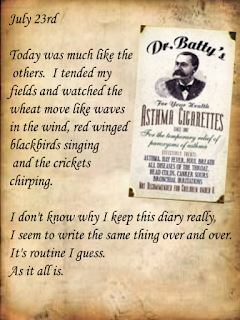 
Today was much like the others.  I tended my fields and watched the wheat move like waves in the wind, the red winged blackbirds singing and the crickets chirping.  I don't know why I keep this diary really, I seem to write the same thing over and over.  It's routine I guess, as it all is.

This is the introduction to the story and with each page found the narrative begins to unfold.