I don't think I have said this in a while but I probably should mention that this blog is meant to catalogue the artwork I have created over the last several years using the virtual world as a medium.   Years ago I would be building on the IBM sandbox beside AM Radio or experiencing something by Gazira Babeli.  Having fun in a wonderful creation by Four Yip who was a personal favorite of mine, or seeing work by the superstars of the time with names such as Seifert Surface, Scope Cleaver, Madcow Cosmos and many others.  It was really a positive and exciting time in SL.  I think I have mentioned before that Glyph Graves and I were new around the same time and would often explore and absorb together the new works that would appear.   Sadly I think most of those names are forgotten now as many are lost except in places like Bettina Tizzys Not Possible in Real Life blog  http://npirl.blogspot.ca/
I remember AM Radio saying to me and my friend ColeMarie that he had simply run out of ideas.  He had burnt out.  Others like my artist friend Aurakyoo Insoo simply disappeared.  Some artists are prolific and are fortunate enough to have many ideas that span years, some have simply one or two magnificent ideas and then are done.  You never really know, and that is kind of why I began keeping track of what I was doing on this blog because one day I will simply burn out too.  I felt that this medium was unique and I loved the idea of possibly being part of a new movement that could one day be spoken about in an art class somewhere.  So anyway, this blog is meant to catalogue my work for someone who stumbles upon it ten years down the road, I just wanted to make that clear as I sometimes fear it could come across as being supremely conceited to have been talking about myself for the last several years or whatever it is.  Ok back to the explanation of the build.

The viewer turns from the bedroom and not far off is a dark scene showing Abraham watching TV late at night.  In my version Abraham is contacted by God through the television set and told..

Modernized - "Abraham!”And he said, “Here I am,”God said, “Take your son, your only son, whom you love—Isaac— and go to the Moriah Towers. Sacrifice him there as a burnt offering upon the building I will show you.”


Original - "Abraham!" And he said, "Here I am." God said, "Take now your son, your only son, whom you love, Isaac, and go to the land of Moriah, and offer him there as a burnt offering on one of the mountains of which I will tell you." 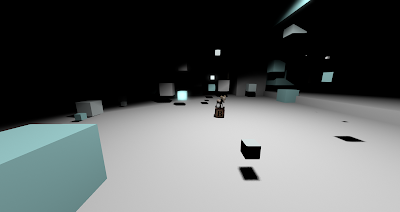 One of the things that I felt was important was to not change the narrative from the original to a degree where the modernized version was no longer applicable.   I wanted to simply change the perspective a bit and see if it affected how we would view the story.  So if Abraham, in speaking to the police, were to say that God spoke to him through the TV and told him to kill his son, then he would join a multitude of others worldwide who had been spoken to through a TV.  Those people are generally referred to as being "crazy".  That idea doesn't come up in the Bible because it is not told from a 3rd person perspective of an observer.  I mean its perspective really.  I remember once walking down the sidewalk in Toronto to see a man walking towards me with an axe.  I had my headphones on but I could see him talking out loud and it freaked me out, though I think it probably didn't show.  I wondered if he was a psycho, and thought about crossing the street, but strangely I felt like I would be insulting him if I did that and he wasn't a psycho killer.  I mean like why would you care about that? .. yet in that moment I did.  Anyway it was just some guy who had bought an axe and was walking home with it and I guess  he was talking on a blue tooth.  He was completely unaware of how freaky he looked.
Leaving this scene brings the viewer through a room that was, to me, something that suggested a breaking from reality.  I imagined a sane person being told to kill their son by a God, and that they  maintained their sanity while determining to do so.  I envisioned the moments afterwords where Abraham may have sat staring at the TV while his mind rolled and twisted with horror.  That he would stand and perhaps follow some simple routines such as placing the TV remote in its usual tray where it doesn't get misplaced.  He would walk, dizzy and slightly ill, to the kitchen to open the fridge in a daze, registering nothing inside as his mind spiralled in turmoil.  That was the idea of the room but also it is important in a build like this to create some variety for the viewer.  In a painting you shouldn't do the same brush stroke over and over for the entire painting.  You can create some thick paint areas with a giant brush, then thin bits, then a palette knife then something very thin and 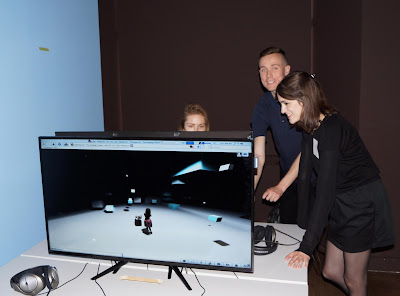 runny.  The eye travels over the artwork and sees the texture almost as a landscape.  The eye roams over the surface and can become over stimulated or desensitized if there is too much, so then you create perhaps a area that is just pure canvas with a light wash over it.  The eye arrives here and "rests" before it moves on.  Now the virtual space is a new art medium and naturally you shouldn't try to blindly apply traditional concepts in art over it simply because you don't know what else to do.  But having said that, you need not throw away centuries of communal knowledge either.  This room creates a variation or break for the viewer from the previous two rooms.  It is not essential for the narrative, rather it is important to break up the scenes between the bedroom and TV room with the Toy room (which is the next post).  The room itself has the floating melody of Vera Lynn who sings a World War II song that was popular during truly the time of obedience.  From the Nazi guard at Belsen to the soldier storming the beaches of Normandy.  Abraham ehoes all of these things.