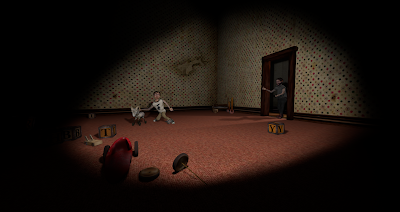 The next scene is of Isaac playing in his toy room with Abraham arriving to tell his son to come with him on a trip.  Before Abraham is about to speak though, Isaac blurts out something to his father that was on his mind.  I find children's insights into things quite pure and endearing so I wrote a little addition to the narrative which hopefully portrayed that a bit.  As Isaac plays with his toy ram on wheels, he ponders why its horns circle inward with their points safely hidden within the centre, almost as though it would prefer to suffer attacks upon itself rather than hurt another.  Its peaceful and docile nature making it the perfect sacrifice.  I also wanted to show perhaps a hint of how Abraham might see God.  A God who is not simply gentle and caring, but one which possesses the sharp horns needed to fight off evil.  Isaac says to his father upon seeing him at the door.. 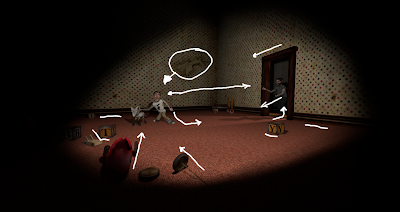 Isaac "Father?"
Abraham "Yes, my son?"
Isaac: "I love the ram, for its horns are curved in such a way that its points turn upon itself so as to not hurt others."


Abraham "Yet it is the sharp points of a bulls horn that keeps the herd safe from wolves. Come Isaac. Carry with you your wooden Ram for we go together to watch the stars upon a building" 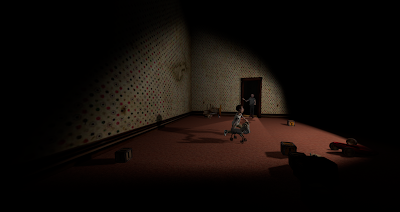 And with this they begin their journey to climb Moriah Towers, which I have changed from a
mountain to an apartment building.

The design of this scene and others are done so that the composition is strong regardless of where the viewer stands.  I have added some of the eyepath lines to show how they cycle the eye within 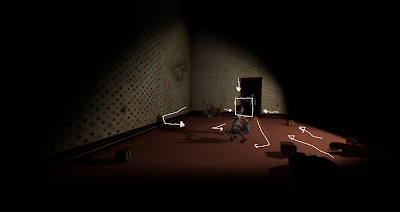 the composition from the main view that most take, but also with a side view.  You could also look from the top down or behind Abrahams head towards Isaac and the composition should still remain strong.  But that is the fun of a virtual space where the viewer has freedom to look from any number of angles, the composition now is no longer a fixed one such as in a painting, but requires more thought and creativity in this new environment.

So what we are looking at with the arrows are the way our eye subconsciously moves within the artwork.  It varies with different people and cultures but it works on most.  The high contrast within each scene creates a strong line between the darkness of the shadows and the lit areas.  Your eye follows along these dark and light borders and are cycled to the main characters reinforcing how they are interacting.   You will notice that the intention is to stop the eye from leaving the scene by rerouting it back to the main focal point endlessly.  The important part though is to make it subtle.  Too much manipulation can make it feel sterile, yet too little can confuse the viewer and make them lose interest quickly.. which then might prevent what you wish to say from being absorbed.  I circled the big wall stain because the eye is also drawn towards unique shapes/colours/lines etc.  You will notice that when you look at the top image your eye will pop over to the wall stain quite frequently as well as the two black spots on the wall.  Abraham even points to it.  It acts as a barrier which stops the eye who then moves down to the face of Isaac.  Oh and the box.  Forgot the box.  The box shows a mini composition which contains just the very high contrast of Isaacs white face against the black shadow behind the door.  This area is cycled within the door frame and Abrahams arm.  It essentially highlights just Isaacs face looking to Abraham his father.
Email Post
Labels: bryn oh contemporary art eyepath in a composition Gehorsam / Obedience for the Jewish Museum in Berlin jo ellsmere Jüdisches Museum in Berlin new media art peter greenaway saskia boddeke