The first room where the visitor arrives is a necessary evil.  I really dislike text in a build as it begins each experience by breaking the immersion. The viewer is forced to read technical directions on how to set up the windlight (sky or atmospheric effects), projector lighting and so on.  Ideally an immersive experience should begin upon arrival.  Immersion is a constant back and forth of various elements fighting against one another for dominance.  In real life you have all the peripheral stimulus outside the borders of your computer screen to break the immersion for you, such as bills on a table, the radio playing, a phone call or whatever.  In the virtual space we attempt to overcome this with focus capturing elements such as composition, narrative, sound, interaction and various other elements ranging from creating a sense of mystery or even anger or fear in the viewer.  But having said this, you have to rely on the viewer to make an effort to experience the artwork.  For example I was directed to a blog post by someone a while ago reviewing Lobby Cam.  In it they said they didn't feel like discovering the pages which told the story for the artwork, then they proceeded to review it.  I expect they then went to a concert, put in ear plugs, then reviewed that.  I should do reviews of reviews haha anyway.  But what I found interesting is they also wrote about reading some drama of two people arguing, and to her that was quite entertaining.  Let me show why that interested me. 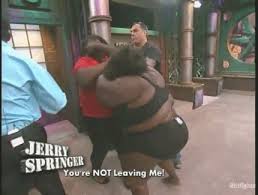 If you look at the various fairly current TV shows you will see that over time society has been changing as far as attention span goes.  Research into using forms of stimulus to maintain attention has become a huge focus.  So essentially what a show tries to do is pump out a powerful attention seeking effect every x amount of minutes or seconds to ensure the viewer does not change the channel to one of the hundreds of others available as competition.  Reality shows are quite powerful in that they are "real", or appear to be so.  Often they contain extreme emotions such as fighting and shouting, as in the ahead of its time Jerry springer show.   Or we see various judges criticising teens whose emotions are less guarded.   Simon Cowell, for example, was spellbinding and a hero to some due to his ruthless and often calculated and mean spirited attacks upon bright eyed talents who took a chance, even the bad ones, while millions sat at home snickering in an arm chair.  It is not us being mean, that is not on our conscience, we just get to witness it.  Then there is the stress stimulus of cooking competitions where the chef is an asshole as well, because you know, speed cooking on national TV is not stressful enough.  Dr Phil makes people cry each episode and you can even see him leaning forward as he strives to get the TV gold, then when they begin to weep his body language shows him lean back and relax with a very "mission accomplished" look to him.  There was a show I once saw called Cheaters which filmed people as they discovered their wife or husband cheating on them.  They would actually drive them to the motel to see it live so that the emotions would be particularly raw.  It is all emotional voyeurism which the viewer need not experience in their own life.  They just turn the TV off, yet have absorbed a fight or flight type of emotional experience which has injected them with adrenaline.  A type of addiction I expect.
What this all means to me is that Society seems to have changed into an instant gratification mentality where we have become desensitized by this battle for our attention.  Now it is a battle of extreme stimulus between competitors, and as such we likely will never see a Bob Ross joy of painting paced program for quite a while if ever again.  I don't think it is necessarily because people wouldn't watch it, but rather because the networks probably wouldn't take a chance on it after determining the road to success was extreme stimulus.  These can also be seen as extreme immersion shows as well. 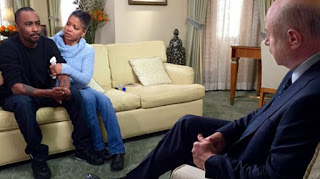 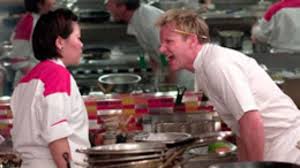 I have gotten a little bit ranty here, but what I mean to say is that, while TV, and now Cinema, is an established massive battleground with sophisticated research into these philosophies of viewer retention or perhaps mental captivity, the virtual space is still new and unspoiled, yet simple principles of immersion need to be contemplated and perfected.  We can't control all nor should we attempt to, but it is important to be aware and find the balance.
Linden Lab should provide a specifically designed immersive viewer which has nothing but perhaps a chat bar.  You shouldn't be able to get into the inventory or teleport away, you can't see your AO and once windlight settings are set they can't be altered.  With the Museum show these things had to be done with RLV because the guest, possibly a child, who sits down at the PG museum computer must not be able to teleport away to an adult sim or take off all their clothes etc.  A dedicated viewer such as this would not only allow me to set up an experience for the Museum to use immediately without the technical barriers (they must do the settings on the host computer themselves as currently and I can not save them remotely from my computer) but it would also allow us to bypass the immersion breaking issues that SL currently possesses.  With the advent of the Occulus Rift, the quest for highly immersive environments will become more sophisticated and the platform with the least amount of barriers may be adopted.  I was planning on doing a post on the composition of the build but I got side tracked, so that will start with the next post.  I didn't actually get past my dislike of text.. sigh.

Bryn Oh said…
The build took four months to create. It began with writing the story and then the build itself was composed around the narrative. The way the build works is for the viewer to be emotionally influenced by the narrative which then slowly changes the mood and understanding of the environment. There was a great deal of work put into it and without the narrative it is simply an environment (which is fine but not what I intended). I have no problem with people not following the narrative, but if someone comes to do a "review" of the artwork then the most basic thing to do is to actually try to experience it the way the artist meant it to be seen. If you have no intention of doing that then don't review it. The review was meant to influence her readers perception of my work and it was done in a lazy fashion. Your analogy is incorrect in that a concert is not composed around the program notes nor is ones understanding of the music greatly affected by those notes.
June 8, 2015 at 8:31 AM