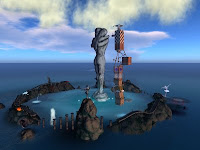 To fly or not to fly. I built the Tower with the intention of it being shown in an environment without fly turned on. The visitor would enter at the bottom and see the mob. They would move forward and find the poem in the pram and discover there was a story in this build. As they climb the tower they find more poems to further flush out the story until eventually they reach the top and see how the story ends for this installment. Well except for the stand by which tells another portion of her memories. I came to Black Swan to see how it was going and discovered fly was back on and people were flying directly to the top of the tower. Goodbye story.. goodbye challenge goodbye Immersiva. How can one become immersed if they are able to hover around apart from the build? an observer. I can understand RAR perhaps being concerned that people would find it frustrating. But then again.. how can sims succeed? What is the strategy to bring people back? I mean that is the basic business problem in SL. Have a initial draw of people and then watch the tumbleweeds bounce by. It seems to me that something that challenges for an extended period of time is what you want. Be that with hidden aspects.. stories or just the donkey kong factor. Making something easy for people only satisfies the extremely busy and the lazy. While it is unfortunate for the busy people (who could use the ctrl alt....thingy) I really don't care about the lazy ones. If you want to create something memorable then don't try and make it appeal to everyone as that will just water it down to spam. I am going to go yell at RAR again.
Email Post

Anonymous said…
You'll be pleased to know that not everyone flew to the top.. The saving grace is the mob looking at the entrance, clearly directing you to go inside, then its pretty clear what you have to do..

Now I may have a nice pair of wings.. but I swear I didnt use them even when the damn steel balls came tumbling down..

Wondeful Puzzle for the shop by the way, and the reward of sensibly priced items for sale was quite unexpected
November 27, 2008 at 4:33 AM