Over the next several posts I will be doing a walk through for my new artwork "Hand".  If you have not seen it yet then don't read these as they will contain the entire story and explanations of my thought process and design elements.   This first post will just be the arrival room where you set up the windlight and so on.  I am also going to explain a few useful building tricks. 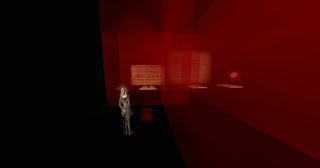 as it was designed.  First things first though.  In the picture to the right I have turned on transparencies so you can see invisible things.  You do that by holding down ctrl and alt at once then clicking T while still holding down the ctrl and alt.  Anything invisible in a scene can now be detected as a red semi transparent object.  The red in this picture shows two layers of walls.  In each wall is a Hud (a display that appears on your screen like a window)  and you will be asked to join an experience.  If you have already joined the Bryn Oh experience from previous builds you wont be asked to do so again.  This just applies to new people to my work.  When you walk through the wall the Hud will be added to you automatically if you have accepted the experience.  The experience essentially removes the step of people having to go to a kiosk and buying a hud when they then attach to their avatar.  This experience bypasses that and directly attaches a Hud to you. 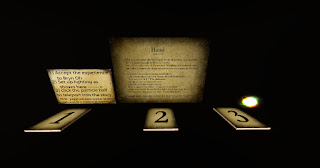 There are two walls because if the sim is busy and people are quickly walking through the first wall it can sometimes miss people, so the second wall is a backup to catch those it may have missed.  Now you walk up to some directions on the wall.  Directions are a necessary evil in my work.  I hate directions and I imagine so does everyone else.  That will be the nice thing with Sansar as things just appear as you plan them with no messing around.  Anyway, these directions are quite simple compared to how things used to be several years ago.  When people came to my work then they would have to set up the windlight manually with pages of numbers to insert... if you are on Firestorm viewer the windlight will just appear for you.  The windlight is important as the shadows themselves are part of the composition of the artwork.  The contrasting line between a dark shadow and the light will often help direct the visitor to important narrative elements.  As an artist I would naturally like the visitor to see the work as I designed it, however I realize that people like to change the windlight and take pictures for flickr, so these are directions for a windlight whose shadows enhance the overall composition of the work.   Same goes for ambient sound.  If you are listening to music then you will miss the ambient sound which heightens the immersion.

The picture to the right shows two boxes that sit inside a wall.  It is a confusing picture because it is a bit tricky to show that.  So what I have done is angled the camera so that it breaks through a solid wall to show the two boxes with text on them.  People can not see these boxes normally.  Why put boxes with text on them behind walls you ask?  A good trick to help with rezzing textures or text is to introduce those textures before people come to them.  So when you arrive and are setting up the directions for the windlight your viewer is seeing these text boxes even though you are unaware of them.  The text on the box is the text that appear in the hud at different times in the story.  So you are taking these textures into your computers "cache" and then at a later time when the text appears they will appear instantly with no blurring to rez.  The next trick is to use the same concept for sound.  What I do is put the ambient sounds I will use within the build playing in the arrival room with the sound set to 0.  So you wont hear them playing but your computer will.  So for example in the Singularity of Kumiko where there was lots of voice narrative, all of it was silently playing in the arrival room so that when you got to a long portion of dialogue it played smoothly the first time.  If I had not done this then the first time you would hear the voice talking it would be broken and jerky with large portions silent.  This happens the first time as your computer puts it into cache.. and then if you listened a second time it would sound much better... but who listens a second time?  Best to avoid making people do that.  This trick also works if you were to say make an animated sculpty.  I once made a plastic bag caught in a tree that was blowing vigorously in a wind.  You do that by making one sculpty with a bag shape, then make a second sculpty with different bag shape and so on until you have maybe eight shapes to cycle between.  There is a script that will cycle between sculpty textures and thus create the impression of movement.  Putting the sculpty textures out for people to rez will prevent the bag from getting all warped the first time they see it.  Sadly this only works with sculpties and not mesh as far as I know.  Ah yes I forgot to mention, I also use windlights for different altitudes.  So for example on one floor of the apartment building the windows are boarded up... so when you climb into these rooms the windlight changes from the sunlight one to a very dark one to give the impression of a gloomy dark floor.  I do the same with the subway where you arrive.  It is very dark down there but when you walk up the escalator to the city the windlight changes by altitude so that it turns to the sun.  This gives the feeling of coming out of a dark place to a lit one.  This again only works with Firestorm and provided you don't change the windlight from the original.  Once you change the windight it seems to stop this feature from working.   Anyway I think I am done for the first part.  For the next posts I will just talk about the story itself.
Email Post