When you come up from the dark and damp subway you emerge to a warm city basking in a sunset.  To your left is a familiar character if you experienced Imogen and the pigeons and The Singularity of Kumiko works previous to this one.       She is a Vera Lynnbot.  This particular one was hired to sing to Kumiko as she lay in her coma.  Their programming was designed to entertain humans and that was their sole purpose.  When the population began to disappear they would wander around looking for people to sing to.  At the start of the Imogen and the pigeons story we were shown the Vera Lynnbot standing and singing beside the last remaining computer which housed the digital memories of Imogen.  Imogens memories were the last remnant of the human race, and as such it was where she stayed.
Across the street from the Subway is the Rebirth Store.  One of the themes for the overall narrative, which began almost ten years ago with the Daughter of Gears, is the concept of the Technological Singularity.  The idea behind the singularity is that an AI is created with a type of intelligence.  But the thing is that even if it begins with a basic intelligence it has the ability to grow at an exponential rate.  So for example.  Imagine a competition.  A group of the top 20 scientists in the world against a basic AI with little experience.  The contest is to build a spaceship that can fly to another galaxy with people on board.  They have one year before the results are due from each group.  The top scientists get to work and each have a lifetime of study behind them they are the top experts in this field... the AI has no experience.  So the AI creates a virtual environment that matches real life.  Same physics etc.  It begins to learn the same things the scientists studied and puts the virtual space on say 10x the speed of real life, like putting a movie on fast forward,  and the AI need not sleep.  Long story short the AI can catch up and surpass the top scientists fairly quickly in the test virtual space.  Not to mention it also keeps upgrading itself and the virtual space too.  Maybe it can increase the speed to 100x real life?  To 1000?  So at the end of the year it has spent hundreds of years in study to build the space ship.  Its design is far superior the top minds of just a year ago, in fact it makes their design seem like a childs in comparison.
In my stories the Singularity has arrived and essentially people have left the singularity AI to run everything.  "All we need to do is play" said Iktomi to Kumiko.  Since it learns exponentially the AI comes up with remarkable inventions daily.  One such invention allows us to record our lives and mind digitally onto a computer to later be put into a new body, essentially creating immortality (which in my story is not invented yet).  So the Rebirth store collects lives and keeps them for the day when we can install these memories into new bodies.  Since the memories are stored digitally as a language 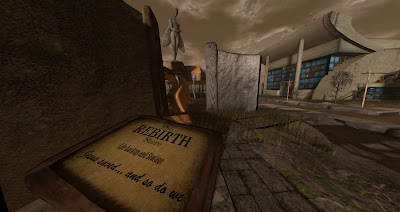 they can now be "edited", and Imogen and the pigeons as well as the Singularity of Kumiko show two different views on whether ones memories should be edited and changed.  Imogen lost her daughter and in her story she edits her memories to change that outcome and bring her daughter back to her.  In the Singularity of Kumiko .. Kumiko is in a virtual space within her real life coma after a car accident, and has to decide if she wishes to have her memories recorded.  She feels that a life shouldn't be edited and that emotions like happiness can only exist when they have sadness
to compare with.  For her views please watch the Singularity of Kumiko machinima.  The Singularity of Kumiko is a prequel to Imogen and the pigeons with Kumiko being the daughter that Imogen lost.  Kumiko is lost because she decides not to record her life digitally and to stay in her coma where some unexpected things happened.  She dies in her coma and so cant be reborn.
So we see a decaying city but we don't yet know why.   When wandering around the ground level 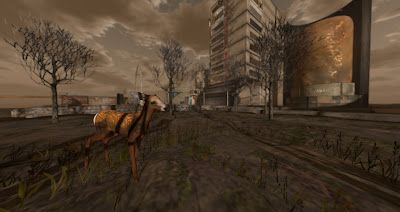 you might come across  deer returning to the city or little relics of a time that is now fading away. 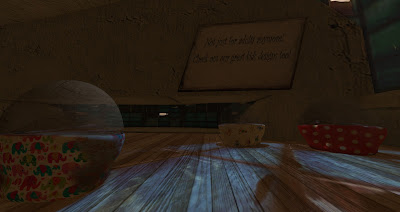 Across the street from the Rebirth Store is a new theme to the story world I have created.  It is called PodWorld and it sells virtual reality pods for people to live in.  At this time people have begun to live, love and work within the virtual space.  Originally those who lived and worked in the VR were known as "sleepers" in a derogatory fashion, but as time progressed almost everyone began to live in pods.  I imagined a type of evolution where the human race didn't evolve any longer physically with their bodies, but rather the mind moved forward on its own.  Our bodies became place holders and our mind lived the perfect existence in the virtual space where we looked as we wished to, where our intellect had the might of the Internet behind it, where, essentially, people built their own Heaven.  Society no longer needed a house and furniture, entertainment systems and all that added expense... they just needed a pod to house their bodies in sleep.  They then had the choice to purchase food canisters of different duration so they need not be bothered to log out of this world.  Some bought ten year food canisters, while others 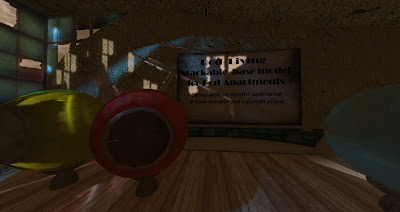 got five or the basic package was one year.  In this story the world fell apart 8 years previous and so only those who purchased a ten year food canister are still alive in their virtual spaces.  The rest perished when their food and water ran out, oblivious to the collapse of their previous world.
This is the world you enter when you come out with Flutter from the Subway.  It is a story which requires the visitor to piece together clues to build an understanding of the society, and for those who are familiar with my previous work, they will add new layers to what they already know.   In the next post we will begin progress into Flutters story.
Email Post