The Singularity of Kumiko letters 7-9 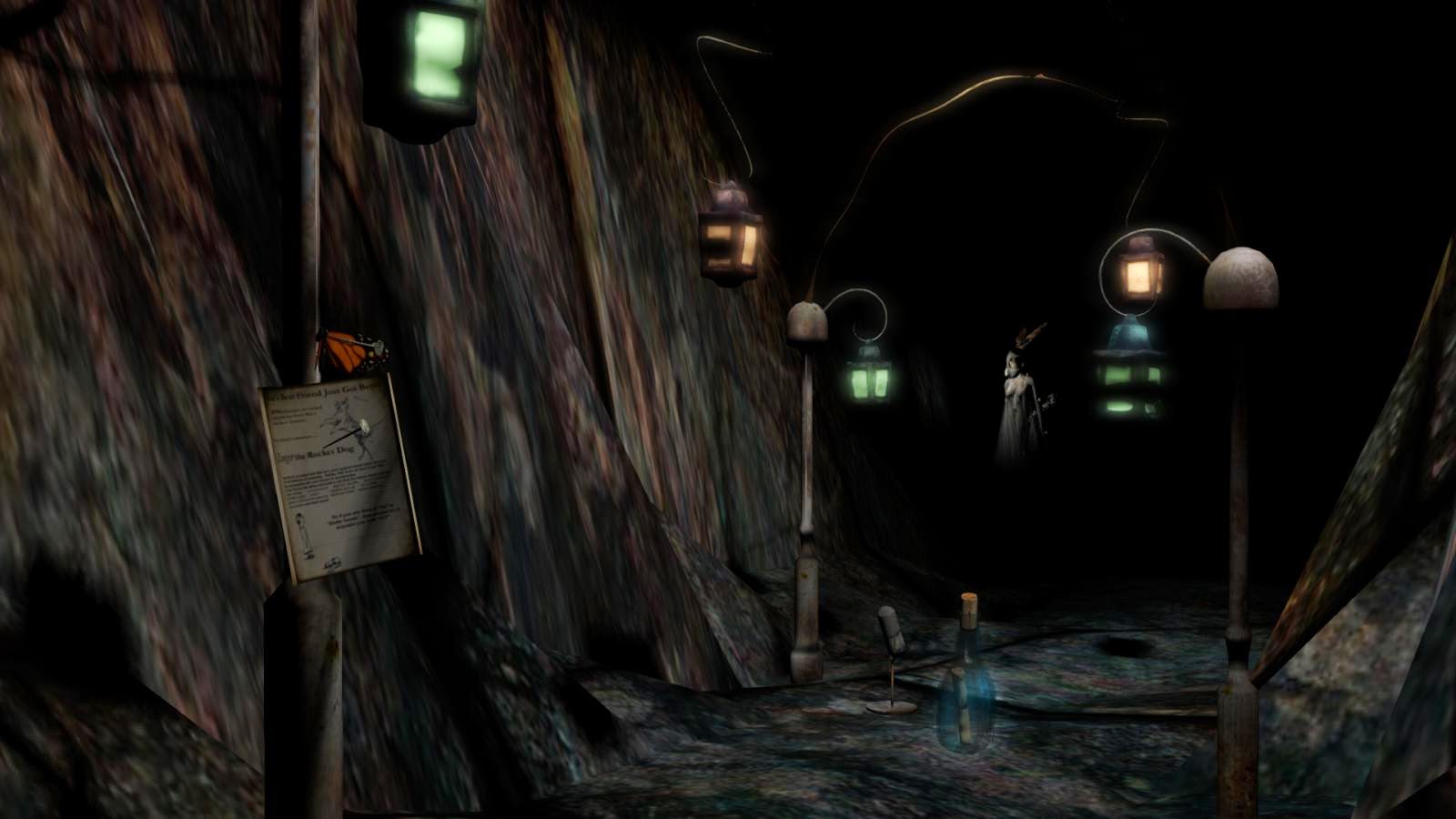 Day seven
Dear Iktomi:
Ah you know me so well, yet no I truly wouldn't want to live forever.
You cannot be excited and in love forever.  You cannot be fascinated by someone for eternity.
All must fade to grey with endless time.  If we lived for eternity together Iktomi, then we would eventually part.  We must don't you see?  It would be preordained.

I think eternity is the saddest word.

We all would eventually be alone, broken hearts unwilling to start anew yet lingering in a half-light between life and death embracing neither.

I went out walking today looking for your door, Mr Zippers at my side.  I feel comfortable here and I harbour a guilt for being pleased at not finding your exit yet.  It is a dark and foreboding place yet it feels a part of me somehow.  I will have a look again tomorrow.

P.S.  I think I saw Scruff far off in the woods searching for me, I called but then he was gone.

To Kumiko the idea of living forever is akin to a joke repeated endlessly until it becomes meaningless and bland, or perhaps a lilac tree forever in bloom, rather than the few weeks in which we cherish its scent.  Eternity, to her, is not a goal to strive for but instead something destructive which would, in its reality rather than mirage, extend existence but dull its vitality.

Today I explored the basement.
Do you remember Rabbits?  The Rabbits before the genetic games and manipulations that eventually destroyed them.
Did you know it was their age old enemy the Fox that inadvertently caused their downfall?  It's true.  You see Foxes suddenly began to die out beyond what was natural for them.   For centuries they would follow a cycle.  One year the Rabbits would be plentiful, and then as a result, for the next few years the Foxes would have lots of Rabbits to eat and they would grow in numbers.  They would then reduce the Rabbit population where eventually it would result in many Foxes starving over the winter.  The death of the Foxes would then allow for a resurgence of Rabbits and so on and so on.
Well one year the Foxes began to die out quite rapidly.  They blamed it on everything from Wind Turbines to toxins in their environment, though nobody really knew why.  In our wisdom we genetically tinkered with the Rabbit species so that they became even more fertile, yet once they passed their prim mating age they would rapidly gain weight while their right hind leg would wither and twist.  Essentially creating a fat crippled dinner easy for the Fox to catch. 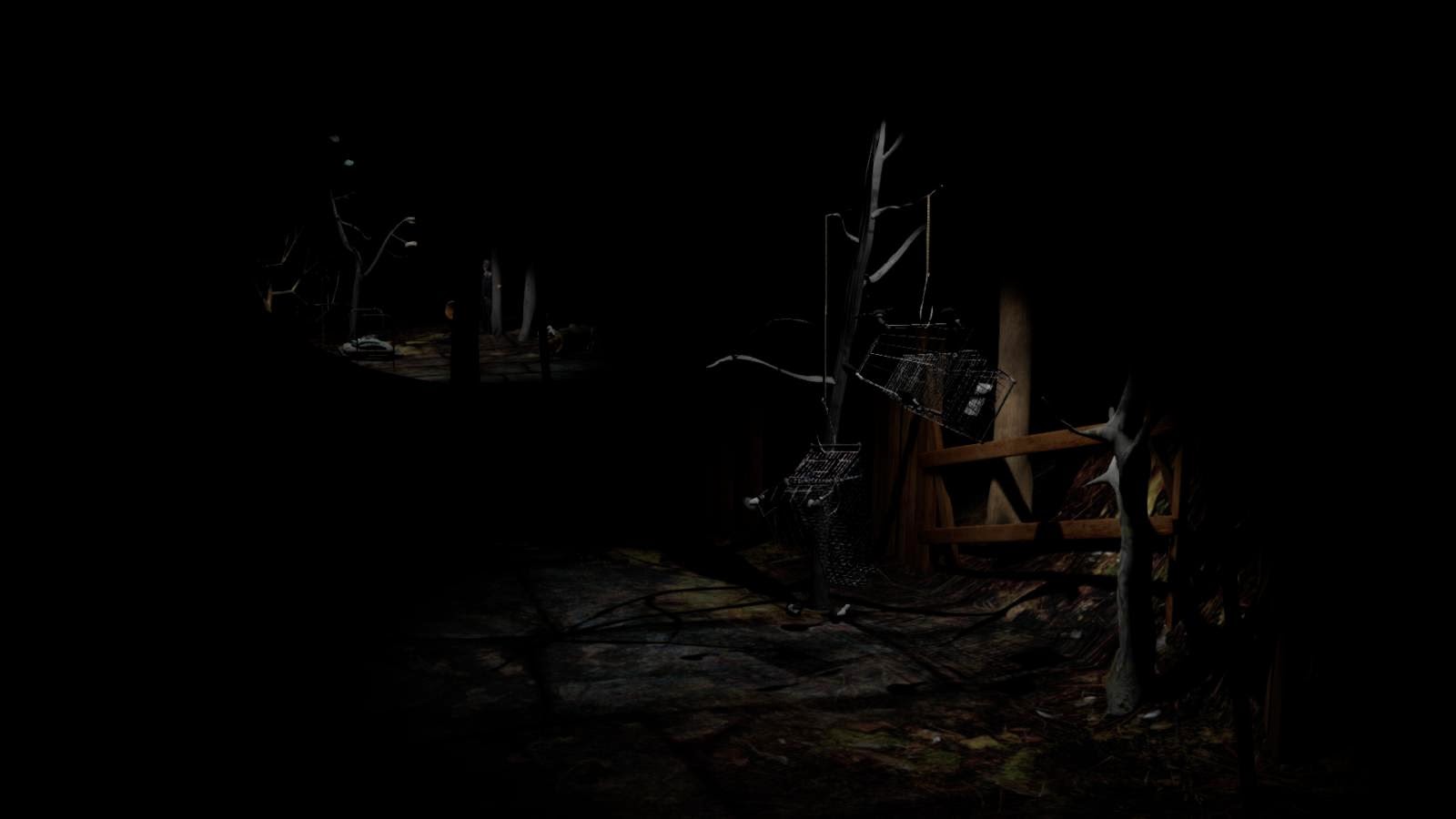 Everyone clapped themselves on the back, yet the Foxes still died.  To prevent the food chain from collapsing they build a RoboFox to wander around killing Rabbits to keep their numbers down.  If only they stuck to Rabbits as they were programmed to do.
The fast breeding meaty Rabbit became the darling of the food industry and soon their genes spread far and wide across the world.  Then for reasons still being debated, they became sterile and, within a shockingly short time, the Rabbits were no more.

Today in the basement I found Rabbits.
Real living Rabbits. 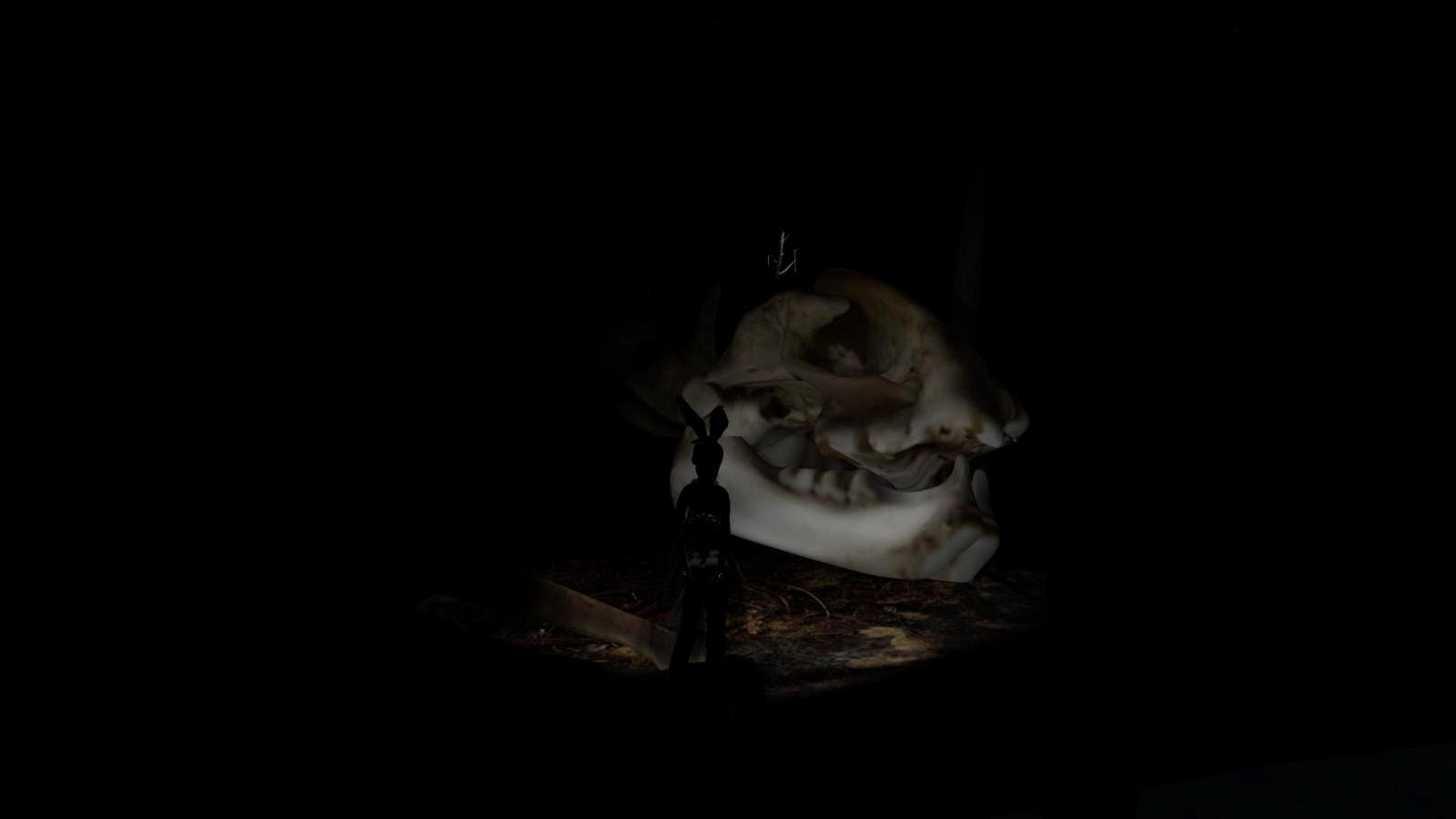 There was an illegal gene circus Man/Rabbit hybrid making shadow puppets on the wall while little ones watched.  I sat with them a while and petted a pretty brown one who climbed on my lap.

This land I am lost in is dark... yet magical.

P.S Iktomi why does my Mother not write to me also?

This letter from Kumiko expands a bit more the world from which she lives in.  A world where science has the ability to play God but lacks the foresight to determine what effects tinkering with nature will have upon them.  Its all parallel to us though.  For example in British Columbia, (and many other places in the world, but I will pick on my own Country) we breed farmed Salmon which  creates large, fast maturing aggressive salmon. These genetically similar fish dominate the native wild salmon for food, habitat, and mates.  However, the strength of wild salmon is they have, over a long time, evolved into many genetically distinct types, specially adapted to particular geographic regions. So if the farm bred Salmon escaped from their pens into the ocean then they would out compete the native variety, yet remain genetically inferior but physically dominant.  It is believed they would endanger the long-term survival not only of wild salmon, but also of other genetically related fish such as trout.  So likely we keep these farmed Salmon in ponds deep inland away from water right?  Oh God no! we put them in mesh pens directly in the Ocean and millions have already escaped during violent storms.  How greedy and stupid.  Hmm what else?  Oh the Honeybees are actually disappearing and nobody really knows why.. some think it is a class of pesticide called neonicotinoids which is used for crops, but others believe its a cocktail of pesticides.  For Kumiko she finds herself in a dark world yet finding the Rabbits and the Honeybees to her eclipses the material world that the door with the red exit sign promises to return her to.

Day nine
Dear Kumiko
I fear asking this knowing how stubborn you are, but please stay away from the basement.  I don't know how it is that Rabbits came there, but once something is gone it does not come back Kumiko.  Scruff is dead and the Rabbits are extinct.  To imagine otherwise is not good for you.

Kumiko your mother can not write you right now as she is unwell.  She was never strong in her mind and body and circumstances have been too much for her and she has...  withdrawn.  Imogen loves you very much Kumiko, but she needs you to come back, we need you to come home.
Love Iktomi 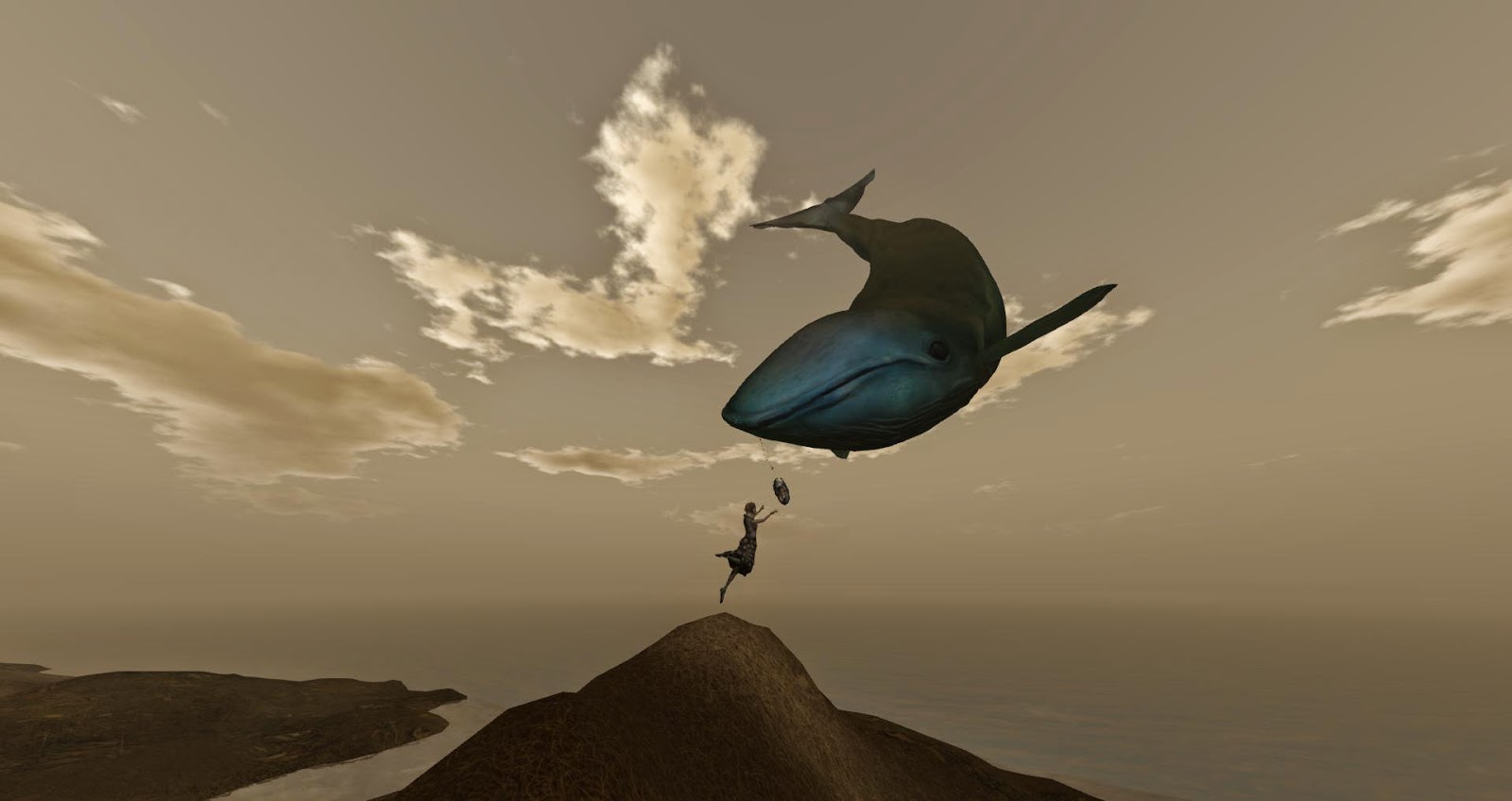 In the letter by Iktomi we see his concern for the appearance of things such as the Rabbits and Scruff, rather than the planned ones such as Mr Zippers whose appearance they seem to control.  He also, for the first time, says her mothers name.  Imogen.  It is at this point that we realize Kumiko is Imogens daughter and this story is a prequel.  It now also illuminates who the child was that was delivered to Imogen from the whale (on the cover of Kumikos book which Imogen kept to remember her by)  at the end of the story Imogen and the pigeons.  The question is now, which is right?  Kumikos view on not altering ones memories? or do we look at Imogen and how she edited her own memories and events as stored in the machine, overcoming them to bring back her lost daughter Kumiko and the great joy that brought her. The chance to begin again with her priceless daughter whose loss ushered her into the asylum.  The ironic twist that the editing of memories which Kumiko rejects is the thing which brings love and joy to her mother.  Now we wonder how Kumiko was lost and where she now resides.
Email Post
Labels: bryn oh contemporary art imogen and the pigeons memory encryption singularity of Kumiko technological singularity virtual art