Some of my favorite non representational artworks in Second Life are created by Oberon Onmurra.  I see his work under the light of a few different movements in art.  Not fully under one, but with elements of different schools of thought.  I filmed the video above as though it were a work of Seprematism. 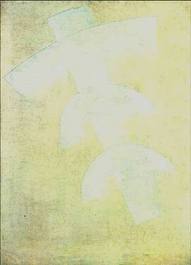 The idea behind Seprematism was that everything we see in the physical world is meaningless, with significance only coming with feeling.  The Suprematists often worked only with very basic geometric shapes like cubes and cylinders, because they felt that by picking the form of the square, they had chosen a shape not found in nature nor the traditional painting of that time.  The square symbolized something greater than our world of appearances.  They would, in some cases, work white over white as seen in these paintings done by Kazimir Malevich in 1927 or so.  The idea being that they were purified form and colour.  You can also see echoes of             De Stijl and Elementarism in Oberons creations as well.  If you look at Oberons work in the video, you will see that it is almost exclusively made up of cubes.  The most basic of shapes in Second Life.  Each of these cubes is given life by the use of scripting. 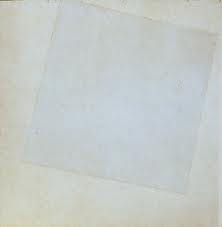 The scripting is their animator, their soul, it is what allows for them to gain the feeling or emotion which is sought by Suprematism.  I have actually made the video with more and different emotion than Seprematism would have liked, but I wanted to show that the space was malleable to interpretation.  It is how I see the space.

Even the chairs are collections of basic cubes combined to create the object.  The particles streaming from the cubes that rise to the sky or from the flying creatures also are of a fairly minimal nature in the world of particles.  His work Coriolis, can be seen either  from the emotional manner by which I filmed the video, to that of a rigid impersonal landscape, with the coldness of a computer land.  The viewer imparts their emotions onto the minimal landscape.  The fact that it is minimal, I believe, allows one to project onto it with greater ease. Its not exactly a blank canvas to work on, but it has areas of space for us to fill in.
I really enjoy Oberons approach to art creation in Second Life.  His juxtaposition of the chaotic movement and engulfment of his cubes on the viewer, to his quiet empty areas of reflection. These elements are what drew me to this work in particular.  Its simplicity of form and the way it allows for the viewer to project their feelings onto its surroundings are one of the features which stood out for me over a year of viewing various art exhibits.

Oberon Onmura said…
Thanks for the nice mention, Bryn. I never thought of a connection with Suprematism ... if I could handle simple colors and forms like Malevich, I'd be rich! But I do consciously harken back to the days of American minimalism for their sense of order and precision. In fact, I used to work at Dia Art Foundation which has the world's greatest collection of all my favorite artists. :-)
March 16, 2011 at 5:59 PM