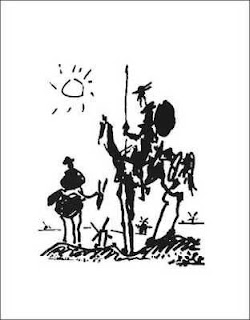 There are many great avatars within second life. My favorite is Ub Yifu's
version of Pablo Picasso's drawing on the literary character Don Quixote. What attracts me is the interpretation I make to Ub Yifu walking around as Don Quixote within second life. Don Quixote was a character in a book by Cervantes. He was a middle aged man who read stories of chivalry and believed every word. A man obsessed with an earlier time who slowly sank into insanity.
In the book Don Quixote went to an inn which he thought was a castle and was knighted by the innkeeper in order to get rid of the insane old man. Him and his squire Sancho Panza went
forth having adventures that mainly occurred due to Don Quixote's madness. A classic one was
him fighting windmills in the belief that they were in fact giants. Don Quixote was eventually brought back to his rural farm to his niece, housekeeper, priest and barber. They secretly burned all his books on chivalry and eventually convinced him he was not a knight. Don Quixote became sane again and fell into a deep melancholy. He lost his will to live and as he lay dying they attempted to convince him he was Don Quixote again in order to save his life. They failed and Don Quixote died both sad and sane.
Ub Yifu goes through second life and creates traditional works of art (as far as sl art can be called traditional) done by the masters of an earlier time. Many of his sculptures are recreations of these masterpieces. Around him is the art of texture rotation, glowing spheres and fancy doodads. But he sticks to the art he loves and cherishes, creating wonderful artwork.
His avatar gives life to a two dimentional drawing and creatively questions how we percieve ourselves within the frontiers of a virtual world.