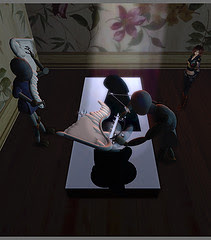 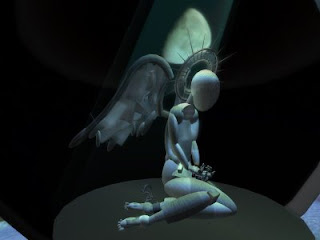 Recently I exhibited a build at Burning Man's Second Life presence called Burning Life. I was one of 12 juried artists with some of my favorites such as AM Radio and Sabine Stonebender, but also discovered some new greats such as Blotto Epsilon and Dizzy Banjo.
I was given my space a few months before it opened and began thinking up ideas. I thought of current things going on in Canada. We have in Alberta some oil sands. Essentially its very destructive to harvest the oil from the sands.. kills wildlife and destroys habitat not to mention being generally bad for the planet. However, we have a lifestyle we are unwilling to give up and as such this is part of what we need to maintain it. While I was contemplating this I began to wonder what our boundaries are. Not Canada but the human race. What might make us stop and think and decide the outcome was not worth the resources we might get?
So I thought perhaps if we found a way to Heaven. A physical Heaven. Here is the poem the build is based on.

The war is done the condos rise
What resources are there to consume?
Cassiel appears with tears in his eyes
At the window to my bedroom

The build took the form of a store in Heaven that sold angel accessories such as wings and halos. The viewer came in and found a man and his boy choosing wings. The boy points shyly to one he likes while the shopkeeper looks on. Above the store is a captured angel shackled and used as decoration. The shop itself is built to represent what we might build to mimic heaven. Nice blue glass and sleek silver tables. Mood lighting and an almost art deco entrance. Its important for the shopper to enjoy their shopping experience and not think too deeply where these wings and halos actually come from. You see they are one of a kinds, the originals. You can buy Gabriels wings or Metatrons Halo. Both status symbols and personal accessories. As with all my builds there are plenty of little hidden things for those who know my work and know to look very closely. And eventually those same people find a secret door. The secret door leads to the surgery room where they are in the process of removing an angels wings for the store. I won't go into detail about everything in the build but the NPIRL link I added helps. This build existed for one week but wait! it might be coming back.. DB Bailey has said there is an idea afloat for a sim showcasing "Classic" builds and so if you missed it at Burning Life then its possible you can see it there when it opens. I will leave a note if and when it opens.
Email Post