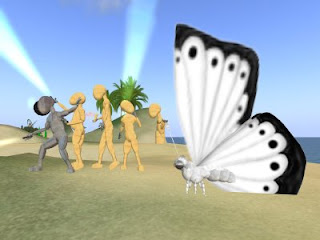 I built and built but discovered that nobody really liked me very much as a big white moth. The reason for this? Well I think its because people come into second life and try to project real life values onto our avatars. If your avatar has a lip ring then they use this as a clue to define your real life personality. Its a natural human tendency to search for clues on how to define someone. Watch someones eyes on the subway and you will see them constantly moving over other people figuring them out. So I created Bryn Oh. Bryn Oh has a bit of Emily the Strange in her with a touch of that little kid from the Addams family. She makes Steampunk art and is generally a sandbox hermit. I will talk more about her and my reasons for being in second life in the future and I probably should put up images of my artwork in second life as well.
Email Post
Labels: Me

Semaj said…
Like a gosling, your world was my first “here it is” moment of SL, the imprinted mother of inspiration and discovery. This world, your builds, movies, stories, poems, creatures, hospitality, are al facets of a collective mother force of sorts that I will never forget. People at work, family and friends etc. are a little incredulous at my persistent ramblings about these new frontiers. The initial fervor has subsided somewhat but this place, yours and others, leave frequent traces, thought tags, idea streams, and reveries in waking ruminations as much as they do in dream. I am slowly leaving the nest of Immersvia, as more discoveries await, yet for now your artistry is still the most thoughtful and compelling work I’ve seen, including the work of your fellow artist from the initiative.

Your world is immense in minuscule and monumental wonders that grow ripe in both heart and mind. The transcendent majesty of art, of the imagination, of creation, has always managed to shake us free from the rigorous and stupefying dogmas of daily physical existence. The so called “real” world, in which our understanding in most typical waking (rather should I say sleeping) moments, is but the slightest glimmer of the blazing eye of god. That is often the irony of art (movies, books, paintings, immersive virtual worlds) that they awaken emotional centers and pathways that allow us to more fully embrace, rejoice, cry, and laugh in our real world body-earth bound sojourn. Your creation has reawakened my sensitivity to the CREATION.

Being but a babe in the hinterlands of the grid, it didn’t take long to surmise that for many this worlds possibilities are merely reflective, one cult of cookie cutter personality replaced for another, but since falling here in this amazing land of abandoned machines, exquisite nano-bugs, mannequin soul-mates, rare Rabbicorns, poignant stories, and one spectacularly outfitted deity (that being your “ghost” or “goddess” artist), the scent of your imagination has borne me, set me afloat as a spore on the wind, the lure of the earth and the brilliance of the stars awakens me, alive again with mystery and hope in the transformative possibilities of expression and communion.
March 20, 2009 at 10:53 PM