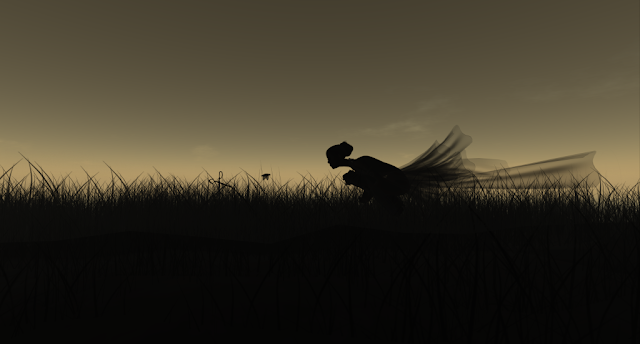 This is the third print I am making available for Christmas season.   It is from a build called "Scissors" which I never actually exhibited, I just filmed the narrative in a machinima/movie which I will embed below should you like to see it.    The story is of the girl who is cutting endless paper soldiers outside at a table, then a storm rolls in.  A flash of lightning startles her resulting in the dropping of the scissors.  They twirl falling to pierce the earth almost in the shape of a cross.  An Emperor moth comes to land upon the scissors looking down upon the insects around it, and from there the other insects look up at the mysterious scissors made of metals and plastics so seemingly foreign and magical to their world of sand and grasses.  They begin to worship the symbol and the moth upon it.  The Ants and wasps vie for position and begin fighting among themselves as the storm worsens.  The girl watches the events unfolding and in horror retrieves her lost scissors while eradicating the damage it caused.

No I am not against rational religion, it is the blind obeying that alarms me.

The Giclee prints are on Hahnemuehle cotton Photo Rag paper.  They are museum quality prints and rated with a 200+ years of fade resistance.  If you are interested in purchasing one send me an email for details brynohhh@gmail.com