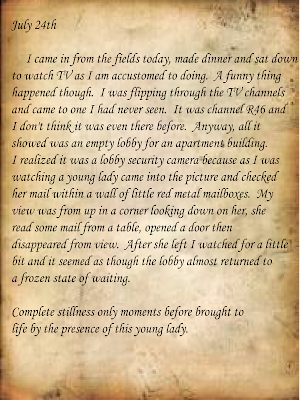 The viewer walks into a field of wheat that blows around them sometimes vigorously while others quiet and gentle.  It feels almost like a sea undulating and pulsing with a high contrast to the viewer standing still and the old rusted truck in the field.  One of the themes I like to work with is the idea of technological triumphs in the human race being forgotten, decaying with nature slowly and inexorably reclaiming them then incorporatating those objects into its own environment.  The previous use or function of our achievements being forgotten.   The old rusted truck is one such object.  To the birds it is just a convenient island in the sea of wheat to land upon.  One such bird enjoying the view from the open door is a red winged blackbird.  Throughout the build are field recordings of this bird which you can hear mixed with the drone of crickets and the wind.  What I wanted to do was create an immersive environment which would also work well with my occulus rift which I have been testing.  When I stand in the field with the virtual reality headset on then it really does become a rather charming immersive space.   Sadly I am a bit too far ahead testing this new technology as so few have the headset yet, and Lobby Cam will be deleted before the headsets arrive over the next several months. 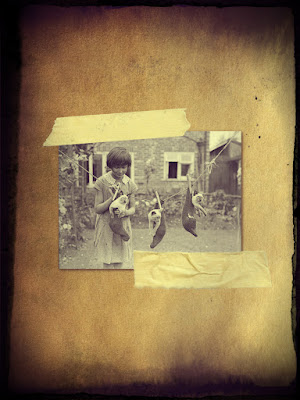 After walking a bit the visitor will find a new diary entry.  I built this work so that it didn't matter what order you found the pages on the sim they would always reveal the next page in the diary.  The pages themselves blow around randomly but always stay within a fairly small radius so they can be found in general areas.   The next page is for July 24th.


I came in from the fields today, made dinner and sat down to watch TV as I am accustomed to doing.  A funny thing happened though.  I was flipping through the TV channels and came to one I had never seen.  It was channel R46 and I don't think it was even there before.  Anyway, all it showed was an empty lobby for an apartment building.  I realized it was a lobby security camera because as I was watching a young lady came into the picture and checked her mail within a wall of little red metal mailboxes.  My view was from up in a corner looking down on her, she read some mail from a table, opened a door then disappeared from view.  After she left I watched for a little bit and it seemed as though the lobby almost returned to a frozen state of waiting.

Complete stillness only moments before brought to life by the presence of this young lady.

The unnamed author of these diary entries is a toy maker and his diary contains little images he collects of things which inspire him or reflect his current state of mind in regards to the diary entries they accompany.   The next entry. 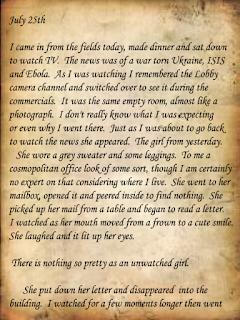 
I came in from the fields today, made dinner and sat down to watch TV.  The news was of a war torn Ukraine, ISIS and Ebola.  As I was watching I remembered the Lobby camera channel and switched over to see it during the commercials.  It was the same empty room, almost like a photograph.  I don't really know what I was expecting or even why I went there.  Just as I was about to go back to watch the news she appeared.  The girl from yesterday.  She wore a grey sweater and some leggings.  To me a cosmopolitan office look of some sort, though I am certainly no expert on that considering where I live.  She went to her mailbox, opened it and peered inside to find nothing.  She picked up her mail from a table and began to read a letter.  I watched as her mouth moved from a frown to a cute smile.  She laughed and it lit up her eyes.

There is nothing so pretty as an unwatched girl.

She put down her letter and disappeared  into the building. 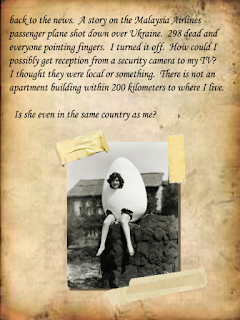 I watched for a few moments longer then went back to the news.  A story on the Malaysia Airlines passenger plane shot down over Ukraine.  298 dead and everyone pointing fingers.  I turned it off.  How could I possibly get reception from a security camera to my TV?  I thought they were local or something.  There is not an apartment building within 200 kilometers to where I live.

Is she even in the same country as me?