Today I just walked my fields with my mind preoccupied by the feeling that I had seen a clue
yesterday.   Something I couldn't quite put my finger on.
I was full of ennui so I came in and put on the lobby cam.   I watched the room again, feeling as though there was something before me that I was missing.  As though I didn’t have the city eyes required to see a clue that my rural upbringing missed.  Suddenly
the postman came into view.  It's funny but everything
seems “sudden” with a security camera. Hours of stillness
broken by a few minutes of movement.  The postman
rooted around in his mailbag and then began filling the
mailboxes with the detritus of life.  Feeding their little
mouths bills, advertising, promotions and then the letters.
That dying breed of communication. 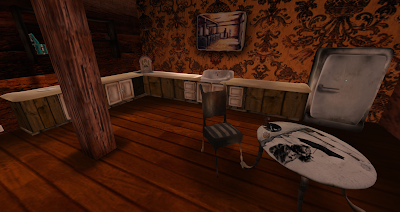 He passed by Ferns box without opening it, as he so
often seems to do, then finally places a letter upon the
table and leaves.

I watch the room for too long.

The toy maker continues his daily routine then later, at dinner, he watches Ferns routine.  He imagines that there is something, a clue of some sort hidden, which could be revealed if only he saw through the eyes of a more experienced person. 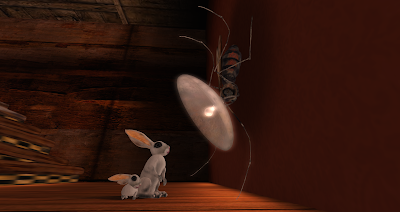 When I built his home I tried to imagine what a toy maker might paint.  I decided that he would have a soft spot for star wars dolls and so his paintings were action figures put together in funny little combinations like still lifes.  I had lots of fun painting these.  They have titles like "I am pooped.. Darth choked me so many times today!" showing a stack of stormtroopers exhausted on the floor.  Or there is one of Chewbacca and Dark Vader wrestling and a little concerned guy saying "Hey guys stop it! come on stop it!".  Another shows all those monsters from the Cantina meeting after work and saying "you guys want to go to the cantina tonight?"  Because, you know, even on other planets well into the future Friday nights can still have limited boring options. 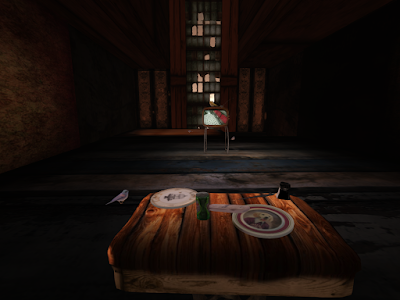 What is wrong with me?  I sit waiting to catch a glimpse of a woman who doesn't know I exist nor ever will.  I feel as though she is my friend, I feel protective of her and jealous of a possible lover.  It's insane.  It's embarrassingly stupid of me.  I have never really felt my loneliness though I have sensed it, but now, suddenly I wish nothing more than to talk to Fern.  To tell her... to tell her what?  That I watch her on a security camera from thousands of kilometers away?  that she has become the joy in my day and that my greatest fear is my TV will realize it's impossible to pick up a signal from a building so far away, that one day I will turn on the TV to find the channel gone as though it had never existed.
What I am doing it must be unhealthy mustn't it?  Am I that creep from a horror movie but I just don't realize it?  As I wrote this my eyes blurred then cleared  as a tear was born.  I am ashamed of myself, a grown man weeping.  Tomorrow I must take down the satellite dish.

In the August 10th diary entry we learn something important about the toy maker.  We realize that he is aware and embarrassed that he is stuck in a sort of addiction.  His words might echo the thoughts of the guest reading this story, and where we may have been thinking "Come on guy get it together" he voices this so we are left, hopefully, imagining that if someone who thinks the same as we might also be acting the same as we would in a similar circumstance.  Can you then imagine yourself coming to act in this way if put in the same circumstances?  This naturally requires us to look within ourselves with an honest eye and imagine what seclusion and loneliness might bring out in us from the nooks and crannies we don't know exist or keep hidden.
In Toronto I often feel like I am in a bustling city teaming with people.. but alone.  I rarely speak to those on the subway or streets, and to be honest I often don't even register other people around me as the city is too big to bump into friends, and so if I don't expect to see anyone I know then those around me are fleeting people who, in moments, will likely disappear never to be seen again.   So why invest time into someone you will never see again?  That is the sad slowly seeping mentality of those who live in the city for too long.  That is where Fern is at and she is as remote and lonely in her own way as the toy maker.   He thinks he can see this in her, but he also knows it is ridiculous to imagine that he in any way knows this person from simply seeing her for minutes silently reading letters each day.  His rational mind is telling him that he is being irrational, and that the satellite dish must come down for him to reclaim his life before discovering the lobby camera channel.  So even though his odd routine brings him happiness, he knows that society would disapprove and so he must willingly go back to a sadder state in life.   Is he a creep or is he perhaps a decent man in a difficult situation?