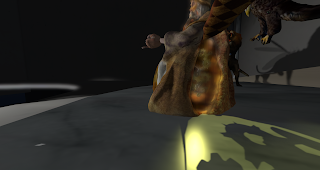 Did I say final scene last post?  Ok well I meant final scene for those who didn't find the final hidden scene.  I tend to hide things in my work and this had a few hidden bits including a scene that takes 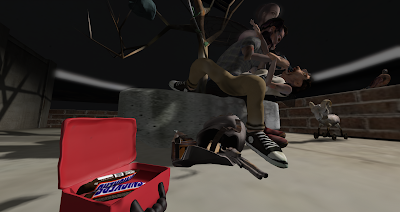 place after God, satisfied with Abraham's faith in him,  has stopped Abraham from killing his son.  In my mind I imagined what the moments immediately after those chaotic and traumatic events might have been like.  I don't know if Isaac could see the Angel who stopped his father from killing him, and I am not sure also if he could hear God telling Abraham to stop at the last moment.  I sincerely hope he could.  Was Gods voice in Abraham's mind alone or was Isaac able to hear?  If Isaac could see the Angel and hear Gods voice then it would perhaps ease the trauma slightly, maybe, but if not.. well.. if not then Isaac would have been forcibly wrestled to submission, had his father place a gun in his mouth and press the trigger only to have it not fire.  Then his fathers eyes might have misted over as God spoke to him, but then what?  I suppose 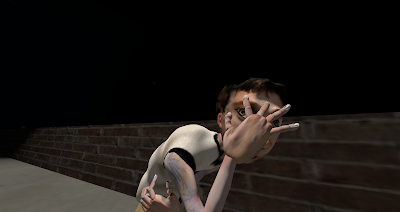 Abraham eventually would have come back to his senses and looked down upon his terrified son, then try to console him, to explain to him that voices told him to, that God told him to do this terrible deed.  The final scene is reached by clicking on and opening up a lunch box with a picture of VR Troopers upon it.  Inside the lunch box are two Snickers chocolate bars which Isaac secretly packed for himself and his father in an excited state, knowing they were going on an adventure together.  The Snickers bars teleported the viewer to a scene where Gods attention has now, satisfied, withdrawn to contemplate other matters elsewhere.  The 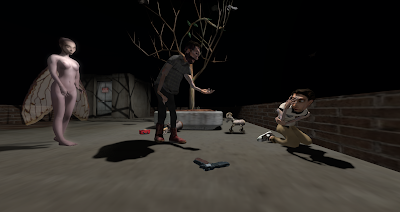 scene shows Isaac cowering against the wall, fingers covering his eyes as he peeks through in terror seemingly at his own Father, yet he may actually be looking past his father at the Angel who stands behind him, to Isaac perhaps something even greater to be feared.   The Angel has stayed and seems unsure whether to console Isaac or, in another form of Obedience, simply leave now that God has departed.  I wondered how the Angel might feel being a tool in such a test.  Abraham holds out his hand to his son, slowly approaching him as though to a frightened puppy.  He must now try to mend or rebuild his relationship with Isaac if that is even possible.  He may understand that he witnessed the end of innocence in his son, whose eyes will likely now, and forever, look upon 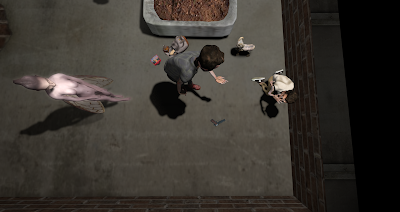 his Father in a whole different way.  The love and innocence now tempered with distrust. Those beautiful years of child naivete wrenched away suddenly never to return.   It is telling that God, an immortal, said to Abraham "I will surely bless you and make your descendants as numerous as the stars in the sky and as the sand on the seashore. Your descendants will take possession of the cities of their enemies, and through your offspring all nations on earth will be blessed, because you have obeyed me."  It is a great reward no doubt.  A reward that someone who lives forever would expect to be appreciated, even by a mortal with a finite lifespan.  However, had it been me, I would take the love of a child well before that.
I am aware that religious scholars have studied the passage for ages upon ages and feel that there are many messages within the narrative that are somewhat obscure for the casual reader.  For example some say that God is really telling the masses to stop having human sacrifices which, at the time, were apparently not uncommon.  I think it may have been more effective if God had simply stated "I command thee to not sacrifice humans or thee shall go to hell"  But what do I know?  The population at the time were far less sophisticated than we are today, most could not read and learned much of their fear of God and Hell through pictures which were the universal language.  Simply look at a Bosch painting and you can imagine the fear it invoked.  Knowing this I think that perhaps subtle innuendo is not the best method. 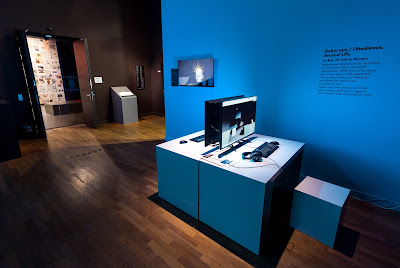 Now I don't mean this next part to be critical of a scholarly essay on virtual art I read recently.  It was well written and I always want to support people writing about this medium.  But having said that one part got me thinking on lasting interpretations.  The authors said in regards to my work The Singularity of Kumiko (a series of posts explaining the build here)  "Apart from obvious references to the film Donnie Darko, Bryn Oh brings to this narrative stories and characters from previous projects".  I read this and was a bit surprised because I have not seen the movie Donnie Darko, yet it was thought to be something I had made obvious reference to.  Now I don't mind that this was said as people are free to interpret my work as they wish.  I have heard many different interpretations of my various creations, some accurate while others are quite different, but to me it is important that people can use their own creativity when looking at my work.. I don't want to force a single perspective on the viewer as that removes a part of the interaction which I feel needs to be present within an artwork.  So while inaccurate, I don't mind that the statement was made.  I read some essays on Donnie Darko and while I don't really see the connection it does sound quite fascinating, and you can read some views on it here.
My point in bringing this up is as an example of how a works meaning can be adjusted and perhaps remembered in ways other than intended. My artwork probably wont be remembered for  very long, but lets pretend it is and stays around long after I am dead.  Now lets say that this essay is used by others to infer meaning on what I have created, what were my intentions and inspirations etc yet I am no longer around to ask for confirmation.  Someone may repeat in a subsequent essay "obvious references to the film Donnie Darko" and add to that their own perspective accepting that statement as being true.  Another may read the second essay and then other essays created even later, all believing and accepting that Donnie Darko was an inspiration to Bryn Oh's work The Singularity of Kumiko.  It would be incorrect, yet over time generally accepted and a new truth created.  Now none of this will happen and I am merely using it as a loose example of how I imagine the narrative between Abraham and Isaac to have been altered, misunderstood or just over analyzed.  For example, I just don't believe the idea that God's intention was to stop human sacrifice in this manner.  I believe that religious scholars have over analyzed the passages written so long ago, because, if we take the story at face value, then it's a pretty questionable one if left on its own.  It reflects the views of the author at the time.  The basic message is that if you follow God, trust in him no matter what, then you will be rewarded.  Did they have child psychologists back then? no.  Did they cherish their children the same way we do today?  I am not sure, but even a hundred years ago children were thought to be just small adults, my father was an orphan and tells me stories that are very much like Oliver Twist.  Stories of beatings for wetting a bed and harsh treatment for things he simply did as a normal child.  He was 5 years old and his sister was sent to a separate orphanage.  Things change and perhaps we try to adjust stories such as that of Abraham and Isaac to fit in with our current morals and beliefs because this treatment of Abraham and Isaac just doesn't work in our current moral environment.  Well I shouldn't be so general, the world and its cultures are far too broad.  In my Canadian society anyway.  We can willfully adjust the story to suggest that its more subtle and layered than it appears.. but is it really?  Is it ok to say that God might have made a mistake in this instance?  If its not ok then that's when we find excuses maybe.  The old testament was revised into the new testament.  Which should be adhered to though?  which is correct?  Here are a few changes or contradictions within the Bible. 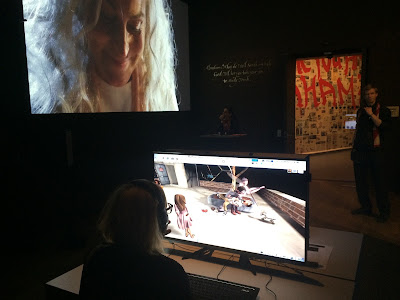 There are many such instances and William Henry Burr published anonymously in 1859 his collection of the Self-Contradictions of the Bible.  So in the end, I am taking the story of Abraham and Isaac and changing the perspective to look at the human relationship between a father and son and obedience to a higher power.  To me it is no longer about religion but rather about Governments their decisions, blind obedience and how it affects the common person.  Much like the examples shown above, I too am adjusting the narrative.   This ends my posts on the virtual portion of Obedience shown at the Jüdisches Museum in Berlin.  I would like to thank Saskia Boddeke and Peter Greenaway for trusting in myself  to create what I hope was a narrative that was more than a simple retelling of a Biblical story.  That perhaps it created a dialogue for others to debate within.  I would also like to thank Jo Ellsmere for creating such a wonderful depiction of the 24 elders.
Email Post
Labels: abraham and isaac bryn oh contemporary art Gehorsam / Obedience for the Jewish Museum in Berlin immersive 3d environments jo ellsmere new media art peter greenaway saskia boddeke