Each year at this time, I try to find a Monarch butterfly caterpillar.  The best way to do that is to go to a field of milkweed plants and look for any showing signs of half eaten leaves.  Milkweeds are the plants with those invasion of the body snatcher pods that eventually get all crispy dry and let off their floating seeds.  In the picture to the left you can see how they got their name, the little bit of "milk" that is leaking out of it.    When I was a kid we used to dare each other to lick that milk for some reason, and let me just tell you that it tastes pretty terrible.  I expect after eating this plant for a while the caterpillars also would taste horrible to their predators, so its probably somewhat of a deterrent as well.
This year it has been pretty hard to find any monarch caterpillars for some reason, but I did manage to find one who I have named "Chompy".  My friend just informed me that I always name things by what they do.  For example Barky the dog, Stabby the Wasp, Bitey the Mosquito and so on.  Chompy was vigorously eating a leaf last I looked at him, much like how people eat corn on the cob, anyway I stand by the name Chompy.    In a few days he should turn into a Pupa and then in a week or so he should emerge as a lovely butterfly.  Here is a film I made of one from a while ago which I was able to film and post on Flickr.  His name was Lego btw so not sure what my friend is talking about.  He sat on my finger and I was able to capture him on film just as he flew off, that was exciting. 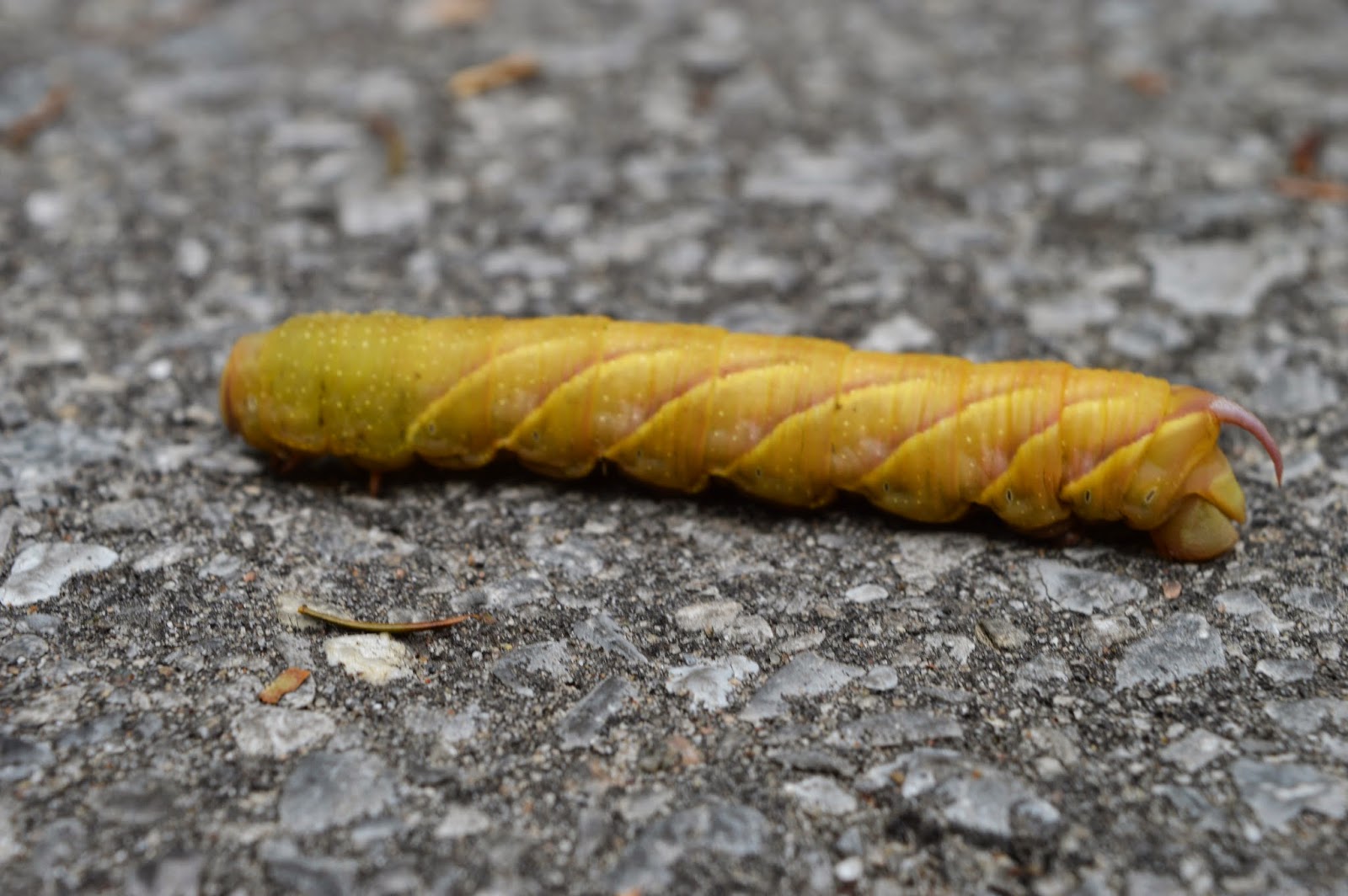 Later the same day I saw what I thought was a little fabric pom pom on a leaf, but when I looked closer it was this thing on the right.  I have no idea what it is, but it is now also resting in a mason jar and I will let you know if it does anything interesting.
So wow finding two interesting things in one day you say.. well actually I went to Presqu'ile provincial park today as well and as I was hiking this massive caterpillar began crossing the road.  He was going remarkably fast and when I tried to help him cross the street (didn't want him to get squished) he got all vigorous and wiggly, not to mention he had what appears to be a spike on his bum.  Anyway, I like my caterpillars slow and docile so I left this one alone to his unnaturally rapid walking.  I did get this picture though.  I am not sure but I think he is a Horn worm.

Dividni Shostakovich said…
Putting this post together with your previous one, I think all your fans should send you a bug in a box.
September 1, 2014 at 3:45 PM

Mos Kingsley said…
Thanks for a very entertaining read! Nice picture of Chompy too. I once encountered a frantically running caterpillar (kind unknown to me). It was like he knew he was crossing the road. Just his bad luck that I noticed him too late to help and the one car that passed on the quiet road ran right over him. :( Need to pay better attention next time. And the pile-o-wtf is probably a gall from some cousin of the wool sower wasp. At least I think so. Keep on writing! Best regards from Europe.
Mos Kingsley
September 1, 2014 at 5:20 PM

Bryn Oh said…
I agree Dividni! just no bugs from Australia please as they all seem to be extra bitey or poisonous. Wasps would be ok Mos, never saw a baby one before, I am just hoping it wont be a thousand little spiders that all fit through the holes in the plastic wrap on the top!