Imogen and Kumiko - The adverts

All my stories, from Condos in Heaven, The Rabbicorn, Anna's Many Murders and others to The Singularity of Kumiko all reside within the same narrative world.  In order to help create a unifying mood or explanation of this worlds society, I decided to narrate through its advertising.   For I believe you can really get a sense of a society by how it interprets its own people.  Many despise some forms of advertising and its insulting, shallow attempts to manipulate us, but then, there are many more who unwittingly shape their lives around it.

One of the things I dislike is guilt advertising.  And not always in traditional forms of print but other methods such as, well.. for example here in Canada,  when you go to buy groceries or perhaps some other retail shop they often ask you, as you are about to pay, whether you would like to donate a $1 to feed children somewhere or to save abused animals and so on.  All things you would love to do.  If you say "no sorry I won't give a mere $1 to feed starving children" then well .. you are one evil mofo.  You can feel the judgement of the shoppers in line behind you with their squinty little eyes even if its just in your imagination.    So you give a dollar and then at the very next shopping stop someone wants you to donate $2 to stop a fucking Comet hurtling toward the Earth and you are like.. grrrr there better be a Comet!.. no wait.. I hope there isn't a comet.. no .. i don't know what I want but I probably should pay!

Anyway,  so what I wanted to do was create the advertising in a light hearted manner touching on some of these methods used, yet not preaching.  The underlying messages in some of the advertising is really not so humourous when it depicts the mentality of a society no too far removed from our own.  They can be a bit dark, but also mixed with humour.

So I will quickly explain a few starting at the top and moving down.

Auntie Ethel's Strawberry* Milkshakes:
The love angle, if you don't love Auntie Ethel's milkshakes then you don't really love your own aunt.   The "Strawberry" comes with a disclaimer symbol * which has a massive list of ingredients that create the taste of Strawberries without actually using any.  This is a real list of ingredients for an existing milkshake, I didn't make that part up.

Pink Elly's Mood enhancers are anti-depressants paired with, and requiring, Television channels to trigger them.  They imply that those people who help you with your problems also pick them for themselves.  They must be OK then.  They actually used to have Doctors do that for old smoking adverts in magazines I have collected.

Retelevise is geared towards the idea of putting ones one desires to the forefront of life, and in this case using a 16 week program whose aim is to addict your child to the television thus freeing up your time to enjoy yourself.  I have literally waved my hand across the eyes of my brothers kids when watching Dora the Explorer with almost no effect on their hypnotic state.

In many of my adverts I have created a company called Slinks which provides a variety of these services.  This next one is the Slinks Breathing Accessory or also known as a gas mask.  They took the angle of taking a very disagreeable and scary requirement of going outside, and attempting to make it fashionable.  If the gas mask is needed due to a toxic environment or due to the possibility of a terrorist attack and so on, they don't want you to associate fear with the product.  So rather lets try and make it more like a purse or something fun.  Lets not make people think about the depressing reasons why they are needed, but rather camouflage the necessity into something they actually want to have with them.

Test Monkey # 4683 is kind of a silly one.  I once read the infinite monkey theorem which states that a monkey hitting keys at random on a typewriter keyboard for an infinite amount of time will eventually type a given text, such as the complete works of Charles Dickens or the Bible.  It plays on things like them claiming they knew TEST MONKEY #4683 was special .. yet despite this they didn't give him a proper name.  Essentially they had an idea that didn't come to fruition so they are attempting to recoup at least a bit of cost.  They creatively use large print at the bottom to suggest the New York Post liked the book whereas the small print accompanying it clarifies that the quote was actually for a different book altogether.   You should be able to click on these images to see them larger if the text is hard to read.

Zinger the Rocket Dog:   Zinger is a character whose story I have almost made a dozen times already only to push it back with each new build.  Zinger is an actual character who first popped up years ago in my artwork Condos in Heaven.  Mr Zippers (the murderous rabbit) is also a power pet.  The idea for Power Pets is that Slinks have found a way to "improve" the common pet surgically with technological advancements.  They have decided that the best way to market their product is by convincing people that normal animals, like a dog or fish are pretty predictable and lame pets.  PowerPets are instead super pets and claim to surpass previous incarnations like the Rabbicorn.

Also in this advert I mention "Scientypes" who often appear in these write ups.  I have always been a bit remiss in explaining my idea for what a Scientype is.  They are pseudo professionals.  People who pose for pictures in lab coats or by microscopes looking intent and intelligent yet are in fact actors.  A Scientype is a type of Scientist whose unofficial role is to reassure the public into thinking a product is supported and tested by a rather handsome and reliable professional.  It plays on the idea that if someone wears a lab coat in a picture then they must really be a Doctor or Scientist.  Slinks can't legally call them scientists so they made up a new word which was "Scientypes" and the population believes that they are a type of scientist rather than actors.  The idea being that any claims made by Scientypes are opinions masquerading as truths and should the unfortunate event of a lawsuit occur in regards to a product that Slinks offers, then they need only point out that their Scientypes make no claim of being professionals, it is in fact the public who have erringly assumed them to be authorities on the safety of the products offered.

The next invention is the Slinks Shelterball.  In this advert they take on the voice of a hip regular person who makes the case that they would prefer to be blown outside of a nuclear radiation zone by the explosion itself than be stuck in a bomb shelter inside the toxic area.  The Shelterball will only be demonstrated to work or not work in the advent of our worlds nuclear destruction, in which case they likely need not worry about their money back guarantee. DuraDent Tooth Spray plays on the parents desire not to have to deal with tantrums and melt downs associated with depriving their children of those addictive things they love, which also happen to be terrible for them.  So for this they have a product which coats a child's teeth in a protective layer that prevents them from getting cavities from Soda Pop drinks.  So it bypasses the need for self restraint and ignores the other issues like filling up you kid with sugar and caffeine.  They are solely focused on cavities.  They also encourage you to believe your children will love you more should you use this product.  They also deflect the desire to know what Tar-O-Plast is made from. 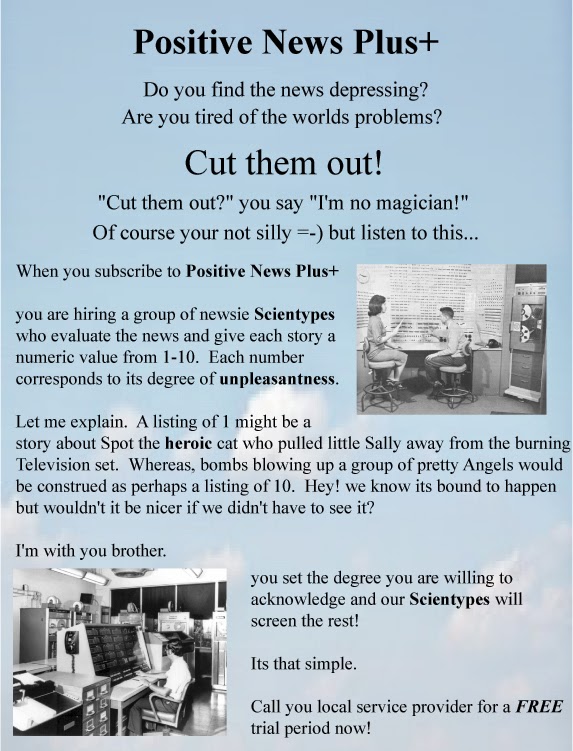 Clone Star Body Banks keep an actual genetically enhanced clone of you at a location which can be harvested should you ever fall ill and require an organ or blood transfusion etc.  They actually encourage you to live extravagantly by smoking or whatever, because you now have spare parts.  They don't want you to sympathize with the clones nor even humanize them to any great extent, so they assure you that these clones are having a wonderful time waiting to be harvested.  They claim that your clone lives in a virtual paradise, mingling with the clones of Celebrities and such on an island called Partyville.  The small print does correct this though by stating the clones actually reside in vats, and that Partyville is a fictional location known internally as Clone Garden 46134A.

Positive News Plus+
Positive news plus is a feature you can subscribe to which filters your daily media into news stories which can be more digestible than reality.  So your news feed can be all cat and puppy videos if you like or alternately a close representation of the state of the world.  I vaguely remember  being a young child and watching on the TV the bombing of Baghdad.  It was dubbed "Shock and awe" I seem to recall.  It was very confusing to me at the time as the commentators treated it almost as a spectacle similar to watching a fireworks show rather than the reality of it being a real time depiction of death and destruction.  I think there was actual footage taken from cameras mounted on precision bombs showing their approach and ending in static.   It was very much desensitizing something that really shouldn't be glossed over.  If a decision is made to destroy men, women, children, kittens, architecture and so on of another society, whether right or wrong, then the full implications of that decision should be shown accurately to its people so it is never misconstrued what the decision actually did.  When attempting to destroy an enemy then the elected officials naturally don't want you to associate with them on an emotional level to the extent that we contemplate that they also have adorable children, laughter and cats and dogs identical to our own. Seeing this on TV was what germinated the idea for Positive News Plus+ so long ago and to be honest the advent of instant, worldwide visual media which we have bombarding us daily may hasten this type of filter rather than prevent it.  But then again perhaps it will desensitize us to the extent its not required to filter.  Hard to say.  The next post will be on the Singularity of Kumiko.