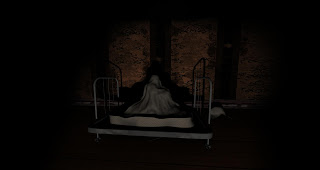 One of the challenges for a virtual artist is to find ways to produce an income.  For example, as a painter people will purchase physical paintings from me to hang in their home or at their business.  Those painting could potentially last  500 years if taken care of properly, then passed from generation to generation.  They know that they possess something tangible.  A sculptor is similar.. you can touch their work and sense the weight of the bronze.  There is substance, texture and mass.  Now I am sure most of you have explained buying something in a virtual world to someone who has never been to one.   You can almost see the wheels turning as they try to grasp the concept of owning something that they feel doesn't really exist.   "Virtual artwork you say? and whats this about a virtual condominum? pish posh!" I kind of imagine a Hugh Grant accent to go along with that but anyway.  So these people will then pay to go see a movie in a theatre, or go to a live concert which also, once the final notes fade, almost ceases to exist.  They reside now only as a memory.  It was the experience or pleasure that was purchased and they leave holding nothing physical.  It is just a mindset really and hopefully it is about to change for new media artists.  I recently had one of my artworks accepted to be sold on a website called s[edition] who state

"Sedition is a revolutionary new way to collect art by the world's leading contemporary artists in digital format.
Experience a whole new world of art and collecting."

.  My work will have an edition of just 100 to be purchased.  They represent some notable artists ranging from Yoko Ono to Damien Hirst. They will be of a very high resolution but it is more about supporting the concept I think.  This could perhaps be an important step for some artists, and to be honest it is much more accessible than a painting on a wall if the future has everyone with a device of some sort that keeps the digital artwork on person by smartphone, tablet or whatever is to come.  You can purchase the work of mine they selected by going to this link http://www.seditionart.com/bryn-oh/juniper-1.  Sadly their watermark covers the poem at the bottom of the machinima... which I have told them is an essential part of the work.. but as of yet are unable to move the text that covers it.  Grrr.  You can see the lower rez version below.

Vanessa Blaylock said…
They have a watermark on the preview version? Or on the purchased artwork??

For sure it's not my place to tell any artist how to earn or not earn a living. So the following thoughts are strictly for myself, not dogma that ought to be the way your or anyone else's art practice works.

For me the "Art Market" is more about "Market" and less about "Art." What I love about ephemeral art IS it's ephemeral nature.

When Art becomes "Content" for sale it becomes a commodity and loses at least some of it's spiritual nature. The excessive capitalism in a virtual world like Second Life has always disturbed me. Ideologically I'm much more comfortable in a world like OS Grid.

Artists do need to eat and pay rent, so of course there has to be an income model of some sort. For myself I like the university teaching model, but I do know others who find that approach problematic and believe that not being an academic and just selling objects is better.

Again, for myself, I'm not comfortable with the digital limited edition. When you print etchings from a metal plate, the plate itself physically wears down and you did have to stop printing at some point. Not true with photography. Even less true with digital works. So "limited edition" (for me) isn't about art at all, it's purely about market manipulation. It's about market created scarcity. It just seems to be so much about markets and calculation and perhaps there's still a little soul left at the end of all that.

Today the question is whether Internet art is any different? Will it fit neatly into the corporate structure of commodities traded as signifiers of wealth by the affluent? Or can Internet art truly resist these forces. Is it truly different? Is it truly transformative?

For myself, if New Media just wants to "run to daddy" to collect a check when the work gets popular, the it is "a" new media, but not a new vision of media. To reject the model of commodification that has plagued art, that would truly be new and transformative.
August 15, 2013 at 9:13 AM

Bryn Oh said…
The watermark is not on the purchased work.

Yes these are quite common arguments which I have heard often in regards to artists selling their work and to be honest it generally comes from artists with salaries in other jobs.

So in other words artists who don't have the same pressures on them to find income to pay rent, bills and to find food.

All your points are true about commodification and most are aware of it yet choose to support the artist financially anyway because they wish them to continue creating.

Juniper can be seen on youtube as well.. so why bother to purchase the same thing from Sedition? people do so because they feel a connection to the artist and wish to support them. Artists live in an almost obsolete lifestyle now which doesn't fit with modern society. They need to be creative to make ends meet.

Societies romantic notion of the artist is the artists greatest foe.

The best way for you to understand the other side Vanessa is to quit your job and see how long you can survive as a full time artist. And I don't mean for a month or two.. but for ten years constantly creating new concepts and ideas without going stale, all the while having no guaranteed income. Try that then see how you feel about sites like Sedition.

What if income from Sedition allows me to pay for six months more tier for Immersiva? is that not beneficial? Or should I stick to ideologies and close the sim all the while feeling proud of my stance on commodification? It is not always so easily distinguishable what is good and bad beyond the initial reaction.

And in regards to "When Art becomes Content for sale it becomes a commodity and loses at least some of it's spiritual nature." So yesterday Juniper was full of spiritualism yet today after being on Sedition it lost something? Your comments actually fit into Marshall McLuhans "The medium is the message" concept whereby you are judging the work from where you find it.

I think if that is the case with you then you are not looking at the artworks themselves. You shouldn't use a broad brush to compartmentalize thousands upon thousands of works without properly observing them, simply because you perceive them as a commodity based on their origin.

If an artist is intentionally creating for a market, almost assembly line, thus losing that spiritualism you speak of then yes that sucks. But you have eyes.. you look at the work, you can't just assume that. You can see on your own without having to decide preemptively that a work has lost something simply because there is a $ beside it. If you can only distinguish assembly line art from real artwork by whether it is commodified then you are not looking at the actual work in front of you but letting other factors cloud your vision.

Furthermore, if you are a professor as I am interpreting, then you should be preparing your students for the harsh realities that await them outside the comfortable confines of student life and student loans. The greatest complaint artists have for their professors is often how little they were prepared for real life, and while ideologies are nice they need to be mixed with realities which I hope you are also offering them.

I can't tell if my response seems harsh, but I don't intend it to be overly so. Hopefully it creates a alternate perspective.
August 15, 2013 at 12:03 PM

Scarp Godenot said…
I also feel the need to chime in regarding Vanessa's comments above. I myself am a professional artist and I hear these comments all the time that art should be 'above commerce'. That somehow it is the province only of the amateur or hobbyist. In my opinion this stems from the idea that since making art is enjoyable and rewarding as a process, that somehow it is wrong to make money from it as well.

Anyone who has been in the art world for very long will realize that selling artworks is NOT selling out. Making art costs money, and someone has to pay those costs.

It is very elitist, to require that artists work be done for free. In the history of art, it never has.

Art was paid for throughout history by either patronage or sales of the commodity of the artwork. Why should this be different now? I think that a lot of this type of idea comes from the art teachers and academics, who teach their students that purity requires that art is not tainted by mammon.

Ironically, they are the beneficiaries of patronage. Their patrons, (the schools and universities) require that they make art or lose their jobs. Don't forget that. They are also being paid to make art even if they don't sell much of the commodity.

So to sum up. Artists need two things: an audience and a living. This applies across all art forms from literature to music to painting or whatever....

The idea that a commodity is somehow not spiritual or tainted by lack of purity is ridiculous. Stewart Brand famously predicted '..information wants to be free' and we see the result of this in the internet. What is happenening today is that all creatives are under attack by those who believe their work is worthless, while at the same time wanting to experience it.