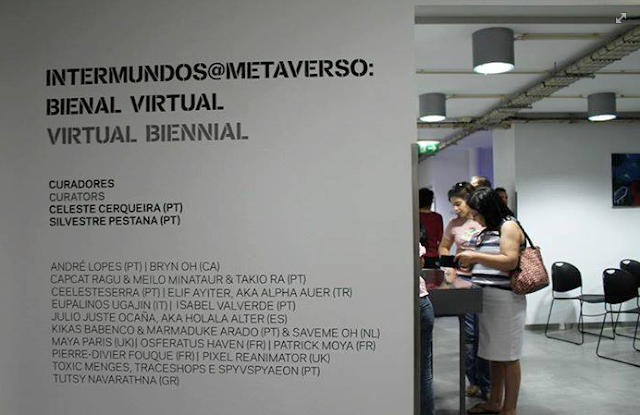 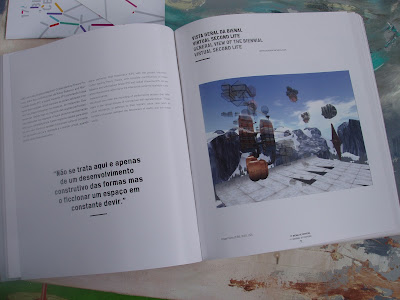 In the mail today I received the catalogue for the 17th Bienal de Cerveira which is currently running as a hybrid first life and virtual world exhibition.  I was surprised at how huge it is, 350 pages and full colour.  The Bienal is made up of artists from all over the world and many of the images show high quality traditional works in a variety of media.  So it was nice to see a large segment of the book devoted to virtual artists specifically those working in Second Life.  I have included the text below, there are also numerous pages of full colour images from each artist.


VIRTUAL BIENNIAL
The origin of this Biennial work is inscribed in the dynamic developed for avatars in the metaverso platform of Second Life. In this context, two types recognizable environments are emphasized: the environment and the work – as a virtual object. In the first case we have the artists’ proposals presented in the avatar Moya and Bryn Oh recreating their virtual autonomous spaces based on a fictional rhetoric. The first, buoyed by a growing complexity, submits the visitor avatar to a kind of second immersion (if we consider the platform of the Second Life immersive in itself) in a prefigured world created to generate a sensory- intensive experience that is acknowledged and activated by the avatar. If we deepen our level of attention, we can recognize in the virtual projects designed by the two artists as a spatial strategy of the creative process, unexpected reencounter with the concept of Merzbau proposed by Kurt Schwitters (/). It is not only a constructive development of forms but the fiction of space in a constant state of becoming. In the case of the universe proposed by the artist Patrick Moya with his Museu Moya, this dynamic creative flux expands to an increased reality in the sense that it hosts the works made in a virtual and automatic world. This dynamic proceeds in the direction of a kind of liquid flux that merges two converging realities. It is not just two parallel realities, but one only one that flows between the atom and the bit. 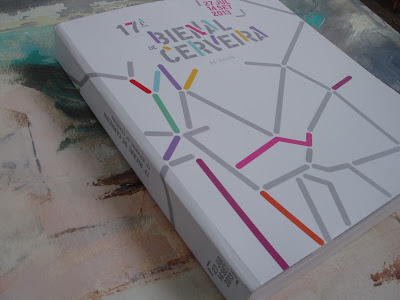 In the virtual work presented by the artist Bryn Oh (CA) we can find a distinct dynamic narrative in which the artist explores the sensorial sense of the avatar by presenting singular experiences to the viewer according to the path and environments created. Bryn Oh, besides exploring the mimetic representation of reality in terms of the rendering of forms (textures), also develops representationally complex spaces in which each level of access is like a dive into a fictional universe invoking the magical and fantasy universes explored extensively and recurrently in literary production.
Also proposed in the third space of the metaverso dedicated to Bienal Virtual SL (Angel Isles , , ) is a different reading made by exploring the sharing of experiences between artists/avatars. In the exhibition space dedicated to the Bienal Virtual, there is a range from the intensive singular readings developed by several avatars as in the surreal works proposed by the Italian artist Eupalinos Ugajin to the elaborate constructions of the Portuguese group Capcat Ragu & Meilo Minataur & Takio Ra that explore oneiric forms in space regulated by metrics such
“It is not only  a constructive development of forms but the fiction of space in a constant state of becoming.”
the virtual modulation. Both artists enhance the immersive aspect of the work by a mimetic process of intimate access which is valued and recurrent in the world of illustration. It’s about inhabiting the image.
In the remaining works, we acknowledge the dynamic achieved with different levels of experimentation through tools accessible in the metaverso such as the interaction with the work – avatar, valorization of movements of animated forms and an efficient synchronization between form, color and space. In this exhibition of metaverso, we detach the concepts of impermanence and fluidity as a media and metaphor of the constructed world in zero-graviy. We highlight in Bienal Virtual at the SIM Angel Isles, designed by the French architect Pierre-Divier Fouqué, the contributions of Julio Juste Ocaña, aka Holala Alter (ES), Elif Ayiter, aka Alpha Auer (TR), Osferatus Haven (FR) e Maya Paris (UK) e CEElesteSerra (PT).Also, in this space we have machinimas coordinated by André Lopes (PT) showing works on film made completely in virtual spaces which explore and enhance the potential of the narratives. In this section we can see the artworks of Tutsy NavArAthnA (GR), Bryn Oh (CA), Toxic Menges, Traceshops and Spyvspyaeon (PT).
At the same time, thematic conversations by Paula Justiça about virtual art are also in the program beside the performative interventions by the digital performer Pixel Reanimator (UK), with the project Machinic- Babenco and MArmaduke Arado (PT) and Isabel Vilaverde (PT). All are artist interventions referring to the interactive potential available in the metaverso areas.
We should also refer the recording of performative actions that take place in the virtual spaces of conceptual self-representation. These visual recordings, in addition to their historic value, also work as corridors of access between the disconnect of reality and the virtual world. 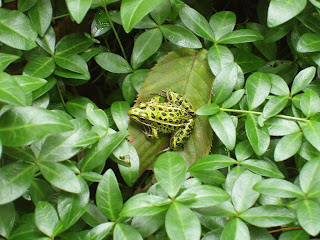 In other news, which is actually not news at all, yesterday I went to a conservation area outside Toronto called Silver Creek and took a picture of this frog.  I also found an Eastern Newt!  I have only ever seen Newts a few times before this and was delighted to find that they are quite content to sit on your hand.  My picture is pretty crappy so I have included a better one which I found on the internet.  I also came across a Millipede as big as my finger, I have never seen one even close to that size before.  Sadly, for some reason I forgot to take a picture of him.