As an artist I will often come across things which almost still me.  Imagery or stories that spark an idea that  will slowly morph into something quite different.  Often the ideas will change into concepts which take up residence in the alternate, almost dystopian societies where many of my stories take place.  In a virtual world I like to create subtle alternative social realities that comment on topics that I find meaningful.
In 2008 for Burning Life (now Burn2) I created a work called Condos in Heaven.  There were two parts to the story.  The idea was that humanity discovered a physical Heaven with a satellite probe launched into the sky.  Below is the poem and a very old machinima I made of the story.


An Astrobot with fame
sent the probes away
now the newspapers proclaim
"We found Heaven today!"

The war is done
the condo's rise
what resources are here to consume?
Sariel appears with tears in his eyes
at the window to my bedroom.

The idea was that once we found Heaven we wanted it.  We wanted to harvest it for resources and erect Condos for the wealthy.    Gods and miracles exist only until our technology demystifies them.
After our victory, in a shop in Heaven a father, in innocence, helps his son pick a set of angel wings.  They don't contemplate how the wings arrived there, and in a secret room in the back of the shop surgeons saw off the wings of an angel.   A businessman wears Galadriels wings as a status symbol, the envy to all around him.
One other concept within the work was of little Beetlebots which secretly hitched a ride up to Heaven and now multiply there.  The idea behind the Beetlebots was that as we harvested our Earth creatures faltered and became extinct.  Each creature that disappeared fulfilled a role within the food pyramid or food chain.  Removing one potentially could cause a domino effect whereby the pyramid could collapse as each is so intrinsically connected to the others.  The Beetlebot represented a placeholder we devised within the chain which would mimic the role of an extinct organism, thus theoretically preventing the collapse.  So it was interesting the other day when Susanna Luminos posted a video on my facebook timeline.  Robobees.

There were two things today which made me think.  For me to sit still and contemplate for a while.  Now I should first mention that I never paint an entire society with a broad brush based on an individuals comments or an image.  Sometime the media is a bit lackluster in putting things into context, as their focus really has evolved over time, as print media dies and income sources dry up, to now strive for online "hits" whose numbers can then be used to inflate advertising prices.  So for example here the newspapers are falling over themselves printing articles of children dying from being left in cars alone.
It is of course a tragedy, and many clicked on the article in horror.  Now I had not seen an article of a child dying in the paper for months before this... but the following day they pronounced that another child died in a car.  Then a day later an article on a child dying in a daycare, then one surviving from a six story fall and so on.  In a country of 35 million there are always tragedies so the media picks and chooses the ones to publish.  The more "hits" of a certain type brings forth more articles on similar ones.  When people reach a point where they can no longer read such sad stories then the hits will drop and they will focus on something else, looking for the new trend.  There is something unsettling to me about this.  I recognize it is a business and they must survive but somehow it seems wrong and manipulative to me.  So according to our papers it would appear children are quite unsafe in Canada, which of course is not the case.  The two things I will relay here are from Thailand and Italy, and I don't for a moment believe they depict the general beliefs of their respective societies.  Every Country has periodic faults with Canada being no exception. 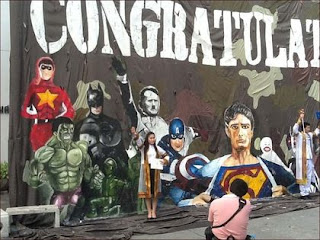 Today I first read about a graduation ceremony where a mural was created based on Super Heroes.  You can see the Hulk, Batman, some guy with a red costume,  Captain America, Superman and... Hitler.  A student is having her photo taken while doing a "Seig Heil" salute.  The Chulalongkorn University in Bangkok released a statement of apologies stating that the students were "unaware of its significance."  Which leads to the question, how is it possible that University students are so unaware of this history?

The next article I read was of comments made by an Italian senator named Roberto Calderoli, who states "I love animals - bears and wolves, as everyone knows - but when I see the pictures of Kyenge I cannot but think of, even if I'm not saying she is one, the features of an orangutan,"
That is in reference to the first black minister in Italy, Integration Minister Mrs Cecile Kyenge.  In 2006, he was forced to resign as reform minister after wearing a T-shirt mocking the Prophet Mohammad during a state news broadcast. Later the same year, after Italy won the soccer World Cup, he disparaged the opposing French team, which he said had lost because its players were "niggers, Muslims and communists".

I am trying to imagine a Canadian politician saying something like this and I just can't.  So I sit and contemplate how it is possible that this person exists in politics.  Two seeds planted and waiting to grow within my dystopian world.
Email Post