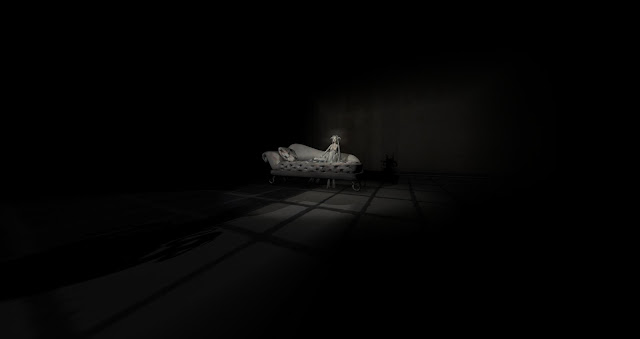 I was contacted by an excited Lapiscean Liberty yesterday with some potentially useful news for daydreamers like me and, if you are reading this blog, probably you too.

So have you ever teleported away from a region and then looked at your radar afterwords to find that all those avatars from the place you just left are still on your radar? usually at some huge distance away like 98,549 meters or whatever.  They show up on the radar for a minute or so until it refreshes and then shows just those who are close by.

Well Lapiscean arrived at his new region and chose "zoom in" from the radar to one of those people at the previous region he was  at, which was half way across the Second Life grid by now.  To his surprise he actually zoomed in on them, two people sitting on a bench chatting.  The naughty voyeur! 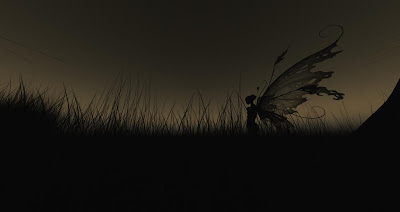 You might be thinking to yourself right now that I tell very boring stories.  And you would be correct, but hold on a moment I am not done.
If we can still essentially be in another place without our avatar present, then I would suppose that we are causing very little lag at that moment at the previous place.  Perhaps none.  You see avatars essentially create the lag in SL.  For my builds I have a general rule where the script time or all the scripts running on my sim combined, range between 3-5 ms.  Then I will limit the number of avatars allowed on the region to something like 15.  Then the artwork generally will run well for everyone, which is necessary for narrative builds like mine.  But add 5-10 more avs and the sim may get crippled by lag.  So for example right now on Immersiva I am looking at a few scripts present here.  A door I see in my script list is costing 0.01ms.  Which is fine.  I have a flying beetle and it tells me that it is costing  0.02ms.  Still fine.  One of the costliest things for script time on my sim currently is a plastic bag in a tree which cycles through a dozen or so sculpty shapes to make it seem like it is fluttering in the wind.  This costs 0.049 ms.  However, there are a few avatars here and they range from 0.342ms to 1.032ms.  So you can imagine how many scripts I can have on the sim before I even catch up to one of those avatars here.

So I know what you are thinking right now... is Lapiscean really a pervy voyeur?  I am not going to answer that question but yes he may well be.  But lets not get bogged down with wondering who is a perv (Lapiscean) and who isn't, please lets just stick to the topic at hand.  (but I think it is safe to say that he is)

Now where was I?  If we can keep our camera on a region while being a huge distance away, causing virtually no lag, could we then not allow literally thousands of avatars on a sim to watch an event without the region collapsing?  Isn't this one of the problems that has plagued the growth of second life since its inception?  Would Radiohead have a concert in SL if 10,000 people attended (10k prims/see below) rather than 50? (provided the sim didn't crash with 50)
Originally Second Life was inspired by the book Snowcrash published in 1992 by Neal Stephenson.  If you have not read that book then you should as it is really interesting to see how closely it describes virtual worlds and Second Life in particular, despite it predating SL by ten years.  In snowcrash he has predicted that residents of the virtual world will have a range of avatars from the highly elaborate to the very basic form.  During events often there would be quite a few of the latter type which acted almost as placeholders for people who didn't come to the event in their high end avatars (in the book).  So presuming  we could leave behind or send forth a low prim/pe unscripted version of ourselves which would act as a camera, then wouldn't it be possible to finally bypass the horrible limitations on large scale events?  Now the problem is that many people love their avatars and want then to be physically at events, so what would be required is to somehow give that low prim representation some character and individuality.  With mesh we can now make pretty impressive things costing a single prim or just a few.  Now I am not a particularly technical person so this is just daydreaming, but I think that there is potential and there are many brilliant residents who might be able to figure this out, perhaps Firestorm developers or Linden Lab themselves.  But one thing is for certain.  If this ever did come to pass then Lapiscean would be very, and I mean veeery, happy.

Sorry Lap, unfortunately for you I am in a teasing mood today.
Email Post

Dividni Shostakovich said…
Umm ... Bryn ... you know I've always supported and even encouraged your fantasy life, but you seem to have forgotten that significant improvements to lag violate TOS.
July 10, 2013 at 5:10 PM

Unknown said…
Brilliant! What a greta idea. Will it work consistently for everyone, is the question. Let me know if you plan an experiment.
-ChingALing Bling
July 10, 2013 at 6:08 PM

Bryn Oh said…
Haha good point Div, I never do read the small print. Well Lap said that it doesn't always work right now, and it didn't for me each time, but perhaps we can take that glitch/bug and turn it into a feature! I mean like we all loved mega prims and sculpts and they were essentially hacks on bugs.
July 10, 2013 at 6:29 PM

Will Burns said…
In a system that predates SL, there was this idea of external camera views. It is a fairly simple trick that is standard fare in gaming (think: security camera)

That being said, I believe a lot of the issue has to do with concurrent and asynchronous updating per user. It's a compound problem, maybe logarithmic curve of complexity or exponential. This likely stems from the centralized methodology of one server having to relay all of the updates and info to all of the other users in the area.

Better to cascade the updates in an area of interest network in a limited p2p manner than having all of the updates resting on the main server. In this case, anyone in proximity would be higher detail but the farther they got outward they would LOD degrade.

Solves a couple of problems while reducing or removing the burden from the central server for it all.
July 10, 2013 at 7:22 PM

Will Burns said…
Typically what you are talking about is using a camera view, which is common for gaming (think: security cameras). The real problem is the centralized system because bandwidth and stress follows a logarithmic (or maybe an exponential curve) for each participant.

In order to accomplish (reliably) what you're after would have to address the root and make an area of interest network on a p2p system in order to alleviate the central system to begin with. Cascade the updates outward and the circles overlap with the proximity dictating fidelity.
July 10, 2013 at 7:26 PM