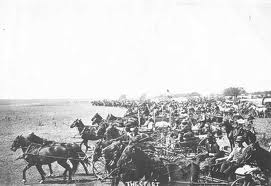 Join the LEA Special Events group and you will be able to see the announcement of when the region(s) are open for the rush.  When it begins find a way to click on one of the big red buttons. Once you've done that, and it tells you that you've won, you're set. If not, keep trying...

1) Join the LEA Special Events group. Because, as you know, this event is special.

2) Wait until October 30th, which is the day of the land rush.

3) On the day of the rush, there will be two announcements on the LEA Special Events group, one at 10 AM, and one at 4 PM. These announcements will let you know that the regions are open.

4) Wear the group tag. You must be wearing the LEA Special Events group tag to claim land.

5) When this announcement is made, teleport to the region and look for the big red buttons.

6) Press a button. When you press a button, and it tells you that you've won, you will have claimed the land.

7) Once the dust settles down, we'll be able to invite you to the land group, and then you can start building.

8) Enjoy yourself, because even if you don't end up claiming some land, we'll do this all over again in 2 months.

Anonymous said…
Dirty never Diablo 3 itemsconcluded his / her subsequent entertaining : we have expect even though that he may appear prior to the conclusion. Otherwise he can expend eternity seeking fresh under gw2 goldgarments within the cesspool. sigh
August 4, 2012 at 1:37 AM