This was a bit fortunate.  I was approached by the great machinimatographer Bobe Schism over a month ago to build a set for the Chinese creation myth of Pan Gu for a Peter Greenaway project.  I wanted a large area to build this and so decided to delete the fifth island for the World Expo and build there.  I deleted the island and built the bones of a large sprawling dead dragon.  Shortly afterwords I sat down to think of what blog posts I had to do in the future and realized that one of them was the fifth island for the world expo which I had just removed.  Gah!  Sadly this isn't terribly uncommon for me but the next part was.  You see I had taken footage of the build months ago! yes I had planned ahead and then forgotten I had planned ahead.  So I have taken all those raw files and made this machinima for the island and hope you like it.

I am going to do a post about the upcoming project with Mr Greenaway, but its full of wonderful SL talent.  If you would like to see the sim created for this project then here is the SLURL http://slurl.com/secondlife/Utopia05/116/32/24 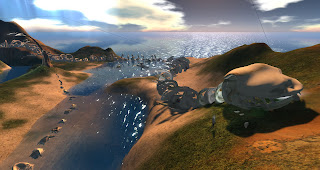 Anonymous said…
I am going togw2 gold perform article in regards to the future venture with Mr Greenaway, but its filled with amazing SL skill. If you want to start to see the simulator designed for this particularDiablo 3 items venture next here's the SLURL
August 14, 2012 at 4:50 AM