The Rabbicorn story part one - The Daughter of Gears 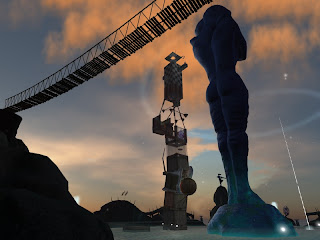 For the next few weeks I am going to recap the Rabbicorn story for those of you who are unfamiliar or unaware of it.  As I reflect on my time in Second Life I believe this to be my favorite work.
The Daughter of Gears was a narrative I thought up after being asked to build something for Rezzable's Black Swan sim.  Black Swan was a wonderful sim filled with the creations of Light Waves / Starax who was a pioneering artist in Second Life.  Sadly much of his work is slowly fading from the Grid but there are some dedicated art collectors who possess pretty much everything he made.
So when I was asked to build something for Black Swan in December of 2008, it was very flattering for me as I didn't think it was even possible to have something other than a Light Waves sculpture there.  I saw him as the greatest artist in Second Life and I was terrified of ruining his sim.  At that time myself and four Yip were being hyped like mad everywhere and there was a sense of pressure to constantly improve over every build. I sat down and spent a great deal of time watching the sim to determine what might fit.  Black Swan itself was full of traps and obstacles.  It felt like there could be a story there, but it had none.  Why are there traps here? who are they trying to keep out? there was no narrative so I devised one.
Soon the narrative began to morph into a story about myself.  A loose diary hidden behind the veil of robots.  A reflection on melancholy and dreams, hopes and fears.  With Second Life being my own personal Standby.   Anyway, I know many of you have English as a second language, so its difficult enough without me having composed the whole story as a poem.  Right now I will just tell the story without all the poems.

There once was a young girl who was very sick.  She grew progressively worse as her mother helplessly watched.  The idea of losing her daughter drove her to a drastic experiment.  As her daughter lay dying she transferred her soul into a vessel to create a now living machine.  A machine with the scared mind of a young child.  What she had done could not remain a secret, and there were many who felt the Daughter was an abomination.  A slight against nature.  Fearing the worst, the mother creates a land of traps and obstacles to protect them, and brings her Daughter of Gears to the top of a tower.  A mob builds and in their perceived righteousness they come to the tower to take the Daughter.
They eventually reach the top to find the mother waiting.  She will never let them take her Daughter and fights them with a great fury.  She defeats them all, but is wounded mortally in doing so.  As she lay dying she looks to her Daughter and realizes that she will now live alone in this tower.  A child robot who doesn't age, therefore living eternally in loneliness.   An outcast who can not fit in.  After her mother dies the Daughter goes into Standby mode much like a computer does.  In her Standby she relives all the memories of her mother and dreams new ones.  One hundred years go by as she stands rooted to the top of the tower.  Vines grow around her feet while the tower slowly deteriorates, but she hides within her standby and dreams.

Skin like lace
A child's face
Eyes of cerulean blue

Your last day
Now faded away
Just my memories and me
And the swaying of trees
If you wish to experience the Daughter of Gears story  I have placed it on my world expo sim Utopia one - no love      http://slurl.com/secondlife/Utopia01/150/10/22 .  Its pretty difficult and I would suggest you do it with a friend so that if you fall you can be tp'd back.  The idea was for the participant to slowly unravel the narrative by finding these poems as they climbed the tower, and once they reach the top to realize that they are one of the mob.  Next week I will talk about the second part - The Rabbicorn.
Email Post

Unknown said…
Sounds lovely. Unfortunately, the YouTube video displays the message, "This video contains content from UMG and INgrooves, one or more of whom have blocked it in your country on copyright grounds." I'm in the US. I hope you can get this sorted. I really enjoy watching your videos.
September 18, 2010 at 5:17 AM

Kandinsky said…
The story together with your build is so beautiful and scary.
I managed the tower by myself as rather new in sl. I fell down several times and had to restart but the magic was so strong, I couldn´t stop.
To discover that piece of art was one of the things that has meant the most for my addiction to sl.
I am glad you still keep it open.
September 28, 2010 at 5:58 PM

Cole Marie said…
>fdsajksahfjkdashfdjkashdfjkas
I thought you had ruined the sim for ages XD hahahaha and now look?
XD
I can be a douche.
I just love Light.
But I love you toooooo
once I got over being cranky and realizing rezzable already ruined that sim long before I finally could appreciate your stuff >.<

Eren Padar said…
I love the Daughter of Gears and Rabbicorn story; such basically simple plots filled with such emotion-- as the best stories are. The artwork is impeccable and creative, far beyond the range of my imagination but still finding that commonality of recognition necessary for work like this to achieve its goal. Wondrous stuff.

Anonymous said…
I love the Girl regarding Things and also Rabbicorn Cheap wow goldaccount; such fundamentally straightforward burial plots full of this kind of emotion-- because very best stories are. The particular art can be impressive and inventive, beyond the range of my personal imagination but still finding that common function associated with identification neededBuy rs gold for function this way to accomplish it's objective. Marvelous products.
August 14, 2012 at 4:49 AM